Aaron Finch stunned the world by smashing 156 off only 63 balls in the first T20 International (T20I) against England at Southampton. Nishad Pai Vaidya examines his technique, experience during the Indian Premier League (IPL) 2013, and what it means for the Australian one-day setup. 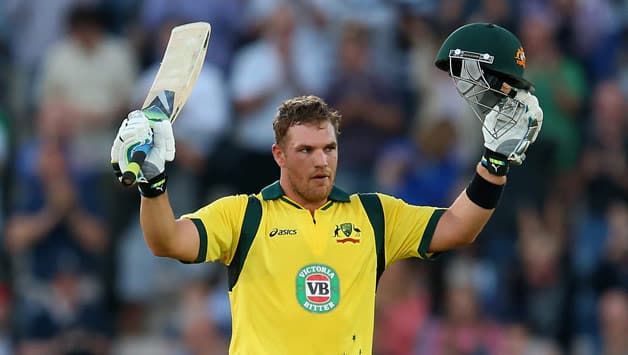 While Aaron Finch’s latest ton was a breath of fresh air, there would always be scepticism when a batsman announces his arrival with a big innings in the shortest format © Getty Images

Aaron Finch stunned the world by smashing 156 off only 63 balls in the first T20 International (T20I) against England at Southampton. Nishad Pai Vaidya examines his technique, experience during the Indian Premier League (IPL) 2013, and what it means for the Australian one-day setup.
During the Indian Premier League (IPL) 2013, a little known right-hander from Australia replaced the classy Michael Clarke at Pune Warriors India. That the beleaguered side handed him the reins of leadership in the middle of the campaign — ahead of other experienced players — surprised many. However, he didn’t disappoint even as his team failed to live up to their billing. Instead, he led from the front and was amongst the top 15 run-getters in the tournament. There was something about Aaron Finch that caught the eye during the IPL 2013. But three months down the line, a breathtaking performance at the highest level was to take the expectations to a new high.

Finch has been a part of Australia’s limited overs plans for the last three years and only got more chances this year. The right-hander is balanced and compact at the crease. Maintaining a still head, he uses all his power to muscle the ball around the ground. It isn’t slogging, but proper hitting on show. Anything pitched in his half is attacked with a positive movement forward. When the ball is on a length, he waits for it and picks it in front of him. Some might say that he is over-attacking at times, but Finch has shown that there is more to his game than that.

During his record-breaking run-feast against England at Southampton, Finch combined all the elements of his game to script an epic. Even when he moved across the crease, he maintained his shape and was ready to get his bat to the ball. It is one thing to slog, but another to use your power. His bat comes down hard at the ball and the positive thing is that he tends to play straight on most occasions. It is only when it is a bit short, that he is ready to heave across the line.

While his innings of 156 was a breath of fresh air, there would always be scepticism when a batsman announces his arrival with a big innings in the shortest format. Remember Richard Levi? The South African smashed the fastest T20 International ton in only his second game and was being spoken of as the next big thing in the shortest format. However, when he arrived at the IPL 2012, his form withered away after a good start. The spinners got the better of him and Dale Steyn also exposed certain short-comings in his technique.

Keeping that in perspective, the Australian fan would be wary of passing a judgment on Finch. One thing they should consider is that his case is unique. While Levi’s T20 International ton won him franchise contracts, Finch has spent time in different T20 leagues before his big moment. Also, Finch has shown promise and a sense of stability in his domestic outings. During the Big Bash League 2012-13, he smashed a hundred against the Melbourne Stars and dealt with Shane Warne comfortably. During the IPL 2013, he adjusted to the relatively slower surfaces well and scored 456 runs.

From the outside, he seems to be a calm cricketer, who is in control of his emotions. It is unusual for a player with little international experience to captain a side at the IPL. Pune had a horrendous season and lost the plot at crucial intervals. Yet, Finch maintained his cool and marshalled his troops decently well. The results may not reflect it, but he had done a good job — leading the likes of Yuvraj Singh, Angelo Mathews etc. He also led the Melbourne Renegades at the BBL last year.

Having represented Australia at the Under-19 level, Finch was waiting for his chance in international cricket. In 2011, he did score a good fifty against England at Melbourne in a T20, which wasn’t enough for him to seal his spot. However, the power of this innings makes it impossible to ignore him and Australia would certainly persist with him in the near future. It is only a question of consistency for Finch — an area where many ‘instant successes’ falter. There is one thing for sure though. The IPL sides would be lining up during the auction next season. All they need is one stand-out performance to convince them.