3 run-out dismissals inflicted by India in this match, the most for them in a Champions Trophy match.

6.67 batting average of AB de Villiers in this Champions Trophy, his worst in any series or tournament with a 3 innings cut-off. This is also the 2nd-worst average by a South African captain in a series or tournament, after Jacques Kallis (5 in NatWest Series against England in 2008).

5 Indian bowlers picked at least one wicket in this match. This is the 8th time five Indian bowlers took one or more wicket each in a Champions Trophy match and the 2nd time against South Africa, after 2000. Overall, this was the 29th time India did this in an ICC ODI tournament, the 3rd-most by a team after Australia (32) and Sri Lanka (30).

6 fifty-plus scores in Champions Trophy for Dhawan, the joint-most for any player along with Dravid and Ganguly.

0 score between 50 and 99 for Quinton de Kock against India in ODIs before today. In 10 innings before today he had gone past fifty 5 times and had reached hundred on every single occasion. This is the first instance of him getting dismissed without converting it to century.

2nd-lowest total for South Africa in Champions Trophy 191. Their lowest is 175 against England in 2013, which also happened at The Oval.

7 run outs for de Villiers in ICC ODI tournaments, joint 2nd-most by any player along with Rahul Dravid. Inzamam-ul-Haq holds the record with 9. In Champions Trophy, de Villiers is at joint 2nd-spot too with 3, along with Mahela and Tendulkar. The record is 6 by Dravid.

3 wicketkeepers to have claimed 50 dismissals in ICC ODI tournaments before MS Dhoni. Dhoni reached the landmark with the catch of Morne Morkel. The other three wicketkeepers to achieve this are Sangakkara (87), Adam Gilchrist (77) and Mark Boucher (50). 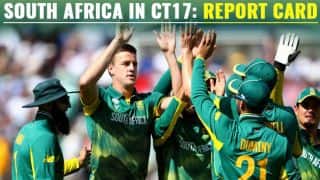