'ABD' is the epitome of the modern great batsman, who blends innovation and serenity.

AB de Villiers, born February 17, 1984, is without doubt the best batsman in the world in both the major formats of the game. Arunabha Sengupta takes a look at some of his phenomenal achievements till date.

AB de Villiers is nothing short of a sensation.

In short, he is the face of the modern cricketer — the batsman who knows no limits to strokeplay, for whom audacity is no fetter for temperament. He is someone who can rule the batting world in Test cricket while still remaining the best exponent of the reverse sweep and perching at the pinnacle of One-Day Internationals as well. And his job does not end with putting runs on the board.

A hundred and a world record equalling eleven catches in the same Test match just about manage to scratch the surface of his versatility. Even when he does not don the big gloves, he remains an electric fielder — perhaps the best produced by South Africa since Jonty Rhodes. And one knows this is tantamount to outshining a constellation of extraordinary brilliance — the Protean cricketers have not exactly dragged their feet since the days Rhodes patrolled cover point.

At home against the fastest of bowlers, and twinkle toed against the canniest of spinners, de Villiers has faced the sternest of tests in every land and each time he has come through in flying colours. He touches 30 today, the age at which the best of batsmen start off on their greatest stints. And already his feats are legendary.

There are plenty of them — from the 217 in Ahmedabad to propel South Africa to a rare victory in India to many other match-winning efforts such as the 174 at Headingley, the 106 at Perth and the hundreds against Australia at Johannesburg and Cape Town. He scored 278 not out against Pakistan at Abu Dhabi to become the highest scorer in a Test innings for South Africa before Hashim Amla slammed his triple-century at The Oval. And then there was the little thing of not scoring his first duck till a world record 79th innings.

In the ODI domain, his 146 in the 2007 World Cup against West Indies, the 59-ball 102 at Motera and the 85-ball 121 against England at Cape Town are just some snapshots of his limitless brilliance. It was natural that South Africa looked to him as captain of the side after Graeme Smith stepped down as skipper in the shorter version following the ICC World Cup 2011.

And in keeping with the demands of the age, de Villiers also made his mark in the Indian Premier League in style, hammering a 54-ball 105 for Delhi Daredevils against Chennai Super Kings.

It is not a far stretch to say that de Villiers stands as the best batsman in the world today. He deservedly reached the peak of the ICC Test rankings in March 2012, and, after a dip towards the latter part of the year, has been roosting at the pinnacle since October 2013. In ODIs, he climbed to the top in May 2010 and, but for minor dips, has remained there ever since.

In the ODI table, de Villiers leads the field in terms of both average and strike rate. In fact, 4129 runs at 61.62 with a strike rate of over 100 is nothing short of miraculous.

Problems with his back and responsibility on his shoulders have prevented de Villiers from keeping wickets too often. In Tests, he has crouched behind the stumps in just 19 of his 90 outings. In ODIs, he has kept in 56 of his 159 games. However, he has not given up the bigger gloves in either of the formats. When the situation has demanded he has stepped back behind the stumps and flung himself through the air to pouch unbelievable catches.

While choosing the best wicketkeeper-batsman of all time, people have generally plumped for Adam Gilchrist — whose revolutionary brilliance in front of the stumps probably made the biggest impact on the fans. A good proportion vouches for Andy Flower’s unquestionable excellence as well.

There have been other supreme batsmen who have kept wickets, Kumar Sangakkara and Clyde Walcott being two defining examples. However, in the cases of both these sterling batsmen, their Test averages in the high 50s drop to a less than great 40 whenever they also take up positions behind the stumps. It is no easy task to bat as well as keep in Test matches.

Incredibly, in the 19 Tests he has kept wickets, de Villiers has performed splendidly with the bat, leading the field ahead of both Flower and Gilchrist.

Best wicketkeeper-batsmen in the history of Test cricket

Just 19 Tests as stumper may be considered small as far as sample size is considered, especially in comparison with Gilchrist and Flower. However, there are undeniable claims of de Villiers as one of the very best ever.

In ODIs this claim is even stronger. Indeed, an average of 68.32 and strike rate of 97.50 over 56 ODIs and 2733 runs is nothing short of phenomenal. There can be little competition when it comes to the choice of wicketkeeper for any All-time ODI XI.

In short, he is a gift to the game of cricket. And the sport is lucky that de Villiers decided to bestow his incredible talent on the 22 yards rather than in golf, tennis and rugby, in each of which he might have excelled with the same élan. As Telford Vice puts it, “All AB de Villiers needs to show off his abundant gifts is a ball. Just about any ball.”

Surely many a year lies ahead through which we can revel at his delightful drives, breath-taking reverse sweeps and electric fielding and running between the wickets. 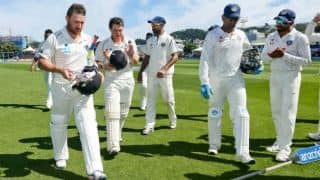 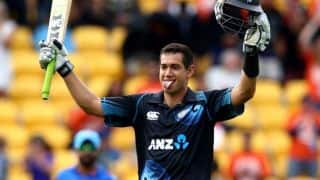