AB de Villiers' was dismissed for his third consecutive duck in the 2nd innings of the 4th Test between South Africa and England.

Test captaincy is more than just a position in a team. It takes a special level of ability to lead a side by example in the five-day format, aside from excelling as a batsman or bowler. Current South African skipper AB de Villiers has led his side admirably in One-Day Internationals (ODIs), recording some of his most memorable knocks as captain. However, his tenure as Test captain has taken a serious beating so far since taking over the role from Hashim Amla. De Villiers was handed the responsibility ahead of the third Test of the ongoing series between South Africa and England at Johannesburg. It turned out to be a nightmarish start for him, as the Proteas got hammered by seven wickets to concede the series, with de Villiers recording three consecutive ducks since then. FULL CRICKET SCORECARD: South Africa vs England 2015-16, 4th Test at Centurion

Indeed, there are few names in the world who have managed to captain their sides to Test glory and score runs heavily — Ricky Ponting and Graeme Smith are a couple of names in this regard. Smith, the most successful captain of all time, was a blessing for South African cricket as it was his revolutionary and inspirational leadership that took the Proteas to new heights, becoming the No. 1 Test team under his reign. He also scored more than 90 per cent of his 9,265 career runs as skipper. On the other hand, Ponting averaged 51 with the bat in the 77 Tests that he captained Australia in.

The Proteas’ search for the next Test leader following Smith’s retirement in 2014 has been fruitless. Hashim Amla reluctantly accepted the role ahead of the 2014 tour of Sri Lanka, and his batting form took a little beating thereafter. Unable to cope with the pressure, he finally gave up the position after a lot of consideration following the second Test against England at Cape Town. The reigns were thus handed over to de Villiers, who has been the most incredible South African cricketer by far in the last few years purely in terms of performance.

However, it was in the days leading to the Basil D’Oliveira series against England at home that de Villiers began to start complaining of the work overload, especially after he had to don the wicketkeeping gloves for the first Test due to the absence of either Quinton de Kock or Dane Vilas. The mental pressure on his head grew to the extent where he did not categorically rule out the possibility of retirement from the five-day format in the near future, though he later cleared the air by putting such speculations aside.

While de Villiers’s Test captaincy could not have started on a worse note — with a string of ducks as well as a staggering defeat — it does not necessarily deem him unfit for the role. Let us not forget the fact that he was brought in as the skipper on standby mode following the sudden resignation of Amla, and that a couple of Tests are not enough to measure his calibre as Test captain.

De Villiers scored 36 in his first innings as Test skipper, the score of which could have been much higher had it not been for the rash shot that he played off a short-pitched delivery from Ben Stokes down leg side. This was the same man who had scored a brave 49 in the first innings of the Durban Test, and scored a patient 211-ball 88 at Cape Town. It is still too early to suggest that de Villiers’ form has gone to the dogs, and that he is not fit for leading the side in the five-day formats. Let us not forget that this man has been nothing short of a ‘Superman’ for his side in recent months.

His ducks thereafter have occurred due to poor shot selection and a lack of concentration, and de Villiers is entirely to blame for it. However, a sudden decline in form is no indicator of a star batsman not being able to handle one of the toughest jobs in cricket. Legendary captains such as Allan Border had to deal with a few low scores as well as defeats at the start of his tenure as Australian captain. At the same time, there was Smith who smashed two double-centuries and a fifty in his first five innings as the South African Test leader.

Maybe the fans and the team management need a little more patience and faith. Maybe the team management and administration need to manage the national side better, in order to reduce the workload on star players such as de Villiers. De Villiers himself has expressed long-term interest in captaining the side in Tests. Let us wait at least till the home series against New Zealand on home soil, before we make demands for his sacking. 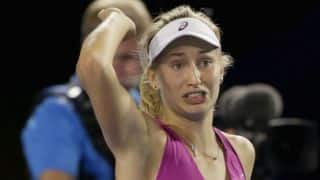