Abdul Qadir: 20 facts about the Pakistan spin wizard who danced his way to glory

Abdul Qadir: 20 facts about the Pakistan spin wizard who danced his way to glory

Abdul Qadir Khan is a former Pakistan leg-spinner, who was instrumental in reviving the dying art of leg spin.

Born September 15, 1955, Abdul Qadir Khan is a former Pakistan leg-spinner, who was instrumental in reviving the dying art of leg spin. A combative cricketer, Qadir was said to have six different deliveries per over. On his 60th birthday, Chinmay Jawalekar recollects 20 facts about the bowler, who won many a game for his country with his impactful bowling.

1. Forgettable Test debut : Qadir had an ordinary Test debut against England in December 1977, where he scored 11 with the bat and took a solitary wicket of England s No. 11 Bob Willis.

2. Spectacular ODI debut: He was brilliant in his ODI debut against New Zealand at Edgbaston during the 1983 Cricket World Cup. With his all-round performance of 12-4-21-4 and 41 not out, also the top score of Pakistan s innings, he was adjudged the man of the match, albeit in a losing cause.

3. Imran s prot g : Imran Khan, arguably Pakistan s greatest captain ever, mentored many a youngster who went on to serve the Pakistan cricket for a long time. Wasim Akram, Waqar Younis and Inzamam-ul-Haq are the prominent examples. Qadir too was influenced deeply by Imran, who was one of the few capable of getting the best out of Qadir on the field.

4. England s tormentor: Qadir seemed to have a perpetual as he had a particular liking for Englishmen. At The Oval in 1987, Qadir’s ten-wicket haul ensured a series win over England. Three months later, in the next home series against the same team, Qadir took 30 wickets in 3 Tests including the best bowling figures in an innings by a Pakistani 9 for 56 runs at Gaddafi Stadium, which is also his home ground. He also took 13 for 101 in the Test, which are the second-best by a Pakistani after Imran s 14 for 116.

5. The wizard: Before the master of leg spin Shane Warne arrived on the international scene, Qadir was known as a wizard of spin bowling, mainly because he was the flag-bearer of the rare art in the era dominated by fast bowlers. Warne has emphasised on the fact that Qadir was the inspiration behind his rise.

Steve Waugh later approached Qadir to coach his trump card. Warne recollected an incident in his autobiography. When he visited Qadir, idol and an awe-struck fan got together, bowling fruits on the carpet to show each other their repertoire. That must have been an encounter to die for.

Warne was not the only one: Andy Flower asked Qadir to coach Paul Strang as well.

6. The Kumble story: Like Waugh and Flower, Tendulkar took his ace spinner to Qadir as well. At that stage of his career Kumble strived for more turn, but Qadir advised him against it: You want me to tell you how my ball will break more, but I want to tell you that your ball will never break more in your whole life. But you keep bowling variations. In the first three days of a Test this will come in handy for you.

7. Imran and the wizard: Imran did not want England to fathom the magic of his secret weapon in 1982. In order to add to the mystique and add to the Wizard of the East aura, Imran asked Qadir to spot a goatee for the tour.

8. Wide repertoire: Qadir had a wide range of deliveries in his repertoire. He mastered the googlies, the flippers, the leg-breaks and the topspins. Variety was the key to him as it was said he had six different deliveries per over.

10. The predictor: In November 1989, in a warm-up match played before the first Test against India at the National Stadium, 16-year-old Tendulkar hit four sixes off a Qadir over. Later on the same day, Qadir predicted that Tendulkar would become one of the greatest batsmen, a prophecy that came true.

11. Fierce competitor: A feisty character on the field, Qadir’s appetite for the fight could not be questioned and it often came out in his batting. He played a few combative innings, once taking 16 off Courtney Walsh’s last over to win a crunch match against West Indies in World Cup 1987.

12. Good-bye to cricket: With the rise of his prot g Mushtaq Ahmed, Qadir faded away in early 90s. He played his last Test in 1990 at his home ground and wasn t considered for World Cup 1992 that Pakistan won. He earned a surprise recall in Pepsi Champions Trophy, Sharjah as late as in 1993-94. He picked up a wicket against West Indies but twisted his ankle during his eighth over against Sri Lanka and never played international cricket again. He returned to First-Class cricket four years after his retirement and his magic still remained the same.

13. Qadir the commentator: Qadir later turned commentator, but his stint ended on a rather bizarre note. Talking with Hasan Jalil on a Pakistan Television (PTV) show in 2004, Qadir said: “We all know the ball has always been made up [tampered with] by Pakistani fast bowlers, but with so much scrutiny on this series, this has not been possible.” PTV cancelled his contract stating that “We are a national network and we have certain codes of conduct on what can and cannot be said on air. By talking about ball-tampering and claiming that every successful Pakistani bowler had ‘made’ the ball, he was damaging national pride, and that is against our policy. So we dropped him.

14. Jinxed term as Chief Selector: Qadir s term as the Chief Selector of the Pakistan Cricket Board wasn t a fruitful one. He replaced Saleem Jaffar as chief selector in November 2008 for the series against India. A series of three Tests, five ODIs and three T20Is was scheduled to be hosted by Pakistan, but it never happened due to the deterioration of both countries’ diplomatic relationship after the 2008 Mumbai attacks. His next assignment was for the home series against Sri Lanka a tour arranged hastily as replacement for the cancelled India tour. The series was abandoned following an attack on the Sri Lankan team in Lahore during the second Test. Qadir resigned from the post in June 2009 without explaining any concern.

15. Hailed by legends: Widely regarded as the best spinner of his generation, Qadir was included in Richie Benaud’s Greatest XI shortlist of best players across countries and eras. Graham Gooch had also once famously said that “Qadir was even finer than Shane Warne”.

16. Guru Qadir: Since retirement Qadir has run a private academy near Gaddafi Stadium in Lahore and has coached many budding leg-spinners in the country. His role in the rise of Mushtaq Ahmed, and, to a lesser extent, Danish Kaneria (whom he calls his product) has been instrumental. Imran Tahir, too is a student of Qadir, and keeps visiting him for tips from time to time.

17. Action s legacy: Qadir’s action was eye-catching and immensely effective. Such was its impact that every aspiring leg-spinner in Pakistan tried imitating him with varying degrees of success. Mushtaq and Tahir s bowling actions also resemble Qadir s.

18. Cricket in the blood: Qadir s four sons Rehman, Imran, Suleman and Usman have followed him into the game. Interestingly, all of them took to leg-spin bowling barring Suleman, who preferred off-breaks over leg-spin. All four of them have been trained by Qadir and have played First-Class cricket. Qadir s brother too played for the Water and Power Development Authority.

Besides, Qadir s extended family too has cricketing connections. His daughter Noor Amna is married to batsman Umar Akmal. The youngest amongst three brothers, Umar first laid eyes on Qadir s daughter in her brother s wedding function and that was when the cupid struck. The two got married in 2012. Umar s elder brothers Kamran and Adnan have also represented Pakistan s national cricket team.

19. Police raid: In September 2014, Qadir’s house in Lahore was raided by police in connection with an ongoing crackdown on workers of cricketer-turned-politician Imran Khan’s Pakistan Tehreek-e-Insaaf party. Qadir has been an avid supporter of Imran right from his playing days.

Millennium 2000 No. 3 Sportsman from All Sports (The Sunday Times England News Survey)

Founder of Cricket Academy in Pakistan 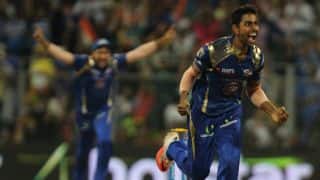