Adam Voges: 10 interesting things to know about the Australian who made a late entry to Test cricket

Adam Voges: 10 interesting things to know about the Australian who made a late entry to Test cricket

Adam Voges, born October 4, 1979, is one of Australia's oldest ever Test debutants.

Adam Voges, born October 4, 1979, is one of Australia’s oldest ever Test debutants. A compact batsman capable of batting quickly and a steady left-arm spinner, Voges is a domestic workhorse who has come through the ranks of Australian cricket. On his 36th birthday, Shiamak Unwalla lists out 10 interesting things to know about a man who had a late but fruitful start to Test cricket.

1.  Fastest 100: Voges announced himself on the Australian domestic circuit with a 62-ball century for Western Australia against New South Wales in 2004-05, then the fastest ever one-day century in Australian domestic cricket. Brad Haddin, who was playing for the opposition in that game, went on to say, “That is the first time we have had a look at him. I am not sure if we want a second look.”

2.  The $50,000 six: As if Voges’ record-breaking century was not enough, he also managed to earn AUD 50,000 with a single shot! Voges hit a ball from Stuart MacGill for a flat six over midwicket, and the ball hit the sponsor’s hoarding, which earned him the money.

3.  Surprise call-up: Voges was always a consistent performer, but would hardly have thought that he would get a call-up to the national side in 2006-07. Damien Martyn’s sudden retirement meant that Australia were a man short, so Voges was called up to the Test side as cover for him. He did not get to play, and was subsequently overlooked for the next eight years.

4.  Seasoned campaigner: Voges is prolific in domestic cricket. Though he has played for a lot of sides, it is with Western Australia and Nottinghamshire that he has gained the most success. In over 100 matches for WA he has scored over 7,000 runs at an average of around 45, while for the Notts he scored over 2,700 runs in over 40 matches at a similar average. He has also had a productive stint with Middlesex, for whom he still turns up.

6.  Never too late: Voges was a late entrant to Test cricket; after being called up as a youngster as cover for the recently-retired Damien Martyn, he had to wait for as many as eight years before finding a spot in Australia’s Test squad. When he finally got to make his debut, it was a memorable one. Coming in at 61 for 3, Voges rescued Australia after they slipped to 178 for 8. He scored a superb unbeaten 130, adding 140 with Nos 10 and 11 as Australia romped home by nine wickets.

7.  The swift VC: Remarkably, after just seven Tests Voges found himself in line for Australia’s highly-coveted Test captaincy. With Brad Haddin having retired and David Warner out with an injury, the role of Australia’s vice captain fell to Voges on Australia’s tour of Bangladesh in 2015. Sadly, the series was called off before Australia even left their home due to security concerns in Bangladesh. Had fate intervened, Voges could have become Australia’s 46th Test skipper.

8.  45-and-above: Though his sample size is quite small, Voges has the distinction of being one of the few batsmen to enjoy an average in excess of 45 in every international format of the game. The only other batsman with a comparable average in all three formats is Virat Kohli. Though they are both still active players and therefore liable to a fluctuating average, as of October 4, 2015 Kohli and Voges are the only two batsmen who enjoy an international average of over 45 in all three formats.

9.  Similarities with pup: Like his former Australian captain Michael Clarke, Voges is a right-handed middle-order batsman who bowls part-time left-arm spin, and who scored a century on Test debut!

10.  Love over duty: Voges might not look it, but he is quite clearly a romantic. He chose to opt out of Australia’s tour of South Africa in 2009 in order to get married!

In a first, women cricketers to get BCCI central contracts 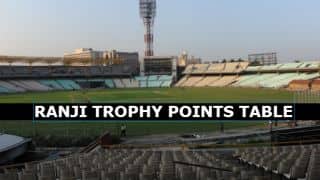 Ranji Trophy 2015-16: Points Table after first round of games