By end of 2017, world cricket doesn't only know Afghanistan for its' hostile condition back home, but is aware of the national side's elevation gaining momentum.

Afghanistan, officially the Islamic Republic of Afghanistan, is a landlocked nation between South and Central Asia.

Did you know, Afghanistan is 41st-largest in area and 42nd-largest in population in the world?

And like many other nations, Afghanistan has its share of dark history. It became a buffer state towards the end of the 19th century. In other words, it remained sandwiched between two superpowers, Britain and Russia. Ever since the Anglo-Afghan War of 1919, the state has gone through a series of civil wars that continue to devastate peace. Amidst all this, cricket for them serves as a window to the outside world.

Afghanistan, in 2017, ended their probation period in world cricket and attained new glories. From winning the InterContinental Cup, to their players gaining eyeballs in IPL, and attaining the ‘Test status,’ Afghanistan have come of age. Afghanistan moved ahead of their associate nation-rivals, and entered the main league. Today, world cricket doesn’t only know Afghanistan for the hostile condition back home, but is aware of the national side’s elevation garnering momentum.

Afghanistan started 2017 campaign in style. Playing in the inaugural edition of Desert T20 in UAE, Afghanistan emerged victorious by beating Ireland in the summit clash. They remained unbeaten in the tournament, and showed they are a step ahead of their competition among Associate Nations. While the likes of Mohammad Shahzad and Mohammed Nabi continued to hog limelight, 18-year-old Rashid Khan broke into the scene with his unorthodox leg spin.

Prior to the tour, Zimbabwe had never beaten Afghanistan in bilateral ODIs. Having a head-to-head record of 6-8, Zimbabwe were keen to go the distance this time around. Trailing 0-2 in the third ODI of the five-match series, Zimbabwe tied the series, 2-2, ahead of the series decider. Till then, skipper Asghar Stanikzai and Rahmat Shah did the talking with the bat, whereas Gulbadin Naib and Rashid Khan deceived the opponent occasionally. Nonetheless, Afghanistan turned up as a complete unit in the fifth ODI. Zimbabwe folded for their lowest total versus Afghanistan.

However, the story didn’t end there. Rashid getting the better of Ben Stokes, Marlon Samuels and Lahiru Thirimanne in 2016 World T20I had made a name. He continued to outfox the opposition batters through his wrong’ uns and extra pace. As a result, Rashid was sold for INR 4 crore to SRH.

Nabi and Rashid became the first Afghan duo to take part in IPL. Rashid took 17 wickets and ended IPL 2017 as the sixth highest wicket-taker. Nabi wasn’t a regular in the lineup, but returned with 2 scalps from 3 encounters.

BCCI’s healthy relationship with Afghanistan cricket board resulted in the latter adopting Greater Noida Sports Complex Ground as their home ground. In process, Afghanistan got a wide platform and a feel of playing in India. It was a historic moment, and Afghanistan locked horns with Ireland for three T20Is and five ODIs.

Afghan fans turned up in large numbers. During my first stint of reporting live from the venue, I interacted with a fan. Iqbal stated, “Inshallah, India ne humme khelne ke liye ground diya hai. Hum duniya ko ache cricket khelke dikhayengey. [By God s grace, India have given us a ground. Our players will play good cricket and show it to the world].

Afghanistan lived upto fans’ expectations, and defeated Ireland in both the series. The T20Is was a close-knit affair, but Irishmen came second in all attempts. On the other hand, the five-match ODIs went down the wire, resulting in a 3-2 series victory for ‘hosts’ Afghanistan.

Rashid was the feature of the series. He gained strides by virtue of his leg spin. He accounted for 9 wickets in the three T20Is, including a 5 for 3. In ODIs, Rashid tormented the Irishmen with 16 wickets, 2 four-fors and a five-wicket haul. On flat tracks at Greater Noida, Rashid took Irishmen by surprise. He hurried them up with his extra pace and bowled googlies at will. Stanikzai used him as the fifth bowler only to strangle Ireland in the death overs. Barring Paul Stirling, no one differentiated between his wrong’ uns and off cutters.

The overused phrase passionate about cricket actually holds for Afghanistan. Cricket drives Afghanistan more than any other nation. Cricket keeps them going despite the distress of violence and uncertainties. Cricket is almost synonymous to them as breathing is to a person.

In my month-long experience in Greater Noida, during Afghanistan-Ireland series, I realised that cricket is their only cure from the atrocities back home. In the run-up to the series, Afghanistan were jolted by a terror attack in Kabul hospital.

“In my nation, we hear news of some terror strikes (referring to the Kabul hospital attacks) very frequently. It is definitely not pleasing. But when we see our cricketers we tend to forget our worries. They make us proud. We are striving hard for an image in the world and they are the biggest contributors in it. They are our only hope. The Shahzads and Nabis and Rashids are our peace ambassadors. Our nation rises every time they win. They make us feel at ease , said Najeeb Zadran, with a tinge of emotion in his voice.

And then the shocker…

Shahzad The MS Dhoni of Afghanistan was provisionally suspended by ICC for doping charges. He was charged on April 13. The 29-year-old, who had the option of challenging against the charge in 14 days, decided not to challenge the provision suspension as well. Later in the year, ICC’s statement revealed Shahzad had “inadvertently ingested the prohibited substance, as a contaminant of a weight-loss product he was taking, Hydroxycut.” The global governing body had adjudged that Shahzad has been suspended from all cricketing activities for a year after pleading guilty to breaching Article 2.1 of the ICC Anti-Doping Code.

West Indies failed to qualify for 2017 Champions Trophy. As a result, they invited Afghanistan for a short series. The itinerary for the tour was: three T20Is and ODIs. This was Afghanistan’s maiden experience of the Calypso music, and visit to the Caribbean island for international cricket.

Do you remember, Afghanistan was the only side to defeat West Indies in 2016 World T20I?

Afghanistan wanted to commence from where they left in World T20I. Nonetheless, it wasn’t the case. The slow tracks at West Indies tested their batsmen. Playing too many shots did not help their case either. West Indies whitewashed the T20Is, but the ODIs ended at at 1-1 (third ODI being washed out).

Did you know this was Afghanistan’s maiden ODI series versus West Indies?

Naib and Javed Ahmadi were the top performers with the bat. Rashid scalped 10 victims and continued his glorious run in ODIs.

Ever since Afghanistan cricket started gaining momentum, they had their eyes set on attaining the coveted ‘Test status’. Playing the longest format completes every cricketer’s wishlist. After years of audition, ICC granted both Ireland and Afghanistan a much-awaited promotion. Afghanistan and Ireland’s elevation have given them a massive pedestal to rub shoulders against the major teams of the cricketing fraternity.

Having gained ODI status in 2009, Afghanistan took eight years to attain full membership. “Another day that we can lock in our history and be proud,” Shafiq Stanikzai, ACB chief executive told ESPNCricinfo. “Every achievement is great, but it opens the door to challenges. We’ll be hosting our international matches in Greater Noida and Sharjah, there should be a day when we can host inside Afghanistan,” he added.

Next target: Playing in Afghanistan?

Rashid not only shone with the ball (7 wickets), he ended as Afghanistan’s second highest run-getter behind Rahmat Shah. In addition, Afghanistan got another young prodigy in Mujeeb Zadran. The 16-year-old off spinner ended Afghanistan’s year with another riding shotgun, claiming a four-for in his debut match (series opener).

BCCI CEO Rahul Johri dropped a bomb on December 11, 2017. He announced that India will welcome Afghanistan to five-day cricket as their opponent in their debut Test. While the venue is yet to be announced, Afghan fans cannot stop rejoicing as their Test debut would not have gained much impetus had the opponent been someone else. 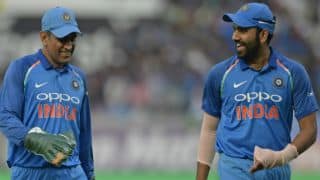