Both Ireland and Afghanistan retained the same XI for the 3rd ODI on Sunday. Will they do the same in the upcoming encounter?

It was a pleasing victory for Ireland in the third ODI of the five-match series versus Afghanistan. They not only notched up their maiden triumph on tour, but also stopped a rampant Afghanistan side from clinching another series win. The Asian team already have the longest winning streak in T20Is (11), including five consecutive wins versus Ireland. Coming to the ODIs, they won three back-to-back games (2 in this series), but everything came to a halt on Sunday. The Irish side will like to make further inroads by gaining some momentum and keep the series alive in the fourth ODI. The last game saw both sides with an unchanged XI. Will we see the same 22 players take the field on Wednesday? Let us have look. Full Cricket Scorecard, Afghanistan vs Ireland, 4th ODI

Top order: Mohammad Shahzad and Noor Ali Zadran have been pretty decent at the top. The duo faltered in the previous tie, and will be raring to stage a comeback. Rahmat Shah will continue to hold forte at No. 3. He got back-to-back fifties in the opening two encounters, but fell for 8 on Sunday. Nonetheless, the trio will be expected to come good after their first blip in the series.

Asghar Stanikzai registered his maiden international ton in the second ODI. However, he fell to the law of averages and got out for 16 off 21 balls in the next outing. He will continue to back himself at No. 4 and play according to the situation.

Middle and lower order: Samiullah Shenwari, yet again, came ahead of Mohammad Nabi at No. 5 in the last match. Even if the ploy did not work, Nabi will bat at 6, where he can also use the long handle in the end. At 7, Gulbadin Naib scored a brilliant 51 off 76 balls in the third ODI.

Naib will continue to provide solidity in the lower order. He will be followed by Afghanistan’s trump card Rashid Khan, who struck a valiant 96-run stand with Naib for the seventh wicket and bailed his side out on Sunday. Shafiqullah Shafiq, demoted down the order, was magnificent scoring an unbeaten 50 off 28 balls, and will again come at 9. The Asian side’s last 4 wickets added 167 runs in last 23.5 overs, and the camp will not like to tinker with the line-up much.

Dawlat Zadran and Amir Hamza will fill in the remaining spots at No. 10 and 11 respectively.

Bowlers: Afghanistan have enough firepower in their bowling attack. Zadran has chipped in with valuable scalps, whereas Naib has been a bit unlucky. Hamza will lead the spin department along with Rashid, who went wicketless for the first time in the tour. On the other hand, Nabi and Shenwari are handy with their part-time spin as well. Ireland played out Rashid’s overs smartly and hence earned a 6-wicket win, but will have to remain consistent against a youngster who is making headlines for all the right reasons lately.

Afghanistan need not panic after their first loss on tour. They will like to retain the same XI and take an unassailable lead in the five-match series.

Top order: Ed Joyce has been inconsistent in the ongoing series. He will like to step up in the two must-win games for his side. He will open the innings with in-form player Paul Stirling, who has been in a rollicking form. With three back-to-back fifties (inclusive of two consecutive 90s), Stirling has kept hopes in Irish camp, winning two Man-of-the-Match awards. He will like to continue his dream run and level the series on Wednesday. William Porterfield and Niall O’Brien will come in at No. 3 and 4 and take Ireland’s innings forward.

Middle and lower order: Kevin O’Brien missed with last two encounters, owing to a tight hamstring. If fit, he will walk in to the side and bat ahead of Andrew Balbirnie. Balbirnie played a handy knock (85 not out) to pave the way for an Irish victory in the previous clash. He may have to drop down at No. 6 to accommodate O’Brien. Gary Wilson will follow Balbirnie at 7.

Stuart Thompson made a quickfire 37 off 25 in the second ODI. He will be ready with the challenge of finishing off the innings at 8, if the need arises. The rest of the line-up will comprise of George Dockrell, Tim Murtagh and Peter Chase respectively.

Bowlers: Boyd Rankin has been ruled out of the entire tour. Ireland were expecting him to be fit for the remaining ODIs, but his absence will mean a litmus test for the inexperienced bowling attack. They did well in Ireland’s 6-wicket win, but will have to remain consistent going ahead as well. Chase and Murtagh will spearhead the pace attack along with Thompson and O’Brien. In the spin arsenal, Porterfield will resort to Stirling and Dockrell to curb the run flow in the middle overs. Andy McBrine is likely to be benched if Kevin gets a nod.

Ireland may have to change their winning combination if their star all-rounder, Kevin, is deemed fit. Otherwise, they may opt for the same XI as well. 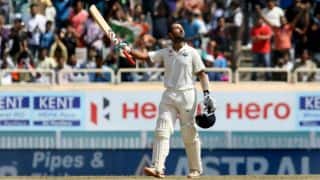