Nabi won both Man of the Match (MoM) and Series awards for his excellent all round performances throughout the tournament. This victory was a historic moment in Afghanistan s cricket history.

The final of the inaugural Desert T20 2017 Challenge was played between Afghanistan and Ireland at Dubai. The Afghans, led by Mohammad Nabi, bowled out Ireland for a mere 71. Nabi claimed 4 for 10, while Amir Hamza, Fareed Ahmad and Karim Janat got 2 each. Afghanistan chased down the target easily with the help of Mohammad Shahzad s blistering batting. Shahzad scored a belligerent 52 off 40 balls, while skipper Nawroz Mangal remained unbeaten at 17 and won the contest by 10 wickets. Mangal had earlier announced his retirement from international cricket but played this game as his farewell and led the side too.

Nabi won both Man of the Match (MoM) and Series awards for his excellent all round performances throughout the tournament. This victory was a historic moment in Afghanistan s cricket history. We present some interesting numbers from the match.

— Ireland s defeat was their 26th, 5th in UAE, 3rd at Dubai and 4th against Afghanistan.

— This was also Afghanistan s 8th consecutive win in T20Is the joint-most by any team. England and Ireland are the other teams to do this.

— Afghanistan s 10-wicket win was their biggest win in terms of wickets.

— Afghanistan also completed their chase with 73 balls remaining the most by them in a T20I.

— A total of 127 balls bowled in the entire match, the 2nd-least number of balls bowled in a T20I where no overs were reduced. The record still remains 93 balls in the match between Sri Lanka and Netherlands in World T20 2014.

— Afghanistan chased down the total in only 7.5 overs (47 balls), the 4th-fewest in history and 2nd least by an Associate Nation. Of course, this excludes rain-reduced matches.

— Shahzad also had 2 dismissals while wicketkeeping. This was the 3rd instance when Shahzad scored fifty and had 2 dismissals in a T20I. He became the 3rd wicketkeeper batsman to do so for three times after Kamran Akmal (4 times) and McCullum (thrice).

— Nabi also became the 3rd Afghan cricketer to receive the Man of the Series award in T20Is after Shahzad and Shenwari. This was also Nabi s 6th MoM award the 2nd-most by an Afghan player after Shahzad (10).

— 9 Irish batsmen were dismissed for single-digit scores. This is the joint 3rd-most (10 batsmen have been dismissed for less than 10 twice).

— Ireland were bowled out in only 13.2 overs (80 balls). This is the joint-3rd fewest in history, 2nd-fewest by an associate team and fewest against Afghanistan. 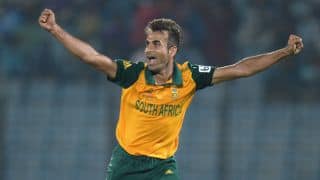 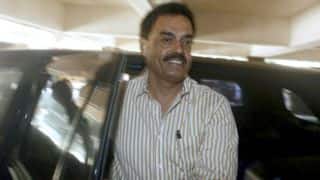