After breathing life in her comeback film English Vinglish as a Maharashtrian home- cum-laddoo maker, actress Sridevi is all set to launch a fresh initiative. The yesteryear actress will now launch a new course titled TOECL or Test of English as Cricketer s Language . 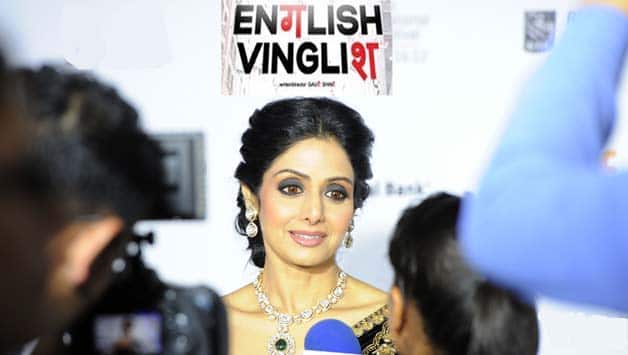 Sridevi announcing the launch of a new course titled TOECL or Test of English as Cricketer’s Language.

After breathing life in her comeback film English Vinglish as a Maharashtrian home- cum-laddoo maker, actress Sridevi is all set to launch a fresh initiative. The yesteryear actress will now launch a new course titled TOECL or “Test of English as Cricketer s Language”. Many cricketers, especially those from Pakistan, were demanding such a course to handle post-match presentation ceremonies, especially those questions asked by Ravi Shastri.

The actress has already held in-depth discussions with English Vinglish s director Gauri Shinde Sridevi s partner in this venture – and is all set to begin sessions in a month s time.

Unreal Times journalist and an ardent Sridevi fan, “Chalbaaz” Chandramohan caught up with the star, who was clad in her trademark classical cotton saree, on the sets err classrooms of the planned institute.

Chalbaaz Chandramohan (CC): Thanks a lot for talking to us, ma am.

Sridevi: Oh, the pleasure is mine.

CC: No, no, the pleasure is absolutely mine!

CC (red-faced): Er okay. (looks at his papers) To begin with, how did this idea come to you, ma am?

Sridevi: It was during the recently-concluded World T20 championship.

CC (incredulously): Wow! You are a cricket fan? You followed the T20 championships??

Sridevi (slaps his arm gently): Of course, not silly! I was in the kitchen making laddoos, when I heard Boney making loud, awful noises. I got really worried and ran into the hall to check if he s okay. He s quite old, you know.

Sridevi (continues): Turns out he was just guffawing loudly at the responses Umar Akmal was giving an interviewer. It was so insensitive, yaa. It reminded me of my role in English Vinglish. Poor Umar Akmal. Such a talented chap. And his brother too. Just because he speaks butler English and has teeth like Bugs Bunny, it doesn t mean people can make fun of him, right?

CC: But ma am, the Pakistanis are indeed funny. I remember in years bygone, Ravi Shastri was interviewing Inzamam-ul-Haq after the match. He said, “Congratulations, Inzy! Heard your wife is expecting? Inzi didn t understand the question and Inzi replied, “The boys played really well, though it was a tough wicket to play on. The boys didn t let me down.” It was so funny! You should have seen Ravi s face. Haha (holds his sides and guffaws)

Sridevi throws Chalbaaz a stern look of disapproval, at which Chalbaaz quickly pulls himself together and gets serious)

Sridevi (continuing): Anyway, that s when I decided to start TOECL. Cricketers visit a lot of countries, and unless it is Rohit Sharma, they d no doubt end up getting interviewed some point or the other.

CC: I see. Are you planning to seek the help of established English commentators?

CC: But ma am? I understand Mr. Shastri sticks to a script perennially, and obviously you would not want your students to tell their parents “All four results are possible” when they are asked about their exam scores. And what about Sidhu s linguistic proficiency? You should consider tapping into his expertise, especially with Mr. Sidhu now being invited to the coveted Big Boss reality show.

Sridevi: Thanks, but no thanks. I can t imagine my students speaking in incongruent, annoying analogies like “The ball went so high it would have got an airhostess with it” or “I am as confused as a child in topless bar”. Eww! (winces)

CC (nods sincerely): Makes sense, ma am. I totally understand. How about Gavaskar?

Sridevi: I would have thought about it. But even before the coaching classes could start he wanted a 65% opening discount for all Maharashtrian cricketers. Why does HE need a discount! I turned him down.

CC: I see. Have you had any registrations yet?

Sridevi: Yes! Skipper MS Dhoni has already expressed interested in learning opening lines other than “Well, of course”. Suresh Raina has also registered, although it may just as well be his nephew with some make-up assistance from Kamal Hassan. I have to check that out. Lasith Malinga, This..arr.. Per .err well, a few Sri Lankan cricketers have opted for a four-week crash course on listening and speaking skills. They said they won t be able to afford the fee as their Board is yet to pay them, but they offered to hold sessions on pronouncing Sri Lankan names with clarity and precision to a wider audience.

CC: That s wonderful, ma am. On behalf of The Unreal Times, we wish you all the very best.

(Hitler Swamy is an ex-drummer, co-founder of Rebelz theatre group and an occasional reader. Reproduced with permission from http://www.theunrealtimes.com/. The UnReal Times is one of the top websites for satire, spoof, parody and humour in India) 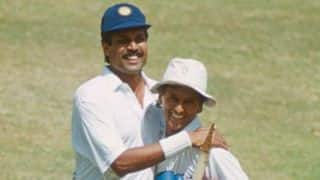