Watching India bat in recent ODI/ T20 matches has become a non-stop advertisement for tyre companies. Rohit Sharma comes out with his big shots and scores centuries almost every second match. If and when one of the openers fall, out walks Virat Kohli who keeps batting and batting and batting. In all matches one or both of them have batted more than 80% of the time.

Rohit Sharma wields a bat with a CEAT tyres sticker, while Kohli wields an MRF. Shikhar Dhawan has come to the party in the recent matches with another MRF bat. So it looks like wielding a bat with a tyre company sticker is the best bet for a smashing performance.

What has aided this are also the absolutely flat tracks. There is none of the old fashioned swing in the beginning and reverse swing in the end. The ball does not grip for spinners. From beginning to end, the pitch is flat and aids batting. More and more 350 plus scores are being delivered and in Mumbai, South Africa crossed 400.

National Highways Authority is looking at this with interest. The concerned minister Nitin Gadkari said, “We have been increasing public spending on highways. However, the message has not reached everyone. Road building is far less glamorous than shouting intolerance. So, what we want to do is to build the NHAI brand. Critics keep saying that the pitches have become roads in ODIs. So we thought that is an idea for sponsorship. Henceforth, NHAI will sign up as pitch sponsors for all ODIs and T20 matches.“

However, this sponsorship will not apply for the upcoming T20 World Cup, as it is felt that a slow, spinning track will help India go far in the tournament. Test matches are out of bounds for now. But, the Bangalore Metropolitan Authority (BBMP) is expected to bid for Test match pitch sponsorship as the crumbling tracks in India resemble Bangalore roads the most.

(Ramesh Soundararajan is a Bangalore based corporate executive, who is passionate about all things passive: Watching sports, reading books and attending meetings; Need to figure out, why the first two do not earn as much money as the third. The above article was Originally published in UnRealtimes) 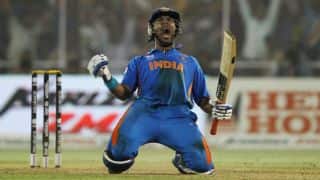