On August 13, 2011, India were pushed off the summit of the Test rankings by an inspired England side. Nishad Pai Vaidya goes back to the Edgbaston Test of 2011 where England took the No 1 spot in the Test rankings. 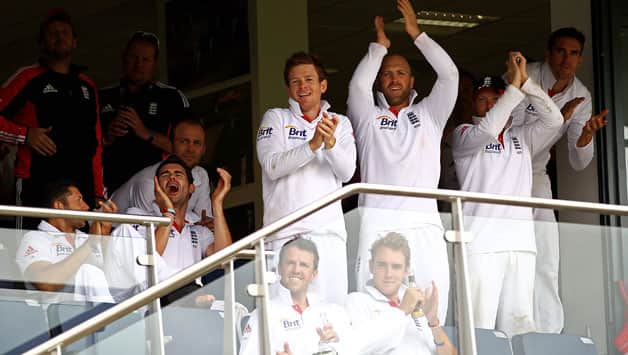 England won the third Test at Edgbaston by an innings and 242 runs to take a 3-0 lead in the four-match series, thereby, robbing India off their World No 1 Test ranking © Getty Images

On August 13, 2011, India were pushed off the summit of the Test rankings by an inspired England side. Nishad Pai Vaidya goes back to the Edgbaston Test of 2011 where England took the No 1 spot in the Test rankings.

Life had come a full circle for Mahendra Singh Dhoni in 2011. Having tasted World Cup glory in April, little did anyone know that Indian cricket was to slip to an unimaginable nadir in a matter of months. Riding high on the World Cup victory, India were humbled in Old Blighty when an inspired English side stole the number one spot in Test cricket and whitewashed them 4-0. While India were on a slippery slope right since they stepped on English soil, it was hardly surprising when they lost the crown on August 13, 2011 at Edgbaston.

Coming into the third Test at Edgbaston, India had almost lost their grip over the No 1 spot in the Test rankings as they lost the first two games by huge margins. On form, England were the clear favourites and looked good to continue that winning streak and push India off the summit. The critics were baying for Dhoni’s blood as the team looked a shadow of their dominant selves. With the exception of Rahul Dravid, the rest of the batsmen failed miserably. The bowling looked inept for a major part and failed to stem the flow of runs. The fielding: the less said the better.

In overcast conditions on Day One (August 10), England won the toss and put India in to bat. It was a very sensible decision given the way the England bowling had outsmarted the famed Indian batting in the previous two matches. The story was no different as India were bowled out for 224. Dhoni was the only one who fought with a belligerent 77.

The total was never enough as England batted for about two days. Alastair Cook was in sublime touch. Having failed in the first two Tests of the series, Cook was eyeing a good performance and backed his typical grit and hunger to essay a long innings. With tight defence coupled with the ability to split the gaps, he stroked his way from one milestone to another. Praveen Kumar was the only one who bowled tight lines. Whereas, Ishant Sharma, Shanthakumaran Sreesanth and Amit Mishra conceded over 150 runs each. The bowling card made a sorry and an embarrassing sight for the Indians. 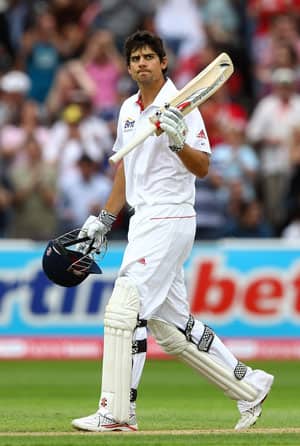 There was no respite for the bowlers as the England batsmen kept chipping in with cameos. Eoin Morgan was the other centurion in the innings; the misery kept piling on India. By the time Cook was out, England had amassed a mammoth 710 on the board. He fell only six runs short of what would have been a well deserved triple century. But, it was an innings of great patience and application. The months leading up to this game had seen Cook’s renaissance and this was where all his elements combined to script an epic. In total, he had batted for 773 minutes and had faced 545 balls for his 294. The lead of 486 was out of India’s reach from the outset.

India’s innings started late on Day Three (August 12) and they lost Virender Sehwag for a duck. It was Sehwag’s comeback game and he did return in forgettable fashion. He bagged a king pair, which only highlighted India’s woes on the tour. Dravid and Gautam Gambhir saw off the day and they finished on 35 for one.

When Day Four (August 13) commenced, India had a monumental task before them. Although Dravid was in good form, it was unfair to expect one man to shoulder the whole batting line-up. The pressure was too much and Gambhir and Dravid fell early to leave India at 40 for three. James Anderson was in his stride and snared four out of the top five.

Sachin Tendulkar had a quiet time during the tour amidst undying talks of his impending 100th international ton. Realising the need to break free, Tendulkar played his natural game and countered the English attack. Anything outside the off-stump was driven on the rise and dispatched to the boundary. At the other end, wickets kept tumbling as VVS Laxman edged one to Matt Prior. Suresh Raina had a miserable time against the short-stuff, but this time Graeme Swann’s spin got the better of him. Things only got worse when Dhoni’s bullet straight drive took Swann’s hand and shattered the stumps at the non-striker’s end. Tendulkar looked up the skies even before the umpire confirmed he was out.

At 89 for six, it was only a matter of time before England were to be crowned the new leaders of the Test rankings. Dhoni only fought to delay the inevitable. Amit Mishra and Praveen Kumar also offered some resistance. Praveen in particular was smashing it around. He was one of the few positives to emerge from the tour and the confidence of his bowling spilled into his batting. He hit some towering sixes to entertain the crowd and give the Indian crowds a few smiles. Dhoni too race along to his fifty and remained unbeaten on 74.

The big moment arrived when Sreesanth edged a Tim Bresnan delivery to Kevin Pietersen at gully. The England team celebrated with joy of fulfillment. For years, they had aspired to reclaim the spot, but had always stumbled upon hurdles. The Andrew Strauss-Andy Flower partnership heralded a new era where they backed their strengths and were positive in every aspect of the game.

Back in India, the team was criticized and hounded. It had been an ignominious ride in every sense as England literally robbed them. The World Cup holders were now shamed in the classical format and the blame games had begun — which only intensified in the following months.

Ashes 2013: Talking points of the 4th Test at Chester-le-Street