In the end, England were only one wicket away from winning the first Test against Sri Lanka.

Sri Lanka drew the first Test against England at Lord’s in one of the most nail-biting encounters in the history of cricket. With the ninth wicket falling in the final over, Nuwan Pradeep played out five balls from Stuart Broad to ensure Sri Lanka left Lord’s with their heads held high. On the previous evening, however, Alastair Cook had let Gary Ballance bat on, thereby delaying England’s declaration. Abhishek Mukherjee criticises a terribly defensive move that set English cricket back another step during this phase of doldrums.

Graeme Smith had no business declaring at the Sydney Cricket Ground (SCG) in 2005-06. However, with his side down 0-1 in the series, he had decided to go all out, and had set Australia 287 in 76 overs on the final day. Ricky Ponting and Matthew Hayden’s devastating partnership (182 in 200 balls) had sealed the Test for Australia.

Rahul Dravid had declared with Sachin Tendulkar on 194 not out; Sunil Gavaskar, with himself on 182; Michael Atherton, on Graeme Hick’s 98; Imran Khan, when Javed Miandad was on 280; all captains wanted their sides to win. They put their teams above personal triumphs, had taken some flak from the critics as a result, but were generally hailed for the decisions.

Alastair Cook did not. One can say the England went on the defensive after that burst from Sri Lanka‘s Shaminda Eranga and that excellent support from Rangana Herath that had left them reeling at 121 for six. What followed was an excellent rearguard action from Gary Ballance and Chris Jordan, and the Test was as good as saved.

Then the fun began. With 16 overs to go for stumps on Day Four, England were at 178 for six, a comfortable 300 runs ahead. Surprisingly, there were no instructions from Cook to get on with the score: it was as if he wanted Ballance to get his hundred, without any instruction to get things going.

It was almost excruciatingly agonising: with eight overs left in the day, Ballance played out a maiden over to Eranga. England led by 330. It was Broad who came to party [not Ballance], scoring a breezy 18-ball 24: of course, there was no question of a declaration, since Ballance was already on 90. So they played on, with nine coming off the next two overs.

By then there was no point in declaring, since the day’s play would have been over: Ballance brought up his hundred in the final over of the day [and England scored two off the last five balls]. Somewhere in this world, Hick, his fellow Zimbabwean-born Englishman, must have rued a certain Atherton declaration.

What did Cook gain out of batting on for that extra half-hour? He let Ballance reach a hundred [a sublime one, admittedly].

What did he lose out batting on for that extra half-hour? A victory!

It was an easy choice: a defensive approach has seldom won anyone Tests. Unfortunately, Cook, who could have sent a message to the critics with his decision, chose not to. It could have marked the beginning of an English comeback after the Ashes 2013-14 whitewash.

He simply thought Ballance’s hundred was more important. And paid the price! 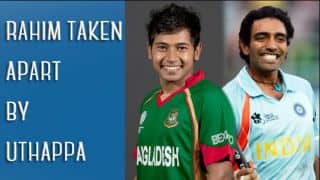