On March 28, 1951 Alex Moir became only the second cricketer in the history of Test cricket to bowl two consecutive overs in an innings.

On March 28, 1951 Alex Moir became only the second cricketer in the history of Test cricket to bowl two consecutive overs in an innings. Abhishek Mukherjee looks back at one of the oddest incidents ever to take place on a cricket field.

Warwick Armstrong had somehow bowled two consecutive overs on either side of a declaration: England had declared before the close of play on the first day, which was against the rules in 1921, and had to resume batting, at 1921 Old Trafford Test. Everyone had passed it as an umpiring error, and one that was not likely to be repeated. However, it took only thirty years for the ‘feat to be emulated once again against England.

New Zealand had succumbed to the strong English bowling attack for 125 in 70 eight-ball overs led by the leg-breaks of Doug Wright, who took 5 for 48. Alex Moir was the highest scorer with 26 not out, and not a single batsman looked in control.

The Kiwis fought back hard, having England at 69 for four at one stage. However, Len Hutton and captain Freddie Brown set up tent, and with Trevor Bailey, Godfrey Evans, and Alec Bedser all contributing, England ambled to 227, taking a significant lead of 102. Fen Cresswell and Tom Burtt took three wickets apiece.

Roy Tattersall picked up the first five New Zealand wickets with his off-breaks. It looked all over at 105 for 7, but Verdun Scott chiseled out a gutsy 60, and Moir contributed again, guiding New Zealand to 189, 87 runs ahead. Tattersall took 6 for 44 and Bailey 3 for 43.

England required only 88 for a victory in two hours. Though Reg Simpson was dismissed early, Hutton and Gilbert Parkhouse kept England firmly on track. Walter Hadlee persisted with his main bowlers, Cresswell and Burtt, and brought his leg-break bowler Moir back for the over before tea. England went to tea at 35 for 1, requiring 53 more in an hour-and-a-half.

After tea, as S Canynge Capel wrote in his The All-Blacks of Cricket, Moir bowled the first over ‘in the general excitement . None of Moir, the batsmen, Hadlee, or the umpires Jock McLellan and Melville Pengelly seemed to notice, and play got under way normally. England scampered to victory with 6 wickets in hand.

Despite the one-sided result, it was Moir s curious ‘double that has made the Wellington Test memorable, and still features regularly in cricket quizzes all round the world.

(Abhishek Mukherjee is a cricket historian and Senior Cricket Writer at CricketCountry. He generally looks upon life as a journey involving two components cricket and literature though not as disjoint elements. A passionate follower of the history of the sport with an insatiable appetite for trivia and anecdotes, he has also a steady love affair with the incredible assortment of numbers that cricket has to offer. He also thinks he can bowl decent leg-breaks in street cricket, and blogs at http://ovshake.blogspot.in. He can be followed on Facebook at http://www.facebook.com/ovshakeand on Twitter at http://www.twitter.com/ovshake42)

Origin and history of the Carmody Field 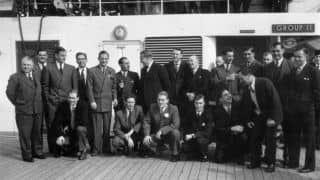 New Zealand bowled out for 26, lowest ever score in a Test innings