August 24, 1836. Handicapped by a severe injury, Alfred Mynn was not only as good as ruled out against North of England, but the doctors considered amputating his leg. However, the giant he was — in every sense of the word — he decided to come out to bat with a runner. What followed was one of the greatest innings England had seen. Abhishek Mukherjee looks at an astonishing display of endurance and the introduction of batting pads in cricket.

At 6’2” and 135 kg (he approached 150 as he grew in age, and hence, girth) in his heydays, Alfred Mynn was humongous. His philosophy was simple: “Beef and beer are the things to play cricket on.” He never cared much about his weight, for he lived in those innocent days when words like triglyceride were unknown to the world.

Coached by John Willes (who was called for bowling overarm at Lord’s in 1822), Mynn took to roundarm bowling. He was genuinely quick with the ball, terrorising batsmen across the country. Sporting Life (1861) wrote of Mynn’s bowling in his obituary: “Away shot the ball, as if propelled from a Whitworth gun, and, if straight, woe to the unlucky wicket opposite.”

“The speed at which Mynn bowled… and his life-size personality captured the imagination of the public in a way no cricketer had before,” wrote Simon Wilde in Number One: The World’s Best Batsmen and Bowlers. In his compilation of 100 greatest cricketers of all time, John Woodcock ranked him 4th.

Fred Gale wrote in Echoes from Old Cricket Fields: “I must see another man who stands six-foot two, of gigantic but symmetrical figure, standing up his full height, taking six stately steps to the wicket, and bringing his arm round well below the shoulder, and sending the ball down like a flash of lightning dead on the wicket, before I can ever believe there is or has been a greater cricketer than Alfred Mynn.”

From 213 First-Class matches Mynn captured 1,038 wickets at 10.22. A whopping 63% of these were bowled. In all cricket his numbers read 1,330 wickets at 9.31. He was hit the ball extremely hard, and his 4,955 runs came at 13.42, more than acceptable at the era. His all-round abilities made him invaluable, especially in single-wicket contests that were a common feature of the era.

They called him “The Lion of Kent,” but also played for Sussex, MCC, Gentlemen, South of England, and All-England Eleven (AEE). It would not be an exaggeration to call him the most iconic cricketer of cricket till WG Grace’s arrival.

Few, however, described Mynn as eloquently as William Jeffrey Prouse:

“With his tall and stately presence, with his nobly moulded form,
His broad hand was ever open, his brave heart was ever warm;
All were proud of him, all loved him. As the changing seasons pass,
As our champion lies a-sleeping underneath the Kentish grass,
Proudly, sadly will we name him — to forget him were a sin.
Lightly lie the turf upon thee, kind and manly Alfred Mynn!”

The match between North and South of England was typically an eagerly anticipated one. This one, played at Leicester, featured some of the champions of the era: South boasted of Mynn and the round-arm medium-pacer William Lillywhite; North, on the other hand, had Samuel Redgate (some said he was as fast as Mynn), and Fuller Pilch, the greatest batsman in the pre-Grace era.

One of the singular aspects of the match was the captains. Lord Frederick Beauclerk led South, while Benjamin Aislabie led North. Both men had come from London specifically for the match. However, there was a catch: they were non-playing captains who led their sides from the marquee that passed as the pavilion.

Just before the match started, a “Leicestershire professional” hit the ball; it struck Mynn on his ankle. It was a horrific blow. Most people would have refused to play, but Mynn being Mynn, decided to carry on. However, he was sent back to Anchor Inn, his swelling ankle bandaged.

Thankfully, Lord Beauclerk elected to bat, and though South lost four quick wickets (Redgate clean bowled the first three batsmen), Ned Wenman (30) and George Millyard (31) batted on gustily. South were 97 for 6 at stumps, but Mynn was not around to witness the action.

Two quick wickets fell next morning, and Mynn emerged with a runner, and scored an unbeaten 21; he was left stranded as South were bowled out for 165; Redgate finished with 5 wickets.

Thankfully, Lillywhite was in good form (he had 5 wickets as well, and bowled Pilch for a duck), and it seemed South could pull it off without Mynn, who, somewhat astonishingly, took field. With James Dearman (41) and Redgate (22) held fort after 7 wickets went down quickly.

Once Lillywhite and James Cobbett ran out of steam, Mynn and Millyard had to be summoned. Mynn (how could he bowl?) had Dearman caught by Thomas Beagley soon; Millyard bowled Redgate; and Mynn ran through Charles Creswell’s defence to finish things off.

David Frith wrote in The Fast Men: “Mynn’s leg, by the third day, had swollen alarmingly, and a normal being would have withdrawn from the match. But he limped out to bat at the fall of the third wicket and, in constant agony, hit the bowling all over the field.”

Redgate bowled fast, very fast, and hit Mynn several times — but the day belonged to Mynn. “That was Mr Mynn’s day, that was. It mattered not what length I bowled him — the better I bowled, the harder he hit me away,” Redgate later confessed. No bowler was spared as Mynn bludgeoned his way to 125 not out; South scored 314.

Lord Beauclerk greeted Mynn on his way back to the pavilion. When he eventually saw Mynn’s leg, he was horrified. Frith wrote: “A fearful sight met their eyes as Mynn removed his trousers. The leg, usually the size of Goliath’s, was grotesque from swelling and inflammation. It was unbelievable that a man could have stood on it, let alone batted — against Redgate — for five hours.”

Of course, Mynn had to be rushed to a London hospital. A stagecoach (for the uninitiated, a stagecoach is similar to a wagon drawn by horses, usually four) was summoned, but a new problem arose: the incredible frame of Mynn would not fit inside it due to the immobility of his injured leg; he could not sit.

What to do? The problem was eventually solved by placing the humongous frame on the roof of the stagecoach. The hundred-mile journey on terrible roads added to Mynn’s agony. He had to be admitted to Angel Tavern, St Martin’s Lane, London.

It was at Angel Tavern that Dr Bainbridge and Surgeon Lawrence briefly considered an amputation of leg. The deeply religious Mynn even asked for some time to say his prayers. As the story goes, it was during these prayers that they decided against the amputation and shifted to St Bartholomew’s (the oldest hospital in Europe) instead.

Five North batsmen crossed 20 during the near-impossible chase of 370, but none of them made it to 30. Filch, on his way to 28 (he was claimed by Lillywhite again), reached 2,000 First-Class runs. Bowling unchanged, Lillywhite claimed 6 wickets and Cobbett 4. North were skittled out for 151 and lost by a whopping 218 runs.

“Leg-guards”, as pads were originally called, were looked down at scornfully by the purists, Lord Beauclerk being one of them. As history goes, Nicholas Felix was probably the first person to use pads while batting, and Pilch often used it, but they were not commonly used.

At this age it made little sense: round-arm bowling, with the advantage of pace, was gaining popularity in England. In fact, Ashley Mallett mentioned in The Black Lords of Summer: The Story of the 1868 Aboriginal Tour of England that Mynn did not wear leg-guards for the match in question.

It was Mynn’s injury that apparently led to the popularity of pads in cricket. Batsmen used them more frequently, and they soon became an essential part of the batsman’s kit. Gale wrote in The Game of Cricket that Mynn gifted Grace one of his pads. Though it makes an excellent story of passing the baton, many doubt the anecdote.

– Mynn did not play again till 1838. On his return (for Kent against Sussex at Brighton) he failed with the bat, but claimed 5 wickets. By 1839 he was back to normal, beating all-England single-handedly at Town Mailing with 7 for 50 and 3 for 37 in Pilch’s benefit match.

– Unfortunately, Mynn often ran into poverty and got involved in match-fixing (as early as in 1842). 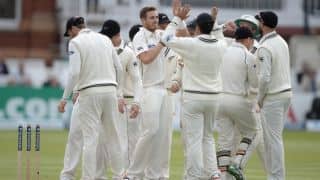