Funny movie dialogues and other connections of Amitabh Bachchan with cricket

Born October 11, 1942, Amitabh Bachchan has ruled Bollywood like none other. His fans have spread over strata across political, economic, religious, and social strata. Whether it was the Abhishek Mukherjee looks at the man BBC named Superstar of the Millennium.

It is difficult for the current generation to understand the impact Amitabh Bachchan had on India in the 1970s. Inflation, poverty, and unemployment left the country pass through a low she had seldom known since Independence. The common man, frustrated by the apparent futility of the lives cost for Independence, looked for a messiah.

There was no messiah, but there arrived two icons, in different avatars, in different fields, but both to instil hope in people: one, with the bat, who converted India from a team of individual brilliances to a unit; Kapil Dev may be the greatest all-rounder India has produced and Sachin Tendulkar the only one to compete for a place in an all-time World XI, but it had all started with Sunil Gavaskar. He had taught India to hope.

On the silver screen appeared the Angry Young Man who took the mantle of the Superstar from Rajesh Khanna. The nation wanted a reflection of their rage being satiated on screen: the tall man, with his rich baritone, reflected their anger on screen. They had found an icon, albeit imaginary, who actually inspired them. It was not a coincidence that the nation prayed for him following his near-fatal injury in the sets of Coolie.

Bachchan was more than an actor: he helped move a nation; he gave them something to look forward to in a state of hopelessness. The nation waited for a Gavaskar hundred the way she waited for the new Bachchan blockbuster to hit the theatres. It would be wrong to perceive them critically: there have been greater cricketers and actors, but few have moved an entire nation to the extent they have.

Here, then, is a list of cricket connections of the legend, who was himself an avid cricketer, took part in several matches involving actors, and remains a keen cricket follower:

[Note: I am deliberately leaving out the fact that he commentated during the India vs Pakistan match in ICC World Cup 2015.]

Filmfare started giving out Raj Kapoor Award for Lifetime Achievement (later the Filmfare Lifetime Achievement Award) in 1990; Bachchan was named the first recipient of the award (ahead of Lata Mangeshkar). No prizes for guessing who handed the award over to him: Gavaskar. As Bollywood historian Diptakirti Chaudhuri mentioned, The Little Master, always one for jokes, tried to tiptoe to equal the recipient’s frame…

A monologue from Namak Halaal (1982). No explanation required, barring the facts that:

a) Neither Vijay Merchant (then 18) nor Vijay Hazare (then 14) came anywhere close to playing cricket in Melbourne in 1929.

b) Both Wasim Raja and Wasim Bari played at Wankhede in 1979-80, but there was not a single run out in the Test.

Amar Akbar Anthony (1977) was yet another Manmohan Desai blockbuster that is usually scoffed at by critics (but loved by us: what would they understand of three long-lost brothers donating blood simultaneously to the mother they do not recognise?). The movie involved a rendezvous between Inspector Amar Khanna (Vinod Khanna) and Anthony Gonzalves (Bachchan) when the former came in pursuit of the gang-lord Robert (Jeevan) at the Anthony’s den. The following conversation ensued:

Though the great man is not seen playing, or even mentioning the sport in Kabhi Khushi Kabhi Gham, it perhaps has the most cricket references. The movie (almost) opens with a scene depicting Rohan Raichand (Hrithik Roshan) hitting a six off the last ball of the match to pull off a sensational victory, albeit to an extremely defensive field placement. Cricket keeps coming back in the movie with Rahul (Shahrukh Khan) and Rohan listening to audio commentary of an India-England encounter. Anjali Sharma (Kajol) is also seen celebrating an India victory.

5. At the Academy Awards

Lagaan (2001), the third Indian movie to make it to the Academy Awards shortlist (after Mother India and Salaam Bombay!), was based on a cricket match between Champaran Cantonment and the villagers of Champaran. Who else but Amitabh Bachchan as a background narrator for a magnum opus of that order?

Once again, a Diptakirti find: when Vijay (Amitabh Bachchan) tries to woo Asha (Katie Mirza) in Shaan in the absence of Sunita (Parveen Babi) he promises a married life with a son and a daughter. While the daughter was supposed to be a doctor, the son was expected to be a cricketer “like Sunil Gavaskar”…

This may be a far-fetched connection. Miss World 1994, held at Sun City, featured the usual elite panel of judges. Along with Amitabh Bachchan was a certain Fanie de Villiers, who, as per The Center Fresh Book of Cricket Lists, became a fan of the Indian legend after they got to know each other. 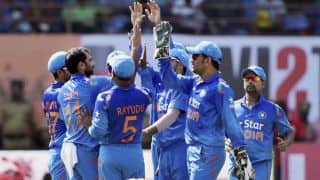