Amul came up with its quintessential witty yet hard-hitting take on the issue.

The second Twenty20 International (T20I) between India and South Arica at Cuttack ended in a disappointing way. Indian team’s shambolic performance resulted in a heavy loss. But what disappointed more was the crowd’s behaviour. The furious fans threw a barrage of bottle missiles on the ground, resulting in a stoppage. The game could begin only after the security personnel intervened. But by then, a lot was lost; including reputation. Crowd trouble suspends play at India-South Africa 2nd T20I at Cuttack: Twitter reactions

Crowd’s unruly behaviour was targeted towards Indian team’s poor display. It came under heavy criticism from all quarters. Some said that Cuttack should be banned from hosting games, and some said South Africa should pull out of the tour immediately on security grounds.  Pick of the tweets: India vs South Africa, 2nd T20I at Cuttack

Amidst all such calls, Amul came up with its quintessential witty yet hard-hitting take on the issue. The latest Amul topical, that came out after the Cuttack game, shows the Amul girl standing inside the stadium with Virat Kohli, with bottles raining in. The ad gives the message that though the crowd loves such notorious behaviour, it is uncalled-for and completely unacceptable. 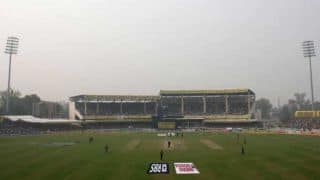