Till the second Test of the ongoing series between Sri Lanka and India, it was all about Kumar Sangakkara and his farewell. But third looks quite heated after few words exchange between Indian spearhead Ishant Sharma and Sri Lankan pacer Dhammikka Prasad while India’s second innings batting. [Also Read: Twitter reactions: Virat Kohli wins his first series as Test captain]

The whole show began when Ishant ducked to a bouncer from Prasad on day four. It was a no-ball as it was the third bouncer of the over. Probably Prasad was seeking a revenge as it was Ishant who had injured him on the third day. Prasad was angered by Sharma’s smiling face. At the same moment there was little more spice to come as both Ishant and Prasad came up to their face with Dinesh Chandimal and Ravichandrean Ashwin also joining the act. Finally the umpires came and trying to calm things down.

Later it was announced that along with Ishant, Sri Lankan cricketers Chandimal, Lahiru Thirimanne and Prasad were charged of misconduct by ICC.

Just after a day of the incident, Amul came up with a caricature advising Sharma to calm down with the headline, “SHANT, SHARMA, SHANT!” Taking a dig at Prasad, the copy also said, “Amul, Dhammakidaar Maska!” 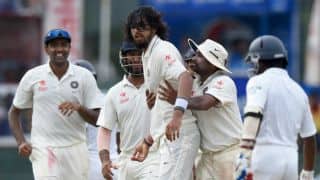