Composing one from the cricketers sharing last names with famous scientists, Arunabha Sengupta stumbles across a magnificent fast bowling unit.

From the shiny and rough surfaces dictating the swing of the ball to the magnus effect used by the spinners, from the technology of the Hotspot to the exponential decay function of Duckworth-Lewis, cricket mingles with science in every aspect. Like any other sport, only even more so.

And when people like us speak about the connections between cricket and science there can be only one way forward. As compulsive armchair selectors specialising in the oddest sorts of fantasy teams, there can be no second option than to make an All-Time XI where the cricketers share their names with famed scientists.

However, unlike the other XIs that we have formed in the past, this one requires some additional thought.

We have to make our definitions rigorous. Perhaps especially because this deals with the names of respected scientists, it implies that definitions need to be rigorous.

In the domain of science there have been thousands of names. There are millions of patents, research papers and prizes. There are topics, subtopics, specialisations. Actually, if we are sufficiently lax in our criteria, every cricketer who ever played First-Class cricket will be found to share his name with one or more men of science.

So, we have to make the domain of scientists very specific. So, while not really dealing with exactly household names, we have gone for names which are relatively commonly known.

For this purpose we have used the excellent volume called A Little History of Science by William Bynum, published in 2012 by the Yale University Press. It covers almost the entire history of the branches of science from the Babylonians till the CERN announcement of Higgs Boson in 2012.

We have considered all the scientists from across every diverse scientific field who find their names listed in this volume. Please bear in mind that since the book serves as an introduction to every branch of science is covered here, some excellent contributor to a very specific branch of mathematics or medicine or nuclear physics etc. may have been ignored.

The other factor to consider is that we are looking at the intersections between the names of scientists and cricketers. Thus, this is neither the best possible cricketing eleven, nor have the best eleven scientists been chosen.

So we begin with the openers.

At the top of the order will be Shane Watson. James Watson had been initially interested in ornithology, but later he teamed up with Francis Crick and became one of the most famous double-acts in science as they showed that DNA was made of two twisted strands.

Partnering Watson at the top will not be Crick, but the New Zealander Ken Rutherford. In the late 1800s, at the Cavendish Laboratories in Cambridge, another New Zealander, Ernest Rutherford, started his work on uranium and radioactivity. Later at the Victoria University of Manchester, he proved alpha radiation in the helium nucleus. He went on to be known as the father of nuclear physics.

There were better candidates for the opening positions, in Bill Brown and Graeme Smith. But the constraining factors, as we shall see later, have forced us to use those illustrious scientific surnames to fill other roles in the team.

In 1945, the Scotsman Alexander Fleming received the Nobel Prize for the discovery of penicillin, the first antibiotic drug. He shared it with Australia s Howard Florey and the German refugee Ernst Chain. Hence, at No 3, the man to come in is Stephen Fleming.

Our No. 4 is also a left-hander, and one of the bigger names in the team. In the early days of the seventeenth century, William Harvey made path-breaking discoveries about our blood circulation. And hence the next man in our side is the Australian southpaw Neil Harvey.

In the 1830s, an English botanist named Robert Brown argued that every cell has a nucleus at the centre, which is darker than the surrounding substance. He had obviously looked at a lot of cells under his microscope. We had three major options related to Brown. Bill Brown of Australia was a candidate for the opener s slot. England s David Brown was a more than decent fast medium bowler in the late 1960s. However, we decided to consider the lack of serious spinners in the line-up and went forward with the leg-spinning all-rounder and former England captain Freddie Brown.

In the eighteenth century, American patriot Benjamin Franklin was a popular man. Not only did he help write the Declaration of Independence, he also coined the everyday phrases like, Time is money and Nothing can be said to be certain except death and taxes. He was also a major inventor, who came up with the earliest forms of the rocking chair, bifocals, and while in France he performed his famous experiment with lightning that paved the way for electricity. The next man in our team shares his name with this extraordinary man, and he is James Franklin of New Zealand, who could bat well enough to score a Test hundred and was more than decent with the ball as well.

In the early nineteenth century, English geologist William Smith helped build Britain s canals, measuring many miles of land and deciding the best possible route for new canals. Thereby, he gradually ended up creating the first geological map of England and Wales. He also discovered that the most important characteristic of a layer of the earth s crust was not simply the kind of rock it contained, but also the fossils that could be found within it.

Hence, our keeper is his cricketing namesake Ian Smith. Of course, wicketkeepers sometimes tend to be a real pain when we create these All-Time XIs. Since there was no other choice of the stumper, we had to keep Graeme and Robin Smith out of our team.

The bowling attack is, however, a fascinating one.

First, we have Harry Boyle, the famous Australian partner of Fred Spofforth. Robert Boyle, the man who gave his name to the famous law of pressure and volume of gases, needs no introduction.

He is followed up by three fantastic fast bowlers, which gives the scientific team a phenomenal and intimidating attack.

Jeff Thomson comes in as he is mapped to JJ Thomson of Cambridge, the man who found the electron in atoms and did the groundwork for Rutherford to conduct his early experiments.

Frank Tyson sprints in, because of his namesake Edward Tyson. In 1699, this English anatomist was the first one to dissect the body of a dead chimpanzee and compare it with what he knew of human anatomy.

And finally, we have a man who is the only one to share his entire name with the scientist he is obliged to for his place in the side. John Snow was a fast bowling poet and one of the best ever for England (well fast bowler, not poet). And John Snow, the London doctor, brilliantly deduced the mechanism and spread of cholera from the 1848 to 1854. 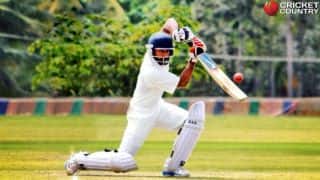 India A 6 down; South Africa A dominate with 255-run lead in unofficial Test