Ronchi was given an opportunity as their Test wicketkeeper BJ Watling suffered a knee injury in the first Test and was likely to miss out the Headingley Test.

Luke Ronchi announced his arrival in Test cricket, playing a fantastic knock on his Test debut against England in the recently ended Test serie. His role was amongst the reasons the Black Caps beat England to level the Test series. Suraj Choudhari writes why New Zealand cricket should make better use of the wicketkeeper-batsman.

Luke Ronchi is one of those rare cricketers who have featured for two full ICC member nations: Australia and New Zealand. He was born in New Zealand and brought up mostly in Australia. He first featured for Australia and made his international debut in June 2008 in a Twenty20 (T20) against West Indies. Later, he then shifted to his birth country and played for New Zealand. After a few successful years in limited-overs cricket, he finally got his Test cap at Headingley.

Ronchi was given an opportunity as their Test wicketkeeper BJ Watling suffered a knee injury in the first Test and was likely to miss out the Headingley Test. Further Watling was retained as a batsman and the assignment to keep wickets was allotted to Ronchi. New Zealand could have opted for an extra bowler since the onus was on them to square the series, but playing Ronchi proved just as aggressive a move. Brendon McCullum on the other hand has dared to experiment and have led the team successfully since he overtook as the captain of the Kiwis. Like before, even this move paid off as Ronchi grabbed the golden opportunity with both the hands.

Ronchi’s technique is based on the sound virtues of timing and is an aggressive hitter of the cricket ball. Having played 84 First-class matches, Ronchi has amassed 4615 runs at a healthy average of just over 38. He also has 13 career defining First-Class centuries to his name but and has made a seamless transition into the Test side.

In his maiden Test, he played quite a dauntless innings when he came into bat at number seven and smashed a quick fire 88 off 70 deliveries. In fact, if it wasn’t for his knock, New Zealand may have lost the Test. He came into bat when New Zealand had crashed down at 144 for five inside 31 overs and had to confront the formidable English attack who looked in great rhythm. But he stuck to his guns and got the ball rolling from the outset at Headingley and thus gave a testament to his self belief. His scintillating innings of 88 contained 13 boundaries and three sixes. He not only negotiated but transferred the pressure back on to England, scoring quick enough to allow New Zealand bowlers enough time to bowl out England twice in spite of rain disrupting the play on Friday.

Eventually, New Zealand posted a decent total of 350 and gave their bowlers a fighting chance and eventually went on to win the Test. Although BJ Watling walked away with the man-of-the-match award for his brilliant second innings hundred, Ronchi scored a quick 31 in the second innings too. A debutant is always under the pump and to have done that in his debut Test shows Ronchi perfectly fits into the aggressive Kiwi mould.

Ronchi at 34 may not be a spring chicken and his days at the top level maybe limited but he is a special player and New Zealand should look to make the best use of him. Also Watling’s success with the bat has made him a strong candidate for regular no.6. Ronchi’s First-Class strike rate of almost 86 is an indicator that he knows to sway the blade one way. While strike rate isn’t the most important factor in the longer format, however it helps a lot when a player gives you runs at a brisk pace, giving bowlers enough time for those 20 wickets. Ronchi just did that in his debut Test and the likes of Virender Sehwag, Adam Gilchrist and David Warner have done the same successfully over the years. It’s too early to bracket Ronchi with those names but surely he has the potential to excel in all conditions and one of the biggest challenges for him at Headingley was to negotiate the moving ball on a pitch that was holding up a little, he excelled at that. And not to forget his effectiveness behind the stumps.

Ronchi has been in brilliant form in the last few years. In One-Day Internationals (ODIs), his strike rate is over 123. It’s pretty close to that of the dangerous Glenn Maxwell who strikes at just over 126. So imagine Ronchi’s prowess. On Saturday, in a tour List A game against Leicestershire, Ronchi did no harm to his reputation as he smashed an unbeaten 106 from 76 deliveries, sharing an unbeaten 221-runs stand with New Zealand’s World Cup hero Grant Elliott. His knock took New Zealand to a massive 373 in 50 overs.

Ronchi is another lethal weapon in the aggressive McCullum’s ammunition cabinet and New Zealand should look to make full use of his form as they head to the tough tours of South Africa and Australia ahead.

Does Indian bowling attack have enough ammunition to dismantle Bangladesh? 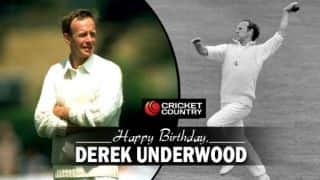