Team of eleven of cricketers of Asian origin. 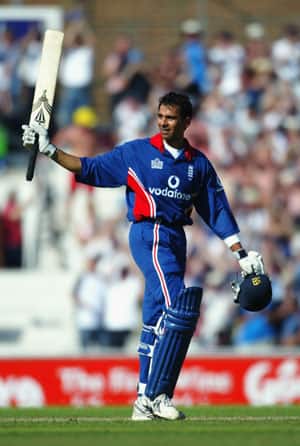 Indian-born Solanki may have 51 ODI caps, but the selectors never seemed to fully trust this silky strokemaker and quite brilliant fielder © Getty Images

The successors to Ranjitsinhji and Duleepsinhji and the contemporaries of Nasser Hussain have for the most part not been dealt a good hand by the England selectors.

Monty Panesar was given plenty of opportunities before being usurped by Graeme Swann.

Here is a team of eleven of cricketers of Asian origin who have fallen by the wayside over the last decade or so. Some have been tried, found not to be good enough and discarded. Others have not helped themselves at times, like the talented but unfit Samit Patel, but perhaps some could have been handled better by the selectors:

1. Vikram Solanki (Captain) – Indian-born Solanki may have 51 ODI caps, but the selectors never seemed to fully trust this silky strokemaker and quite brilliant fielder. His 13 match streak in 2003, including a sparkling century against South Africa, was his longest consecutive stint in the side. Never got a Test opportunity, but perhaps should have.

2. Owais Shah – Finally nailed down a regular spot in the ODI side in 2007 after being jettisoned after 15 matches earlier in the decade. In his second coming, Shah averaged 35 in 53 matches and seemed set to be a fixture in the side for some time to come after a brilliant 98 against South Africa in the Champions Trophy of 2009. But question marks about his fielding, running between the wickets and propensity to be overwhelmed by nerves did for him in the end. All these failings were on show in his short six game Test career, which fell away after a promising 88 and 38 on debut against India.

3. Mark Ramprakash – The most talented English batsman of his generation fell foul of his own failings, but also those of the selectors who dropped him more times than Kamran Akmal let Mike Hussey off the hook in the Sydney Test of 2010. Ramprakash played his last Test in 2002 at the age of 32, but despite his astonishing consistency and mountain of runs for Surrey since, the selectors have resisted the temptation to recall him one more time.

4. Aftab Habib – A surprise pick during the 1999 home series with New Zealand, which England lost to slide to the bottom of the Test rankings, Habib was here today and gone tomorrow with just 26 runs in his three innings and falls into the category of those that weren’t good enough.

5. Usman Afzaal – One who fell victim to the selectors’ aversion to those of a more portly nature. Afzaal admittedly didn’t set the world alight with just 83 runs in three Tests during the 2001 Ashes series, although he did score a classy fifty at The Oval. He didn’t impress in other ways too. The Aussies were nonplussed by his cockiness and the flashy sponsored car that he rocked up in for his debut.

6. Ravi Bopara – To be frank, it is amazing that Luke Wright is ahead in the pecking order, but the immensely-talented Bopara has become used to life on the fringes since bombing in the 2009 Ashes series. Three successive hundreds against the West Indies convinced the selectors that Bopara was the man to bat at three against Australia, when it was obvious that five or six were more suited to him. In one day cricket, he can fill a multitude of roles as an opener, late order hitter, useful bowler and electric fielder. He may get a second coming in Tests, thanks to Paul Collingwood’s retirement.

7. Samit Patel – Patel did well in his 11 ODI in 2008 and in our view is a better bowler and batsman than both Tredwell and Yardy. However, Patel has fallen foul of England’s dislike of lardy cricketers and to be fair given that he reportedly failed a fitness test before the final XV for the World Cup was chosen, he only has himself to blame. That said, maybe it is better to have someone in the side that eats pies, rather than bowls them.

8. Adil Rashid – Nothing excites selectors and fans alike as a world-class leg-spinner, and Rashid has the potential to be just that. Selected for the 2009 World T20, Rashid did reasonably well. Since then, though, he has been messed about – most famously when withdrawn after one expensive over in Alastair Cook’s farcical debut as captain in a T20 match against South Africa in 2009. Suddenly the England hierarchy lost faith and James Tredwell leapfrogged Rashid for the tour of Bangladesh – surely the ideal place to blood the young leg spinner. Time is on Rashid’s side however, as he is still only 22.

9. Kabir Ali – It is perplexing that Kabir wasn’t given more than the solitary Test after taken five wickets on debut against South Africa at Headingley in 2003. He also performed reasonably well in his 14 ODI, taking 20 wickets at a shade over 34. However, his economy rate was over six runs per over and the final straw came when he was smashed for 72 off just six overs by Sanath Jayasuriya and Tharanga in 2006.

10. Sajid Mahmood – He may be quick, but despite being a cousin of boxer Amir Khan, Mahmood invariably lacks the killer punch and can make James Harmison and Mitchell Johnson look accurate – such is his waywardness at times. Like many on this list, however, Mahmood was mistreated by the selectors. After impressing against Sri Lanka and Pakistan in the summer of 2006, he was promptly dropped for the Ashes series opener at Brisbane. When he was finally picked both form and confidence had gone and so was Mahmood just two tests later. He did make a brief limited overs comeback in South Africa in 2009, but his performances lacked the promise of his initial foray into international cricket.

11. Amjad Khan – Another of England’s one cap wonders, the Danish- born Amjad played his only Test at Port-of-Spain in 2009 and took 1 for 122. A subsequent knee injury and loss of form means that others have leapfrogged him in the pecking order and barring a minor miracle, is unlikely to play for his adopted country again.