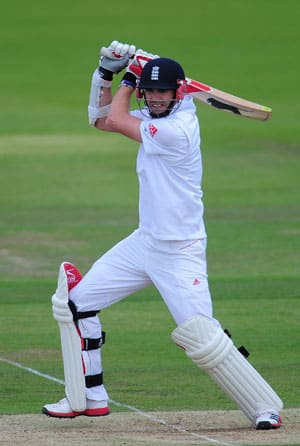 There is something about this Indian bowling attack that makes me back the batsman in me, James Anderson says © Getty Images

Jimmy Anderson, who missed a golden opportunity to score a century in each innings against India in the recently-concluded Test Match at Trent Bridge, has lashed out at team mate Graeme Swann for his inability to support his quest for a rare but – in Anderson’s own words – achievable feat; particularly against this Indian bowling attack.

For the record, no player in Test history has taken five wickets in a match and scored a century in each innings of the same Test. Even Gary Sobers, Ian Botham and Jacques Kallis have never came close. But Anderson believes this India-England series was the best chance for him to score a couple of Test centuries and be counted as one of England‘s greatest all-rounders.

“There is something about this Indian bowling attack that makes me back the batsman in me. It’s not like these guys are Mpofu, Utseya or Roubel Hossain….” said Anderson, neither with a twinkle in his eye nor his tongue anywhere near his cheek.

In both innings of the recently-concluded Trent Bridge Test, Swann was unable to withstand the hostile Indian attack and fell while his partner felt he was nearing centuries in both innings.

“I was just 94 short in the first innings and 99 in the second. You’d expect someone like Swanny, who’s played a decent amount of cricket, to hold off the Indian attack for a few overs. I told him, I just need an hour in both innings, but I guess it was too much of an ask for him.”

“Look, I do not want to cook up a storm here, but I know Anil Kumble is considered by many as India’s best spinner of all time, but at times he bowled too fast. He never learned to slow the pace on his deliveries the way Praveen has so early in his career. I think he will beat Murali’s record, because unlike Murali, he knows how to turn a new ball, fair and square.”

Anderson also revealed something that Andrew Strauss might be livid with. Apparently it is England’s game plan, according to Anderson, to make Praveen look better than he really is. Praveen’s pace means that India are never able to complete their overs in time.

“It’s surprising how no one has realized that with Praveen in your side, no captain can get his side to bowl more than 12 overs in an hour. Praveen’s fastest deliveries are something like 56 mph and they have to travel 22 yards roughly. Say he bowls 30% of the overs every day, you do the math. I t just takes longer for him to finish his overs. As a batting team we have learned to use the bowler’s pace to our advantage.”

Ian Bell controversy: What transpired in the Indian dressing room during tea break