Caribbean all-rounder Andre Russell used a black bat in a match of Big Bash League 2016-17. Meanwhile, we present a list of 5 instances where bats became the centre of controversy in the game.

In any sport, equipments used in the game have always been a part of controversy at some point. In cricket, bats and balls have been always the part of such thing. On many occasions, bowlers tamper balls in order to get extra swing but with the bat, there have not been not enough such instances when they have become a part of controversies. Recently, Caribbean all-rounder Andre Russell used a black bat in a match of Big Bash League 2016-17, which landed him to a controversy. The reason is yet to be known for Russell’s usage of such bat. Meanwhile, we present a list of 5 instances where bats became the centre of controversy in the game.

This was the first such controversial instance involving a cricket bat. Even before international cricket was introduced, a shocking incident brought the changes in laws of width of cricket bats. Thomas White, while playing for Chersey on September 25, 1771 against Hambleton, used such a wide bat that almost covered the stumps. The Hambleton players protested against this, which was started by their opening bowler Thomas Brett. Captain Richard Nyren, leading bowler and batsman John Small of Hambleton signed a petition, which led to change in the laws Cricket wherein the maximum width of the bat was set at four-and-a-quarter inches.

Dennis Lillee walks out to bat with an aluminium bat!

On December 15, 1979, Australian pacer Dennis Lillee made his way to the crease with an aluminium bat. It was the first Test of the Ashes series at Perth, where Lillee walked out to bat when Australia when in trouble at 219 for 7 on Day One. Lillee remained unbeaten at 11 until the end of day’s play but on the next morning, he resumed his innings with a bat made of aluminium.

He had batted with the same piece in the previous Test against West Indies at Brisbane, but the oppositions found it amusing, something English captain Mike Brearley did not.

Lillee wanted to distort the shape of the ball.

The actual episode began on the fourth ball of the second day, when Lillee played a straight drive of Ian Botham with a metallic noise coming out of it. Australian skipper Greg Chappell thought that it should have resulted a boundary, which it did not and blamed the metal bat of Lillee. Chappell immediately sent Rodney Hogg (12th man) with two conventional bats for Lillee. Beside all this, Brearley was complaining about this to the on field umpires Max O’Connell and Don Weser as the bat was damaging the ball.

Hogg was sent back with the bats by Lillee. The episode continued for another 10 minutes more as Chappell entered the pavilion, took a bat off Hogg and marched towards Lillee. Further, Lillee threw his metal bat away in disgust and soon the match resumed.

In the year 2005, Ricky Ponting‘s bat came under scanner for strengthening it by a thin strip of carbon graphite in the back of the bat. The MCC showed their concern to ICC over this issue and felt this as an unfair power advantage was being given to the batsman.

A year later, after all the reviews, the MCC deemed it illegal and stated that the Kookaburra Kahuna used by Ponting, and two other Kookaburra bats bearing brightly coloured graphite strips down the back of the blade, the Beast and the Genesis Hurricane, contravened laws on bat enhancements.

With the same bat, Ponting hit a double ton against Pakistan at Sydney during the third Test in 2004-05.

The charismatic Caribbean batsman Chris Gayle used a golden coloured bat, which was quoted as his ‘Golden Bat’. There was rumour of metal being used in Gayle’s bat. Beside the rumour, the bat was quite heavy as well and was more than three pounds. Later, Spartan boss Kunal Sharma cleared everything by saying, “There is no metal in the gold colouring we are using in the bat. There are restrictions on what you can and cannot use in cricket bats. And you can t put metals into bat products because they can enhance stroke play. This bat is fine because we have not changed the make-up of it. We have infused a gold colour in the timber wood of the bat and there is sheen of a gold spray over the bat. There is a light spray of a beautiful gold colour over the bat, it is something that cricket hasn t seen before.”

I was gonna wait until #CPL but Tonight Guyana will be the 1st in the Caribbean to witness me using my GOLD BAT so don’t miss it, I’m playing only as a batter. If anyone in the world want to own a Gold Bat just visit www.spartancricketclub.com and see details. #GoldSpartan #TheBoss #333 #SixMachine

West Indies star all-rounder Russell used a black bat during the initial stage of Big Bash League (BBL) of 2016-17. The Sydney Thunder star used the bat with a black blade and pink handle in the opening BBL match against the Sydney Sixers after Cricket Australia initially gave the go ahead. But on the next day, it was banned because its colour marks the ball. 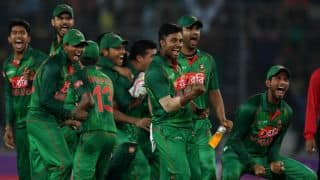 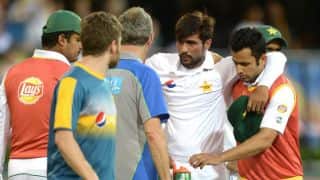