Andrew James Hall is a former South African cricketer, who could win games with both bat and ball.

Andrew James Hall, born July 31, 1975, is a former South African cricketer, who could win games with both bat and ball. He survived two threatening encounters and still went on to represent his country in 21 Tests, 88 One-Day Internationals (ODIs) and two Twenty20 Internationals (T20Is). Suvajit Mustafi looks at 12 things about the Proteas cricketer who retired from international cricket at the age of 31.

1. Encounter with death I: In 1999, Hall was shot six times at point- blank range when he finished his cash transaction in an ATM and turned back. One hit his left hand and the other brushed his right cheek and left gunpowder burns and shrapnel in his eyes and middle finger. Recalling the horrors in The Guardian, Hall wrote, I fell to the ground. They emptied my pockets, took my car keys and drove away. As soon as I began to move, they returned, and shone the headlights on me for a moment before turning around and driving off. Perhaps they returned to see if I was still alive . He was in hospital for three days and was worried if he could ever play cricket. But such was his determination that he was back playing in two weeks.

2. Encounter with death II: In January 2002, when Hall was an established member of the South African side, another incident occurred. He was a victim of car-jacking. Two guys wanted to buy his car and they wanted it for a test drive. Hall said no and one of them pulled out a gun and made him sit in the car. Mentioning the incident, Hall wrote: The worst thing was being driven around for 45 minutes with a gun to my head. But they kept saying: Look, we just want the car; there’s no need to be a hero. Just relax and it will be over soon. So I concentrated on trying to keep them, and myself, as calm as possible. They finally let him go.

3. Thoughts of migrating to Australia: Devastated by the mentioned incidents, Hall and his wife Leanie considered immigrating to Australia. He had planned to play there and qualify for Australia by the 2007 World Cup. It was a tough decision. But he changed his mind and later played Tests for South Africa.

4. SA s bowling star in 2007 World Cup: South Africa lost to Australia in the semi-final of the World Cup 2007. Hall was one of the architects who helped his side reach the penultimate stage. He picked up 14-wickets in the tournament at an impressive average of 23.92. He picked five for 18 against England in a Super Eight game. However with the bat, all he managed was 28 runs in the tournament.

5. Benefitting from the match-fixing scandal in 2000: Herschelle Gibbs alleged involvement in the match-fixing scandal kept him out from the national side. It opened the door for Hall, who began to open the innings with Gary Kirsten in One-Day Internationals (ODIs. In what was his second ODI as an opener, he scored a fighting 81 against a quality Sri Lankan spin attack, led by Muttiah Muralitharan, at Galle. Though he ended on the losing side, he had made a strong case for himself.

6. Hero of the 2000 tied ODI against Australia: In August 2000, South Africa toured Australia to play a three-ODI series in Melbourne s indoor Docklands Stadium. A year back, both the sides were involved in a dramatic tie in the World Cup 1999 semi-final and the second ODI now saw a repeat of that. Australia were cruising for a comfortable win, but during the end stages Hall turned it around. Coming to bowl in the 45th over, Hall bowled three overs for eight runs and got the wickets of Steve Waugh and Michael Bevan. The match which Australia would have won comfortable ended in a tie. Hall, who had also scored 37 earlier, was awarded the man-of-the-match.

7. Greatest last-over in ODIs? In a tri-series match at Adelaide in 2006, Hall probably bowled one of the best last over ever seen in ODI cricket. Sri Lanka needed 11 to win from last over and had two wickets in hand. Tillakaratne Dilshan, batting on 82, was joined by Muralitharan. South African skipper Graeme Smith entrusted Hall with the job and he responded with a maiden over! Murali played two dot balls and managed a leg-bye. With 10 needed from three and Dilshan on strike, the target was still on, but Hall bowled three dots to the Sri Lankan dasher. South Africa won by nine runs.

8. Record stand with Justin Kemp:In November 2006, India had reduced South Africa to 136 for seven in the 36th over. Hall and Justin Kemp added 138-runs from only 97-balls for the eighth wicket to help South Africa win the match. Kemp scored an unbeaten hundred while Hall was not out on 56 from 47-balls. The stand remains the highest stand for eighth wicket in ODI history.

9. Hall s 163 in Kanpur Test: Hall s Test career started with a fighting 70 against Australia in Kanpur and over the years went on to play several crucial knocks for his side. He will be best remembered for his 163 against India in the 2004 Kanpur Test where he played the Indian spinners Anil Kumble, Harbhajan Singh and Murali Kartik with ease. It was his only Test hundred. He ended his Test career with a batting average of 26.20 and bowling average of 35.93. He was much more successful in the shorter format and First-Class cricket.

11. English County Cricket and ICL: Hall has been a successful in English County Cricket. He has played for Worcestershire, Kent and Northamptonshire with his last First-Class appearance coming in 2014. He has also played in the Indian Cricket League (ICL) and appeared for Chandigarh Lions.

12. A devout and charitable Christian: Hall believes that his faith in Christianity has helped him a lot. In his column for The Guardian in 2003, Hall revealed that he runs his own organisation called HEAR along with former cricketer Fannie de Villiers. They help challenged kids receive implant that allow them to hear. 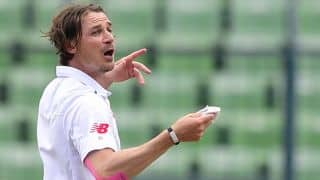