Mathieson conceded 40 from his next 23 balls in the match without picking up any further wicket.

In the fifth One-Day International (ODI) between England and New Zealand at Chester-le-Street, Andrew Mathieson became the second New Zealand bowler to take a wicket off his very first delivery in ODIs. Bharath Seervi lists players who took a wicket on their first ball in ODIs and how far they excelled in bowling in their career. READ: ENG vs NZ ODI series — A series breaking all batting records

A wicket on the very first ball of career is always a remarkable feat for any player, and Andrew Mathieson did exactly the same for New Zealand against England in the final ODI at Chester-le-Street, Durham on June 20, 2015. It was Mathieson’s first ball in international cricket. Unfortunately, that was the all he could do for his side.

The only other New Zealander to take a wicket on his first ball in ODIs was Shane Thomson against India at Dunedin on March 1, 1990. Overall Andrew Mathieson is the 20th to player to have the honour of picking up a wicket on ODI career’s first delivery. The last to do this before Mathieson was Kenneth Kamyuka of Canada against Netherlands in 2013.

The table below lists all the 20 players who have got this feat along with the batsmen whom they dismissed. READ: England vs New Zealand, 1st ODI: Records galore

The bowlers highlighted in bold are part-timers.

–          Everton Matambanadzo and Bhuvneshwar Kumar picked wickets on the first ball of their team’s innings.

–          Fidel Edwards had the best figures in the match among the above players — 6 for 22, still the best bowling figures for anyone on ODI debut. He is the only player to take six wickets on ODI debut.

–          Shaminda Eranga is the only bowler to take a wicket in his first over in Tests, ODIs and T20Is. He picked up a wicket on his first ball in Tests.

–          Bhuvneshwar’s first wicket in each of three formats were bowled. He is the only player to achieve this. 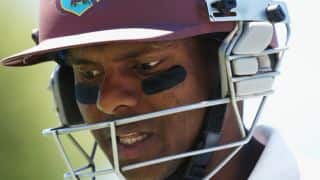