Born on March 2, 1977, Andrew Strauss will always be remembered as one of the most successful English captains to have ever played the game. Jaideep Vaidya goes through the life of a true leader in every sense of the world. 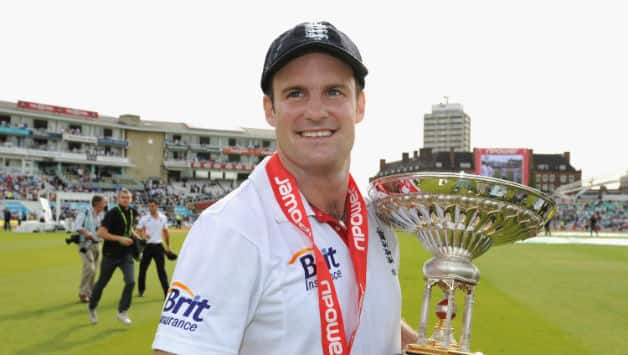 Born on March 2, 1977, Andrew Strauss will always be remembered as one of the most successful English captains to have ever played the game. Jaideep Vaidya goes through the life of a true leader in every sense of the world.

There aren’t too many captains in the annals of cricket who are remembered purely for their efficient captaincy, rather than their cricketing skills. Mike Brearley, probably the epitome of a cricket captain, comes to mind. Steve Waugh and Sourav Ganguly are other names that crop up, although both were talented enough as cricketers to be remembered otherwise. While the duo were of the aggressive and assertive type, there were others like Clive Llyod and Stephen Fleming, who gave a whole new definition to astuteness on the cricket field.

Andrew Strauss was none of the above. He did not have any of the aforementioned qualities — at least it didn’t look so to the outside world. But Strauss managed to get the job done, and how!

During his 50 Tests in charge of the England team, Strauss won two Ashes — one at home, and the other being the first time the Three Lions won a series Down Under in 24 years. In 2011, Strauss reached the ultimate pinnacle as captain when he led his side to the No 1 spot in the ICC Test rankings after whitewashing India 4-0 at home.

He played exactly 100 Tests in an international career that spanned just eight years, amassing 7,037 runs, including 21 centuries. One wonders what he could have achieved if he had played and captained a little longer.

Born in South Africa, Strauss began his playing career in Sydney, before indulging himself in the English cricketing scene. He was selected for Middlesex, who are stationed at the cricketing Mecca — Lord’s — when he was 20. Here, he interacted with fellow opening batsman Justin Langer, who, according to Strauss’s own admission, was “a great example” and role model. Observing Langer’s work ethics and dedication, Strauss imbibed the qualities that would later help him rule over the world of cricket.

Soon enough, he was to become captain of Middlesex, ahead of senior players such as Paul Weekes and Phil Tufnell, when the incumbent Angus Fraser retired suddenly. Strauss was just 24 at the time, and had to grow and learn the responsibilities of leading a team rather quickly.

In May, 2004, Strauss got the coveted England call-up during New Zealand’s tour to the country when Michael Vaughan had to withdraw from the side due to an injury. As fate would have it, Strauss was to make his debut at his home ground, Lord’s — a place he knew so well. It was as if the writing was already on the wall, or should we say, on the Lord’s honours board, as Strauss went on to become the 10th Englishman to score a century on debut. He almost became the first man from his country to get a ton in both innings on debut, but was unfortunately run out by Nasser Hussain on 83.

In December the same year, Strauss went on his first overseas tour with England to South Africa. In his first innings, he scored 126 runs that helped set up a seven-wicket win for his team. England won the series 2-1, and Strauss had now officially announced his arrival on the international stage.

The following year, as England won a memorable Ashes series 2-1 at home, Strauss was the only batsman from both sides to register two centuries. He scored 1031 runs in Tests in 2006, but went through a major slump the following year. As England were humiliated in the Ashes reversal 5-0 Down Under and were knocked out of the 2007 World Cup, Strauss, who had been in horrendous form, was dropped from both the Test and ODI teams.

After playing in domestic matches, he managed to force himself into the last-chance saloon in March, 2008, when England toured New Zealand. He was picked for the final Test and scored a duck in the first innings, but just when you thought he would never play for England again, he scored a career-saving 177 in the second innings to temporarily silence his critics. The fact that he had flourished on a good batting track did not matter, as the confidence in his own abilities was back. “There was no way that I was going to be caught at extra cover in that innings,” he said in an interview. “There was nothing carefree or relaxed about that innings. I just battled.”

As Strauss went about cementing his place in the England team with consistent performances up the order, it wasn’t long before national captaincy came calling. In 2009, after the captain-coach duo of Kevin Pietersen and Peter Moores engaged in fisticuffs, Strauss was the benefactor as he was made skipper and Andy Flower appointed team director. They were two appointments that were to forever change the fortunes of England cricket, period.

Captaincy can often affect a player the wrong way, no matter how great a cricketer they are. Brearley, in his brilliant book, The Art of Captaincy, had suggested that, ideally, a captain should be one who comes in to bat at No 4 or 5 and does not have the burden of opening the batting for his team. Many, such as Sachin Tendulkar, had proved Brearley right. But Strauss was hardly concerned. “I don’t think it matters. The right man for the job will do it well…,” he told BT Vision. “I found that if anything the captaincy helped my batting, because it made me think more about the game situation.”

If his assertion wasn’t enough, Strauss went on to lead England to another home Ashes triumph in 2009 and scored 474 runs in the five-match series, which was the highest tally for both sides. Two years later, he achieved the impossible, as England shocked the Australians in their own backyard 3-1. Strauss gave a lot of credit to Flower following that win, but that was just how Strauss was — humble, modest and behind the scenes.

He wasn’t an aggressive or inspiring captain. If Manchester United’s Roy Keane was on one end of the spectrum of skippers who led from the front with their combative attitude, Strauss was definitely at the other end. He went about his responsibilities in a quiet, disciplined and calming manner; he was not England’s macho man, but an excellent motivator. He knew how to get the best out of his team without much fuss, and his teammates respected him immensely.

It wasn’t that Strauss was a mediocre batsman, either. Preferring to play on the backfoot, he belonged to the school of opening batsmen that has molded players such as his successor to English captaincy, Alastair Cook, and South African skipper Graeme Smith. ‘Swashbuckling’ is a word you can never associate with them. They are the textbook Test cricketers, who will execute the cover drive and square cuts to the tee, but will rarely go for unorthodox shots such as the reverse-sweep.

This gives the impression that Strauss wouldn’t have been a good limited-overs player. True, his statistics in One-Day Internationals (ODIs) are not as comprehensive as his Test outings; he has just six hundreds to his name in 127 matches, scoring 4,205 runs at 35.63. But Strauss managed to come to his team’s aid when required. One of his most memorable one-day innings came in the now-forgotten tied match between hosts India and England in the 2011 World Cup, where Strauss scored a magnificent 158 to help England almost chase down 339.

This was one of the very few memorable innings off Strauss’s bat in his career. Often, his efforts were overshadowed and not given due credit because of the performances of others, both within his team and from the opposition. Not many remember that Strauss had scored hundreds in either innings of the famous India-England Chennai Test in 2008, only to be pushed away from the spotlight by Tendulkar’s fourth-innings opus.

But, perhaps, that was how Strauss liked it. Perhaps, he did not want to be the centre of all attention. Perhaps, he was someone who liked to come in, do his job to perfection, and leave. Unfortunately, his exit from the world of cricket in 2012 did not follow those lines after he got embroiled in the Kevin Pietersen text controversy. For many months, Strauss refused to come out in the open with his side of the story. He said that he did not enjoy “airing dirty laundry in public”.

However, circumstances forced him to come out eventually as he realised it was affecting his teammates’ performances on the field, after England lost their World No 1 status to South Africa following a 0-2 defeat at home.

“It’s one of our core values in our team that what goes on in the dressing room stays in the dressing room,” he said at a press conference. “Any time anyone has fallen foul of that they have been disciplined — and rightly so. It’s about mutual respect and trust, and that is a core issue that is central to resolving this.”

As it turned out, his 100th Test at his home ground — Lord’s — where he oversaw his side lose the match and, thereby, the series, turned out to be his last. Strauss announced his retirement at the end of August, 2012, in an emotional press conference. It was definitely not how he would have wanted to go out; and it certainly isn’t how he deserved to go out.

Michael Clarke is in a fantastic period of his career: Greg Chappell