On August 25, 1995, a 20-year-old Andrew Symonds wrote his name in the record books with 16 sixes during his innings of 254 not out for Gloucestershire against Glamorgan. In the process, he broke John Reid’s record of most sixes in a First-Class innings. 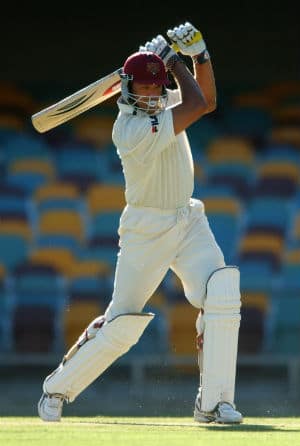 On August 25, 1995, a 20-year-old Andrew Symonds wrote his name in the record books with 16 sixes during his innings of 254 not out for Gloucestershire against Glamorgan. In the process, he broke John Reid’s record of most sixes in a First-Class innings. If that wasn’t enough, he returned in the second innings to bludgeon four more to take his tally to 20 for the match — which was another record. This came at a time when England were trying to get him to play for them even as his Australian background kept his heart Down Under. Nishad Pai Vaidya recalls that innings and the happenings off the field.
There was something about the Australian bred Andrew Symonds that made England woo him. As a youngster, he exhibited his copious potential with a few breath-taking knocks, where he made hitting look all too easy. Although, he was raised in Australia, his birth in Birmingham allowed him to sign a deal as an English player for Gloucestershire and invoked great interest in England. But, when someone smashes 16 sixes in a First-Class innings to break the record at the age of 20, one cannot help but marvel at the talent of the man. Playing for Gloucestershire against Glamorgan, he notched the record on this day during his innings of 254 not out at Pen-y-Bound, Abergavenny.

Symonds had played his age group cricket in Australia and was also selected for their national Under-19 side for the tour to India. On that tour, he played alongside Michael Hussey and Brett Lee, and against the likes of VVS Laxman. He then made his senior debut for Queensland during the 1994-95 season and served notice with an innings of 108 not out against Graham Gooch’s touring Englishmen. He was then signed up by Gloucestershire for the 1995 county season.

To say that Symonds’s arrival in England was spectacular is an understatement. In his very first County Championship game for Gloucestershire, he smashed 161 off only 140 balls with 21 fours and four sixes. In his very next game against Somerset, he plundered another hundred. Was that a sign of things to come for the Queenslander?

Symonds was consistent and had already hit three hundreds in the season when Gloucestershire travelled to the Welsh town Abergavenny to face Glamorgan. Ironically, it is the home of Malcolm Nash — the man who was smashed for six sixes in an over by Garry Sobers. The home side, Glamorgan, won the toss and elected to bat first.

Captain Hugh Morris (67) and David Hemp’s (71) 144-run partnership set up a base for Glamorgan to reach 334. A late vigil by Darren Thomas (78) eventually pushed them to that score. Martyn Ball and Javagal Srinath picked up four wickets apiece. Early on Day Two (August 24), Hamish Anthony and Steven Watkin troubled the Gloucestershire top order. Symonds walked in at 79 for four and lost skipper Mark Alleyne soon after. The score was 79 for five when wicketkeeper Reggie Williams joined Symonds in the centre.

From that point onwards, Symonds unleashed his fury and spared none. Anthony and Watkin were now taking a pasting. Even the spinners Robert Croft and Neil Kendrick were not spared. It was a contrasting show at both ends. At one end, Symonds was going berserk, while at the other, Williams gave him obdurate support with a gritty knock. The 20-year-old was displaying his game-changing abilities with this knock and personal milestones kept coming.

As the day progressed, he kept plundering the bowlers to all parts. He reached his fourth hundred of the season and then passed 1,000 runs in the County Championship when he was on 133. In his very first season in England, he was making waves with these performances and clatter could be heard by the England team management. Williams and Symonds’s partnership had rescued the day for Gloucestershire. Ultimately, it came to an end when Williams was dismissed by Croft for 52 (135 balls). The 213-run partnership was a huge relief and put them in sight of Glamorgan’s first innings total. Consider this: Williams had only contributed 52 out of the 213 runs. Ball did not last long and was out after scoring only two. Glamorgan were not 295 for seven when Srinath walked out to partner Symonds.

Symonds also surpassed his previous best of 160. Srinath also joined Symonds in the six hitting band-wagon as Glamorgan finished the day on 373 for seven with Symonds unbeaten on 197 and Srinath on 33. A quiet Welsh town was bracing itself for history on the field of play.

On Day Three (August 25), Srinath fell early for 39. However, Symonds continued as he had recorded his first double-hundred in First-Class cricket. Kamran Sheeraz soon followed Srinath and Symonds now had to bat with the last man, Vyian Pike. Symonds kept hitting and found some valuable support from Pike, who also scored a few boundaries. Matthew Engel was present at the venue during this innings and described the record-breaking 16th six in Wisden: “I was lucky enough to be at Abergavenny to see the 16th six of Andrew Symonds’s innings sail over the outfield, a hawthorn bush and a patch of bindweed and on to a nearby tennis court, giving him a world record.” He broke John Reid’s record of 15 sixes.

Ultimately, Gloucestershire were bowled out for 461, with Symonds unbeaten on 254 with 22 fours and a record 16 sixes. A 20-year-old smashing 16 sixes in a First-Class game! Who would have thought? History has seen numerous precociously talented players, but this was something out of the blue. Symonds’s priorities were not certain then. The Sydney Morning Herald had reported that he had declared his Aussie loyalties but had inked a paper which made him available for England when he signed up for Gloucestershire.

Coming back to the game, Glamorgan made a good comeback after being mauled by Symonds. Hemp and Mathew Maynard’s tons took them to 471. However, Srinath sparked a dramatic collapse as Glamorgan slipped from 424 for two to their eventual score. The Indian pacer ended up with figures of nine for 76. Gloucestershire had to get 344 in a about 60-odd overs. With Symonds in form, anything seemed possible.

As expected, Symonds was in the act again as he stroked 76 off 65 balls, with eight fours and four sixes. That took his count to 20 sixes in the match, which was another world record, surpassing Jim Stewart’s feat of 19. Gloucestershire collapsed though and just about managed to hold on for a draw as they finished on 293 for nine. It all ended in a stalemate, but Symonds’s feat had created ripples. While England were hoping to include him in the ‘A’ squad for the tour to Pakistan, Australia prayed for its talent to come back.
What happened next

Ashes 2013: Cook, Trott, Bell and other England batsmen sucked the soul out of cricket on Day 3 at The Oval