Andy Ganteaume: The cricketer with the highest average in Tests

Andy Ganteaume: The cricketer with the highest average in Tests

Born January 22, 1921, Andy Ganteaume scored 112 in the only Test match he played for West Indies. His slow scoring and anti-establishment attitude sidelined him after an impressive start to his career. Abhishek Mukherjee looks at West Indies oldest living cricketer.

Over decades Andrew Gordon Ganteaume has been the answer to the most popular trick question to baptise new cricket fans. His records has been usurped by multiple people who have scored more on debut, but they have gone on to play more Tests, reinstating Ganteaume to his throne .

Rodney Redmond had scored 107 in his only Test as well, but he botched it up by scoring a meagre 56 in the second innings which brought his batting average down to a measly 81.50. Ganteaume, of course, rests peacefully atop the pyramid of Test batsmen, one step ahead of Don Bradman.

Ganteaume was small, could bat for long hours, relied on composed drives through the V, and had scored 2,785 runs at 34.81 with 5 hundreds from 50 First-Class matches. One may think that the numbers were ordinary, but little Ganteaume also kept wickets in 8 of these matches. He was not spectacular, but was tidy when he was assigned the big gloves: he finished with 34 catches and 3 stumpings. Of course, rather famously, his 112 made him the owner of the highest batting average in the history of Test cricket.

Born in Belmont, Ganteaume played cricket and football for the local Maple Club. Belmont was, as Peter Roebuck wrote in It Takes All Sorts, a place where doors and windows were closed only in the rainy season and everyone knew everyone else s business, good or bad .

The War had broken out by then, and Ganteaume s two-pronged career (he also played football for Trinidad) was punctuated by his day job as a clerk at Trinidad Civil Service. He continued to play sporadically for Trinidad (and for North Trinidad in local matches), and it was not until the Barbados match of 1945-46 that he scored his first hundred.

In that match at Queen s Park Oval the tourists declared the innings closed at 343 for 8 before Ganteaume went out to open with Vic Stollmeyer; the pair added 112, and Ganteaume added 152 more with Kenneth Trestrail before he fell for, by some eerie coincidence, 112. The number would come back in his life.

By now Ganteaume had been promoted to the top of the order a role he clearly resented. In those days West Indian cricket was obsessed with the idea of a keeper opening because his eye was in. Of course it was utter madness, he told Roebuck years later.

A few months later he managed a career-best 159 against Jamaica at Sabina Park. He impressed the selectors when he was selected for both MCC s tour matches against Trinidad at Queen s Park Oval: with scores of 101, 47*, 5, and 90 in the four innings, Ganteaume was selected to play the second Test of the series at the same ground.

An English journalist covering the match wrote that he had no praise for a batsman who in these beautiful conditions takes a whole day to make a hundred. I was not a privileged boy. I had to make a hundred to get into the argument, Ganteaume told Roebuck later to defend the pace at which he had scored.

The first Test at Kensington Oval had witnessed the great George Headley leading the side. West Indies had seven debutants in the Test (England had five, including Jim Laker); among them were two members of a trinity that would go on to rule West Indian cricket for a long time Everton Weekes and Clyde Walcott.

The second Test saw two more debutants from either side. The West Indian debutant other than Ganteaume was Frank Worrell: the triumvirate was thus formed. Ganteaume was selected as a replacement for the injured Jeffrey Stollmeyer and played as an opening batsman (Walcott kept wickets).

Billy Griffith, the English debutant opening batsman, was also a reserve wicket-keeper, but played as a batsman as Godfrey Evans kept wickets. It was possibly the only Test where two debutant openers, both wicket-keepers who did not keep wickets in the Test, scored hundreds.

Griffith s 140 took England to a formidable 362 despite Wilf Ferguson s five-for. Ganteaume opened batting with George Carew, who scored a delightful hundred before stumps on Day Two. Ganteaume, too, got into the action, and West Indies finished the day on a comfortable 160 without loss with Carew on 101 and Ganteaume on 52. With Carew in sparkling form, holding up one end and letting the other batsman was a sensible to do which was exactly what Ganteaume did.

Carew fell for a dazzling 107 the next morning, but Ganteaume carried on. Weekes scored a quickfire 36 before Worrell walked out to join Ganteaume at the crease. It was then that the scoring rate took a beating (it must be remembered, however, that West Indies were 136 runs behind when Worrell had joined Ganteaume). The score meandered along, and Gerry Gomez, sensing that some quick batting may put the hosts in a commanding position, sent a note to the batsmen at the crease.

The message was short: Dear Andy and Frank, I want you to press on now. We are behind the clock and need to score more quickly. It is to be noted that the note was sent out to both batsmen, though Ganteaume is usually the one singled out for slow scoring during the innings. Worrell was, after all, the more attractive of the two batsmen. As Wisden wrote, Meanwhile Ganteaume maintained his defiant attitude, but by this time everyone was admiring the cultured batting of Worrell.

Ganteaume had reached his hundred by the time the note had arrived. Wisden wrote that Ganteaume promptly replied by lifting the ball to extra cover, where Ikin accepted the catch off Howorth. He had scored 112 with 13 boundaries. It was the first Test century by a Trinidadian in Trinidad. Worrell, on the other hand, batted on to score 97.

While Ganteaume had scored at 22.4 runs an hour Worrell had scored at 29.8, so the slow scoring that is often cited as the reason for Ganteaume s subsequent axing was probably applicable to Worrell as well. It must be noted here that Ganteaume had opened the innings, while Worrell had walked out to bat at a comfortable 226 for 2 and the fact that Howorth had consistently bowled outside the off-stump to a 7-2 field.

Ganteaume might still have been retained, had rain not cut Day Four short by two hours. West Indies had managed a 135-run lead, but the delay meant that England s 275 was enough to see them out of danger. Gomez opened with Weekes and Walcott and sent Worrell at No. 4 (along with Foffie Williams at No. 3, making it four Ws in a row), but it was a valiant effort that ended at 72 for 3.

Ganteaume was never recalled. Due to some ridiculous pre-series agreement John Goddard (who had made his debut in the first Test at Kensington Oval) went out to toss for West Indies in the third Test at Bourda. Goddard picked up 5 for 31 in England s first innings a spell that eventually decided the Test as West Indies won easily. Goddard led again at Sabina Park where West Indies claimed the series.

With the Ws coming into the side Ganteaume had little chance of making a comeback to the Test side. There have been speculations that his strong anti-establishment attitude did not help either: he was certainly not one to give in to the oligarchy of the Caucasians-dominated West Indian cricket of the era.

He was not picked for the subsequent tour of India after being a part of the initial 24. What was more heartbreaking for Ganteaume was the fact that Carew, not a part of the original 24, was selected to tour. He did not make it to the historic England tour of 1950 either and went back to domestic cricket, playing till 1953 without a recall.

The fact that Ganteaume had never been a part of the selector s shortlist had much more to do with the politics of the day and the considerable influence of the white hierarchy in the colonial British West Indies, Fazeer Mohammad later wrote in Trinidad & Tobago Express.

He was a part of one of the more one-sided First-Class matches on in Caribbean soil: while Ferguson and Sonny Ramadhin routed Jamaica for 155 and 230 Trinidad declared at a humongous 581 for 2: Jeffrey Stollmeyer added 286 with Ganteaume (who scored 147) and 295 more with Trestrail.

Ganteaume came back out of the blue in 1956-57, and was out of nowhere selected for the England tour of 1957 at an age of 36. He scored 800 runs on the tour at 27.58, the highest being 92 against Glamorgan at Swansea. He played against the touring Pakistanis next season and quit cricket thereafter.

Once again he made a comeback against Barbados at Kensington Oval at an age of 42. He led Trinidad and Tobago, scored 4* and 11 against Charlie Griffith, and that was it; the tourists were drowned by a 318-run partnership between Cammie Smith and Seymour Nurse.

Ganteaume worked as a selector in subsequent years. He was the manager of the West Indies national side in 1973-74. He also coached Maple Club in football.

His autobiography My Story: The Other Side of the Coin came out in 2007. Mohammad wrote: no-one reading the book is left in any doubt as to his utter contempt for The Establishment , as he refers to them regularly in a manner that would not be out of place were it Luke Skywalker or Han Solo commenting on Darth Vader’s evil Empire .

He won the prestigious Hummingbird Gold Medal in 2010. In October 2011 the Sir Frank Worrell Memorial Committee bestowed upon Ganteaume the Sir Frank Worrell Noble Spirit Award for his contributions to local sport and development to commemorate the Golden Jubilee of the famous West Indian tour of Australia.

He passed away in his sleep, on February 18, 2016, less than a month after his 95th birthday. Of West Indians no Test cricketer has lived longer. He was survived by three daughters the first working with retarded children, a second in land distribution, and the third a ballet dancer. India can still regain the number one spot this month 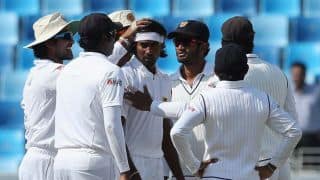