Arjun Tendulkar and the eight-year-old cricketer, Musheer Khan faced off in a Kanga League 'G’Division match in Mumbai. Nishad Pai Vaidya describes the face-off between the two of the most followed junior cricketers in the Mumbai club circles. 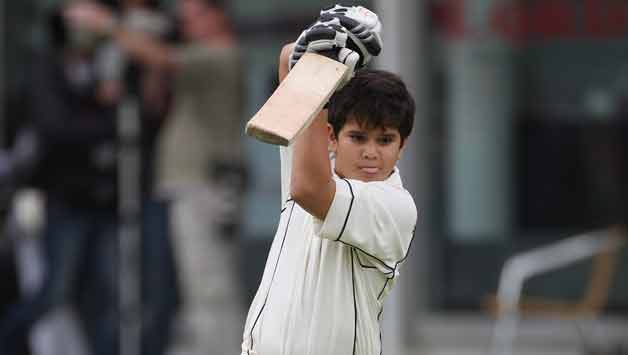 Arjun Tendulkar (above) opened the batting for Young Parsees Cricket Club and scored just one run. During the breaks Arjun and Musheer Khan indulged in long conversations © Getty Images

Arjun Tendulkar and the eight-year-old cricketer, Musheer Khan faced off in a Kanga League ‘G’Division match in Mumbai. Nishad Pai Vaidya describes the face-off between the two of the most followed junior cricketers in the Mumbai club circles.

It is not often that a Kanga League ‘G’ Division match makes the headlines. But, if you have an eight-year-old prodigy, known for dismissing Yuvraj Singh, taking on the son of a cricketing legend, then the game invariably attracts eyeballs. When Musheer Khan’s Sportsfield Cricket Club faced off with Arjun Tendulkar’s Young Parsees Cricket Club at the Oval maidan on Sunday, it became the talking point at the small Sydenham ground. The question everybody were asking: Who would get the better of the other?

Although a serious cricket match was taking place, there were scores of children playing the sport with the tennis ball in and around the main wicket; unafraid of being hit by the hard ball. However, Arjun and Musheer were the easiest to spot in the huge crowd. It was a task to keep pace with the serious cricketing action, but the two young cricketers were undoubtedly the main focus and no one could miss them. Musheer, being only 8-years-old — the youngest ever to play the Kanga League — was the shortest in the whites. When someone asked an onlooker where Arjun was, the reply was, “Where the cameras are focused!” Yes, television cameras and half a dozen journalists were there to follow this contest.

Young Parsees batted first and Arjun opened the batting, scoring just one run. During his innings, he was hit on the foot and looked in a bit of pain. But, the moment he came back to the hut, the focus didn’t shift off him. Cameramen took pictures from all angles at a distance. The young children playing around the small hut kept circling the tent, looking at their idol’s child with a sheepish smile. One of them said to the other, “Sachin ka ladka hai. Aake dekh!” (He is Sachin’s son. Take a look!) Then, there were a few boys who kept moving past the tent as Arjun had his eyes on the proceedings. One of them told the other, “Aaj kitni baar dekha hai!” (How many times have we seen him today!)

But, once Musheer came on to bowl, all eyes were on the wicket. Bowling with a lovely action, he was giving it that typical loop his father, Naushad Khan always encouraged him to bowl. Having taken 14 wickets in the tournament in the lead-up to this game, Musheer did not account for any of his team’s first six scalps. However, after lunch, he cleaned up the tail single-handedly. Varying his pace, he had the batsman playing forward and using the flight to trick them. A silly point was placed to keep the batsman thinking.
Musheer then had his first wicket when the batsman tried to sweep him. However, the wicket-keeper swiftly moved towards the leg-side and held it with his gloves. There was a huge appeal and the umpire raised his finger. This was just the start.

The exhibition of spin bowling continued as the next man was trapped leg-before. There were many vociferous appeals with Musheer almost going down on his knees, pleading with the umpire. And, as he went back to his mark, the non-striker, well into his 30s, patted the young Musheer almost as if he was saying, “It will happen sometime!” The opposition too appreciated him. And, he ultimately did get a leg-before. However, the man who consoled him was also his victim — owing to a bat-pad at short-leg. Musheer then finished the innings with a leg-before to end up four for 66.

During the breaks, Musheer and Arjun indulged in long conversations. There were laughs and intense chats throughout the lunch break. On the field they were tough competitors, but off it they shared a good rapport. Arjun may be 14 –years-old, but treated the much younger Musheer as his peer, for the boy is way ahead of his years.

When Sportsfield started their innings, everybody waited for Arjun to come to the bowling crease. However, once Musheer walked in at No 3, his competitor was brought into the attack. Knowing that the wicket was aiding spin, he decided to bowl a few tweakers. Being a left-armer, he could bowl the orthodox or even chinaman. His first ball to Musheer was a flighted full-toss, which the batsman worked to the leg-side for a single. With the bat in hand and completely padded up, Musheer looked like a gladiator with oversized weapons. Yet, he was sound and balanced. Arjun then went with the long-run up to bowl seam-up and kept it outside the off-stump.

Ultimately, Musheer was dismissed by another bowler for three and the interest fizzled out thereafter as Arjun was also taken out of the attack. In the face of a total of 175, Sportsfield stuttered and lost wickets at regular intervals, but managed to see off the day and finished at 70 for seven. Arjun finished with figures of 3-1-6-0. At the end of the game, both the youngsters shared a laugh and Arjun pointed to his bandaged toe as Musheer expressed his fright.

During the Sports Journalists Association of Mumbai Awards in September, Sachin Tendulkar had asked the scribes to let his son enjoy cricket. And, Arjun does enjoy it and by now, he must be used to all the attention. Plus, he has the bowling variety his father is known for. Yet, for this game, one couldn’t help but stay away as there was a rare contest within a contest on show. Both the boys have been in the limelight for contrasting reasons, with cricket being the only common factor. And, they continue to chase their dreams with the support of their respective fathers.