The 2014 budget gives hope for cricket to head into uncharted waters.

The #acchedinaagaye tag was put to test today as the Narendra Modi led, Bharatiya Janata Party (BJP) government announced the Union Budget of the year 2014. Finance Minister Arun Jaitley announced the sports budget a while ago which definitely looks promising.

With Jammu and Kashmir and Manipur set for a revamp in the sports sector, the question remains, can we expect more international cricketers from these states?  Till date Jammu and Kashmir produced only produced one international cricketer in the form of Parvez Rasool. He made it to the India A squad in the year 2013 because of his impressive all round performances in the domestic season.

In the same year he was roped in by the Pune Warriors and made his Indian Premier League (IPL) debut against the Kolkata Knight Riders. In this match his figures were impressive as he picked up the wicket of Jacques Kallis, giving away only 23 runs in his four overs. This year he played under the Sunrisers Hyderabad franchise. Rasool made his One Day International(ODI) debut for India finally in Dhaka this year against Bangladesh.

North eastern states did not produce a single international cricketer till date. The proposed Sports University in Manipur might just help produce cricketers. Jaitley also was keen on inviting neighbouring countries like Nepal and Bhutan to participate in the games of the Sports University. Nepal already played in the qualifying rounds of the ICC World 20 this year.

These north eastern states along with Jammu & Kashmir did not have adequate sports facilities. This was the prime reason so as to why they could not produce any international cricketer. Therefore, Modi led BJP government have allotted over 300 crores to build facilities to international standard. There are players who tend to play for Assam or Tripura once they age with time. Currently, Dheeraj Jadhav, 34, is playing for the Assam in the Ranji Trophy.

He initially represented Maharashtra and in the year 2011 he was signed to play for for the Pune Warriors India. Assam and Tripura are the only two north eastern states having adequate facilities for cricket unlike other north eastern states. These two states also feature in the East Zone team for the Deodhar and Duleep Trophy along with Jharkhand, West Bengal and Orissa. We would expect these small states to produce more cricketers and cause more problems for the selectors.

Only time will tell if the budget would go on to aid in Indian cricket. At this moment we can only hope but if these above mentioned projects really come up then we are sure to see more of #acchedin.

(Rajarshi Majumdar is a correspondent at CricketCountry. He played cricket for all age levels under the Cricket Association of Bengal (CAB) for over 12 years. Apart from cricket he is an avid follower of football, supports Manchester United and a foodie at heart.) 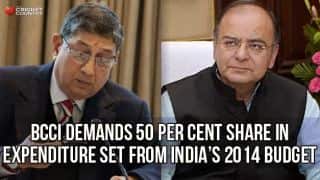