On May 9, 1959, one of the finest Sri Lankan fast bowlers named Asantha Lakdasa Francis de Mel was born at Colombo. He was the torchbearer of the Sri Lankan attack when the country played its first Test match. He picked up 59 wickets in 17 Test matches at a time when Sri Lanka played few games. Sarang Bhalerao revisits Asantha de Mel’s cricketing days. 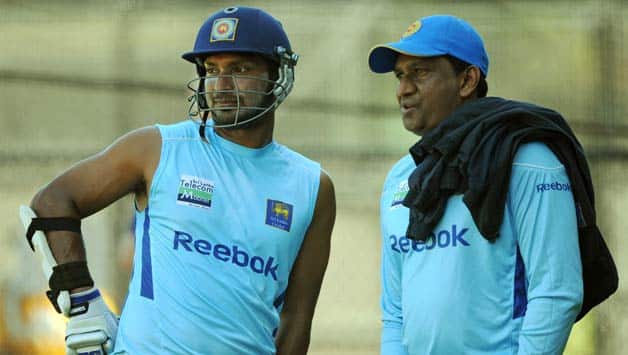 On May 9, 1959, one of the finest Sri Lankan fast bowlers named Ashantha Lakdasa Francis de Mel was born at Colombo. He was the torchbearer of the Sri Lankan attack when the country played its first Test match. He picked up 59 wickets in 17 Test matches at a time when Sri Lanka played few games. Sarang Bhalerao revisits Asantha de Mel’s cricketing days.

Cricketing history is replete with players who have excelled in other sports as well. Ashantha de Mel is one such, who also presented Sri Lanka in Bridge at the Commonwealth Games. “My father’s sister Manel Trepte is a bridge teacher. She taught me the basics and the finer points of the game,” de Mel told in an interview to Daily News in 2004.

de Mel was one of the torchbearers of Sri Lankan bowling attack in the 1980s who had a high arm action who bowled quality outswingers.

He was part of Royals College cricket team. The college had one of the best cricket teams in the island. In 1979, he joined the Sinhalese Sports Club (SSC). He worked extremely hard on his physical fitness and developed tremendous control over his swing. He had the ability to bowl fast for long periods. He had the heart of a fast bowler and soon emerged as one of the country’s finest bowlers.

Sri Lanka became Test cricket’s newest entrants in 1982. Bandula Warnapura won the toss and chose to bat first in his country first-ever Test – against England. Wisden had this to say about Sri Lanka’s fast bowler who bowling got quick attention: “Asantha de Mel, 22, a strongly-built computer programmer, average height, is currently the best fast bowler on the island. And in his fifth and sixth overs he ‘did a Lillee’ by prompting a lame steer to gully by [Geoff] Cook, yorking [Chris] Tavare second ball, and winning a dubious lbw claim against [Graham] Gooch. Yet when England lunched at 44 for three, de Mel was close to tears of frustration, not elation, for [Keith] Fletcher had flicked him to short-leg only for the diving Somachandra de Silva to miss his last, frantic grab for the ball. This was the big ‘if’ of the match. England, batting last against three spinners, would have been four down, 174 behind, with a long tail.”

Ashantha de Mel picked up Ian Botham when a benign long hop was bottom-edged onto the stumps and ended up with four for 70. Although Sri Lanka lost the match they had unearthed a potential bowling superstar in de Mel.

De Mel’s picked up 11 wickets in the three Test matches against Pakistan. The wickets were flat and unresponsive; albeit with the new ball De Mel often generated extra bounce. That accounted for Manzoor Akhtar in the first Test match at Karachi.

In September 1982, Sri Lanka came to Chennai for a one-off Test match against India. India were eyeing a victory, but de Mel and Somachandra de Silva killed time with their defensive ploy. When India managed to get rid of the tail; it was probably a little too late for the home team. India, needing 175 off 28 overs, went for the target, but de Mel’s incisive bowling thwarted their plans. At 78 for two, India looked heading for victory, but de Mel dismissed the dangerous Kapil Dev, while Sandeep Patil was run out. de Mel took five wicket in the innings and had played his part well.

In the first Test match at Colombo, de Mel picked up five for 64 against India, which included the wickets of Ravi Shastri, Dilip Vengsarkar and Kapil Dev. The first Test match ended in a draw. de Mel played a pivotal role in Sri Lanka’s first Test win over India at the P. Saravanamuttu Stadium, Colombo on September 11, 1985 in which he bagged five wickets in the match.

Injuries and an early retirement

A year later, against Pakistan at Karachi, he picked up the first six wickets. But de Mel’s international career was riddled with injuries, though he was a big asset when fully fit. Slowly his bowling lost the zip and within the next two years he hung his boots. A knee injury curtailed his promising career and at 28 de Mel played his last international game.

Later, he was on the Sri Lankan selection committee and often received flak from former players for calling spade a spade. He had called the Marvan Atapattu-led Sri Lankan team “selfish”. Atapattu’s team won the tri-series final in Pakistan and Atapattu said de Mel’s comments had motivated them. He also went on to say that he had lost respect for the national selectors.

De Mel was sacked as a national selector in 2010 amid claims of political bias and favouritism, but was reappointed as chief selector by the Sports Ministry in January 2012. The move generated uproar from journalists of several independent English dailies on the island.

De Mel, however, will be remember as a fast bowler who did much for the team in their formative years in international cricket.