The first ever New Year's Ashes Test was one of the darkest affairs in the history of the contest.

Australia made eleven changes for the MCG Test that started January 1, 1885. Abhishek Mukherjee looks at the first Test that had started on a New Year.

The Ashes of 1884-85 was one of the darkest contests ever in the history of the urn. England had sent out almost a full-strength side, and Australia were ready for the contest. Once the tourists arrived, the early days were marred with minor accidents (George Ulyett, for example, was fortunate when he fell from the boat on the shark-infested River Clarence), but that seemed to be a mere trifle compared to what followed.

Billy Murdoch and his men refused to play for Victoria or New South Wales [NSW] against the tourists, citing fatigue as the reason. When the English got ready, however, the Australian team played a “rival match” at Sydney. His demands were simple but, as per Alfred Shaw and Arthur Shrewsbury, preposterous: he demanded half the gate money for his team.

Shaw and Shrewsbury mentioned that the demand “coming from a team supposed to be composed of amateurs and playing at home, staggered us. We replied that 30 per cent was the utmost we could afford to give. We held it was absurd, not to say ungenerous, to expect the same sum for playing at home as would be paid to a team who had travelled thousands of miles in pursuit of their profession.”

At home, the English received £10 per person match, which made the 30 per cent offer almost outrageous — more so as Shaw offered an extra £20 per person per match. The bargain went on till John Creswell, a businessman and the South Australian Cricket Association [SACA] Secretary, who had pitched for the first ever Test at Adelaide, eventually offered a flat £450 for the team and a third of any profit. The English team accepted, but only reluctantly.

The Adelaide Test eventually happened with Murdoch and his men eventually turning up. Murdoch led his side to an 8-wicket defeat: he himself scored five and seven. Alec (alternatively Alick) Bannerman’s split finger did not allow him to bat in the second innings, an incident which certainly did not help Australia’s cause.

Arunabha Sengupta wrote: “The Australians did not really seem interested in the game. Only George Giffen, wanting to make this historic event in his home city a success, practiced diligently with Percy McDonnell and George Blackham. But, none of the others made an effort. Least of all the captain. Four days before the match, he married Jemima [daughter of the John Boyd Watson, the gold magnate who was one of the richest Australians of the time] and was still sauntering in his pink misted world.”

The gate sales, unfortunately, had amounted to a paltry £792 which left SACA in a huge debt. Victoria Cricket Association [VCA] refused to let the players dictate terms; James Lillywhite, the English manager, offered his Australian counterpart George Alexander 30% of the gate fee – an offer that was turned down again.

Lillywhite then offered £20 per person but that was turned down as well: the Australians would not play for anything less than 40 per cent of the gate fee. Tom Horan had almost pleaded: “Make what you can in the old country but in Australia act a little generously towards our visitors.”

VCA did not agree, and the entire Australian team from the Adelaide Test boycotted the Test. “It would be a good thing for Australian cricket if they never played here again,” said Horan later. He was then asked to assemble a team. He ended up recalling Sammy Jones (who had played three Tests before) and nine debutants.

This meant that Blackham missed a Test for the first time. Blackham had been the only cricketer to play in all the 17 Tests played till then, but eventually missed out on the 18th Test ever. The run thus came to an end.

The second Test at MCG was expected to be a complete mismatch (it was essentially a second-string Australian side taking on a full-strength English one). Shrewsbury won the toss and elected to bat on what seemed like a flat pitch.

Shrewsbury opened with William Scotton, who did not seem comfortable against the left-arm seam of William Bruce. Bruce bowled a faster delivery to bowl Scotton. The score was only 28, but a 125-minute partnership of 116 between Billy Barnes and his captain helped England to safety.

Barnes finally dragged a wide delivery from Sam Morris to the stumps for 58; Shrewsbury himself followed soon afterwards for 72, being caught by Jack Worrall at “short slip”. Horan turned to Jones, who, along with Bruce, put a check on the English line-up and reduced them to 204 for 7 soon afterwards.

Jones was on hat-trick when Maurice Read and Ulyett were bowled off consecutive deliveries. William Attewell played out the third ball and set down to play a big innings with Johnny Briggs. Playing only his second Test (he had made his debut at Adelaide) Briggs took the Australian attack by the horns, and Attewell responded to the call.

The pair added 50 in no time before Attewell tried to clear the ground off Worrall and was caught by Jones. Bobby Peel put up some resistance, holding one end up as Briggs went on with his strokeplay. Stumps were called when Peel was bowled by Jones after a 49-run partnership, of which Peel had scored 5.

Briggs remained unbeaten on 65 with only the wicket-keeper Joe Hunter to follow. England were on 303 for 9, already in a commanding position.

Briggs and Hunter batted for exactly an hour the next morning, adding 98. While Hunter contributed with an invaluable 39 with 4 fours and a five (when the ball soared over the ladies’ pavilion), it was the Lancastrian who lit up the show with merciless hitting.

Briggs reached his hundred and was dropped on 104 and 117 before eventually falling to a magnificent catch by Horan off Jones (to give him his fourth wicket): Wisden wrote that Horan “secured the ball just as he fell flat on his back”. The tourists managed to score 401.

Morris and Jones resumed at 2.15, and both men were back in the pavilion with only 46 runs on the board. Horan then steadied ship with John Trumble (Hugh’s brother). The pair added 78 for the third wicket before Horan holed out to Shrewsbury at point off Peel for a patient 165-minute 63.

Trumble and Jarvis fought gamely before Barnes had Trumble caught-and-bowled brilliantly for a 210-ball 59. Runs were difficult to come by, and a sudden collapse saw Australia reeling at 203 for 7 from 190 for 3 at one time. Worrall, however, helped Jarvis build up a partnership. The pair not only hung around but also scored at a rapid rate.

It seemed that Australia would make it to 302 and make England bat again when Jarvis’ 220-minute vigilance ended: he tried to hit Wilf Flowers out of the ground and Briggs took the catch for a chanceless 82. The last 3 wickets fell for the addition of just 3, and Shrewsbury asked Australia to bat again after a 122-run lead.

Peel had bowled a marathon spell, picking up 3 for 78 off 102.1 overs (68.1 overs). Barnes returned figures of 3 for 50 as well, while Flowers and Attewell had picked up 2 wickets apiece.

Bruce began in a belligerent fashion, scoring 20 off the first 29 as Ulyett ran through Jones’ defence at the other end. Stumps were taken when Horan was caught behind off Barnes. Australia were 66 for 2, still 56 runs behind: they still stood with a serious chance.

There was no resistance from the hosts on Day Four of the timeless Test. Bruce scored 45 with 2 fours and a five, but after his dismissal Peel and Barnes routed the hosts in no time. Barnes returned figures of 6 for 31 and received support from Peel, who finished with 3 for 45. Australia added only 60 to their overnight score.

The innings-defeat was averted, but it took Shrewsbury and Scotton only 5 balls to win the Test by ten wickets and go 2-0 up in the series.

– Australia fought back, winning the next two Tests at SCG, but England claimed the Ashes with a win in the fifth Test at MCG.

– Briggs did not pick a wicket in any of his first six Tests but finished as the highest wicket-taker. He later became the first bowler to reach the hundred-Test-wicket mark, including a freak display at Newlands where he picked up 15 for 28. Briggs’ record of 118 Test wickets stood for six years before Hugh Trumble went past him.

– Blackham led Australia later that series and went on to play 36 Tests, leading in 8 of them.

– Horan never played after the series, though Murdoch did. 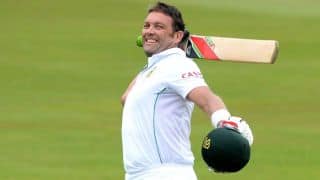