Percy Fender achieved something few have while playing cricket: he hit a six and a duck off the same ball.

January 8, 1921. Frank Woolley and Percy Fender went ballistic in a low-profile tour match at Eastern Oval, Ballarat. Amidst the onslaught, Fender achieved something few have while playing cricket: he hit a six and a duck off the same ball. Abhishek Mukherjee looks back at a most singular shot.

As was inevitable, cricket triumphed over years of atrocities. As always, England and Australia made sure things were back to normal. Ashes 1920-21 became the first Test series after The Great War.

The series has a place in history of its own, for it was the first 5-0 whitewash in Test cricket. To call the outcome one-sided will be an understatement: the margins of victory (377 runs, innings and 91 runs, 119 runs, 8 wickets, 9 wickets) were comprehensive in all 5 Tests.

English cricket had not had time to regain its pre-war standard, lamented Wisden. Indeed, Australia showed in every department that they had recovered from The War way before England.

To be fair, the tourists did a decent job in the tour matches. Of the 8 other matches that were given First-Class status, they won 5 and lost 1.

The match in question, however, is not from one of these matches. The second Test at Melbourne, originally scheduled as a timeless one, got over early on the fourth day, on January 4. That gave the tourists ample time to travel to nearby Ballarat for a two-day odds match: an 11-man representative side of the tourists took on 15 of Ballarat.

The match, as expected, was a usual one-sided contest. Ballarat were reduced to 50 for 4 before one N Philp joined a youngster called Bill Woodfull. These were still early days for Woodfull (he was yet to play a First-Class match), but he scored 50 nevertheless, while Philp got 53. Unfortunately, Ballarat folded for 211 from 183 for 5 (remember, they had 14 wickets to lose).

MCC became 112 for 4 when Percy Fender joined Frank Woolley. The two men, both reputed for their hitting, now treated the local spectators with an outstanding display of strokeplay, much to the chagrin of the fielders: 35 C in the shade is no joke.

Woolley, tall and dazzling, hit 20 fours and 4 sixes in his 159. Fender, having scored a 35-minute hundred about four months back (still the fastest in First-Class cricket), hit 106 with 12 fours and 3 sixes. Several of these 7 sixes landed on the adjacent road.

Rockley Wilson, leading MCC in the absence of Johnny Douglas, declared at 384 for 9, scored at an astonishing 5.82.

Our story involves one of these towering sixes. Fender s shot comfortably cleared the Ebden Street fence of the ground, and was still in no mood to lose altitude. The ball eventually gave in after covering considerable distance and fell inside a property, presumably a farm and killed a bird.

Yes, Fender hit a six and a duck off the same ball.

As for the rest of the match, Bill Hitch and Abe Waddington bowled unchanged for 14.3 overs to bowl out Ballarat XV for a mere 30. 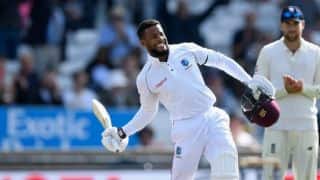 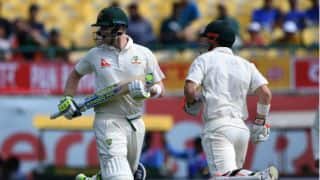