August 10, 1989. For just the third time in the history of cricket did a pair of opening batsmen remain unseparated through a full first day’s play in a Test match. Arunabha Sengupta recalls the memorable feat of Geoff Marsh and Mark Taylor at Nottingham during the 1989 Ashes. August 10, 1989. For just the third time in the history of cricket did a pair of opening batsmen remain unseparated through a full first day’s play in a Test match. Arunabha Sengupta recalls the memorable feat of Geoff Marsh and Mark Taylor at Nottingham during the 1989 Ashes.

The Ashes were already reclaimed. After half a decade of rebuilding a team from scratch, of newcomers and shadows of retired greats, Allan Border’s team of young guns finally started firing. The England team was blown away by the continuous volley of superb performances from a team of erupting talents.

At Headingley the centuries of Mark Taylor and Steve Waugh started the demolition, followed by Terry Alderman expertly snaring quarry after quarry in his favourite hunting grounds of Old Blighty. The saga of dominance continued through the summer, the hosts were humiliated at Lord’s and Manchester. The quality of mercy dropped in large quantities of gentle rain to save them the blushes of another massive defeat at Birmingham.

The Nottingham Test started with Australia up by 3-0, with two Tests left to play. And before the match even got underway, another blow landed on an already tottering England. Gladstone Small withdrew due to injury and for the fifth time in as many Tests a last minute change was made necessary. The resulting new ball pair, Angus Fraser, in his third Test, and debutant Devon Malcolm, looked at the grassless pitch with misgivings. Their cause was not quite helped when David Gower lost the toss and the battered team forced themselves out to spend a day on the field. And it was one of the darkest days for England, with futility written all over it in the steady strokes of the Australian openers.

There was another debutant playing in the Test. Graham Gooch, grappling against the vagaries of Alderman’s late swing, had been shaken out of the side into temporary sabbatical. Michael Atherton, fresh faced from Cambridge, had been summoned to don the England cap for the first time. He ended up experiencing the most disheartening first day on the field. Few would have expected that he would be required as a leg-break bowler before taking guard as a batsman. But such was the sorry tale of the Englishmen. This, in spite of Eddie Hemmings and Nick Cook being in the side as specialist spinners.

True, Malcolm ran in with fire and hostility, his excitement even leading to a couple of balls slipping out as beamers. Taylor and Geoff Marsh were not exactly delighted by the enthusiasm and venom of the young paceman. At the other end, Fraser was accurate, giving away little more than two an over. England fielded much better than they had in the previous matches. Cook flighted the ball with control and managed some turn, and Hemmings did not fare too badly.

Only one bowler looked distinctly off colour, although that was perhaps because of the striking contrast of his efforts against the rich, kaleidoscopic background of his heydays. Ian Botham came on as first change, a towering Ashes hero of the past now chugging along as an unimpressive shadow of his erstwhile giant stature.

However, hard as England did try, the first wicket remained elusive.

It was Cook who made the breakthrough, getting rid of Marsh. But by then it was twelve past twelve on the second morning. Yes, Marsh and Taylor batted through the first day.

The saga of broken records

The batting was not spectacular. Both the openers were solid rather than flashy, their methods based on time honoured principles of discretion against the good deliveries, as they patiently waited for balls to punish. Taylor, playing his first full series, had already established himself as a left-handed rock at the start of the innings. Marsh, who had rushed to three hundreds in his first 10 Tests had been looking in vain for the fourth for his last 21 matches. Here, he sniffed a big score and would not be hurried into anything rash. The bowling, spirited but limited, fell away when faced with the hardened stolidity of the Australian openers. And as the balls hit a combined brick wall of a partnership, records toppled and fell from every strata of run-making.

It started shortly after lunch with the rather puny figure of 89. It had been put together by Bill Brown and Jack Fingleton in 1938 and had stood as the highest Australian opening partnership at Trent Bridge. By tea, the score had doubled and gone past 170 — the highest Australian partnership at the ground for any wicket, achieved by Bill Brown and Don Bradman in that same Test in 1938. Mark Taylor (right) sweeps during his innings of 219 © Getty Images

Soon, other records followed suit. The duo went past Bill Lawry and Bobby Simpson’s stand of 201 at Manchester, 1964, the highest Australian opening partnership in England. In the final session of the day, the frontier of 244 was crossed, another Lawry-Simpson collaboration executed two years later at Adelaide, the highest Australian opening partnership against England.

The day ended with Taylor on 141 and Marsh 125, both having passed their previous best in Tests. The score read 301 without loss. It was the first time that a pair had batted through a full day’s play in England, the ninth time such a feat had been accomplished in the history of Test cricket anywhere. Taylor and Marsh had also joined the two other opening pairs to bat through the first day of a Test match — Vinoo Mankad and Pankaj Roy had done so against New Zealand in 1955-56 and that incomparable pair of Lawry and Simpson had done it again versus West Indies in 1964-65. The duo walked out to an admiring applause from the stands and were followed by a battered, bruised and exhausted England side.

When play started on second morning, partnership and run scoring feats of all dimensions were in serious danger of toppling. Two of them did. The first was 319, the highest ever partnership at Trent Bridge, set by Alan Melville and Dudley Nourse in 1947. And when they went past 323, the pair rewrote the 77-year-old mark set by Jack Hobbs and Wilfred Rhodes at Melbourne in 1912. 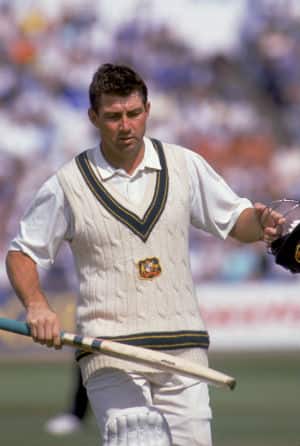 Geoff Marsh walks back after being dismissed for 138 © Getty Images

It was 329 when finally Marsh made a mistake against Cook and Botham clutched at the ball as if his life depended on it. The opener walked back for 138. The first wicket went down after seven hours and 12 minutes of blemishless batting. It had taken 744 balls for England to taste success. The partnership stands as an Ashes record to this day.

The departure of his partner did not really affect Taylor. He batted on for another two hours to compile an impeccable 219 from 461 balls with 23 boundaries. Taylor went on to score 71 and 48 in the final Test at The Oval to end the series with 839 runs, next only to the monumental feats of two of the greatest giants in Ashes history — Bradman’s 974 in 1930 and Wally Hammond’s 905 in 1928-29.

Coming back to the action at Nottingham, David Boon and Allan Border, having waited patiently for more than a day for their turn, notched up fluent half-centuries. The extras amounted to an impressive 61. Australia declared at 602 for six.

Only Robin Smith was prepared to fight back for England and did so with some spectacular hitting. But, after the mammoth opening stand of the Australian innings, the Englishmen looked eager to balance out the cricketing scheme of things. Martyn Moxon was out to the fourth ball of the first over bowled by Alderman. And two balls later Atherton followed with a second ball duck.

Smith counterattacked with a ferocity bordering on desperation, and his pull off Trevor Hohns struck David Boon at short-leg, tearing the helmet off his head. The stocky Tasmanian had to be helped off the field, but was up in no time after a couple of aspirins and some quiet time spent prone on the massage table.

England’s cause was not helped by the finger-dislocation Botham had suffered while attempting a sharp chance in the slips. He batted one handed and at No 9 in the first innings, and did not venture to the crease in the second. For Australia, Alderman picked up five again in the first innings, and the wickets were amicably shared by all bowlers in the second. England lost by a gigantic margin of innings and 180 runs, with only Atherton providing some resistance in the second innings. It was the heaviest defeat they had ever encountered against Australia at home.

The series now stood 4-0 in favour of Australia. It was the second time Australia had won four Tests in England, after Bradman had shown the way in his last series in 1948. However, this was the floodgates had been broken and such routs would be the norm in the years to come.

Cricket should be run and managed by players to curb corruption