Australia relived the heartbreak of the Ashes 2005 Test played at Edgbaston, losing by 14 runs to bring down the curtains on a thriller.  In five days, the 2013 edition of the premier Test series of the game pooh-poohed naysayers of long form cricket, providing plenty by way of thrills and, er, controversies in a relentlessly see saw opening salvo at Trent Bridge, Nottingham.  Australia would only wish, though, they had finished on the right side of it. 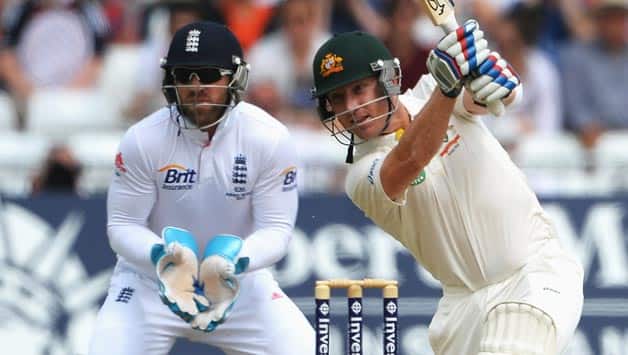 Australia relived the heartbreak of the Ashes 2005 Test played at Edgbaston, losing by 14 runs to bring down the curtains on a thriller.  In five days, the 2013 edition of the premier Test series of the game pooh-poohed naysayers of long form cricket, providing plenty by way of thrills and, er, controversies in a relentlessly see saw opening salvo at Trent Bridge, Nottingham.  Australia would only wish, though, they had finished on the right side of it.

As it was, Brad Haddin paid a rather steep price for a slight indiscretion, attempting to drive James Anderson through the covers and nicking it to Matt Prior who duly obliged.   A 65-run last wicket resistance was still just so near, yet so far for Australia.  Oh, but the very fact that they had decidedly given England the shivers.

For nobody on the English side (and not many Australians for that matter) gave Australia a chance before the series got underway and most bets were on whether or not England would secure a whitewash.  One Australian writer – I forget exactly who – even declared that surely at least one of the Tests would get rained out so 5-0 was out of the question.  So much for optimism!   While players on both sides appeared respectful of each other’s abilities (outwardly, at least), English commentators positively swelled with smug confidence in their bold prophecies.

While the whitewash prediction can live another day, England would have to work doubly hard to make it happen from hereon.   In spite of far too much ‘off field action’ back home, Australia fought tooth and nail and caught a slightly below par England on the wrong foot.  While England did not play too badly throughout the Test, they also did not bat or bowl like the world beating unit they aspire to be.

The Joe Root opening experiment failed and none of the top four scored a ton in either innings.  It was instead the supposed softie Ian Bell who steered England to a target that, in the end, proved just barely enough for victory.  Steven Finn and Stuart Broad didn’t make much of an impact with the ball either and had Anderson let them down on this fateful Sunday, England would most likely have departed Nottingham with a deficit.

And it was here that Australia’s bunch of promising young bowlers delivered.   Peter Siddle was tireless en route to eight wickets in the match while James Pattinson and Mitchell Starc were not far behind either.   Phil Hughes’s effort in the first innings as well as the 84-run opening stand between Shane Watson and Chris Rogers in the second would have gladdened Australian fans too.   Even if the Australian batting didn’t fire on all cylinders, for the first time in a long while, they dug deep and forced England to earn their wickets.

It is that never say die spirit that Australia can look to take back from an otherwise bitterly disappointing result.  For sometime, the famed Australian fighting spirit has been missing in their Test match efforts, particularly in away series.  While India were favourites in their home series earlier this year against Australia, the manner in which the tourists caved in again and again surely surprised many cricket watchers.   They seemed to be too impatient to offer strong resistance to the opposition, much less push them all the way.

But this first Test of Ashes 2013 suggests they have come a fair distance from the days when some members of the team were suspended for not doing their homework.  Whether the differences within the team that said incident highlighted remain, is anybody’s guess.  But on the face of it, they have at least shown the resolve to pull together as a unit on the field and make it incredibly hard for the opposition to topple the Baggy Green.

(Madan Mohan is a 27-year-old chartered accountant from Mumbai.   The writing bug bit him when he was eight and to date, he has not been cured of it.  He loves music, cricket, tennis and cinema and writing on cricket is like the icing on the cake.  He also writes a blog if he is not feeling too lazy at http://rothrocks.wordpress.com/)