The French poet, novelist and dramatist Victor Hugo bestowed upon the world an epochal quote when he remarked that "no one can stop an idea whose time has come". 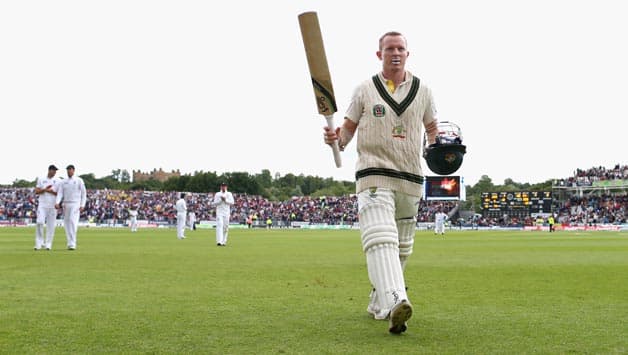 Chris Rogers acknowledging the cheers for his maiden Test hundred, which came after notching more than 20,000 First-Class runs © Getty Images

The French poet, novelist and dramatist Victor Hugo bestowed upon the world an epochal quote when he remarked that “no one can stop an idea whose time has come”.

On an intriguing second day of the fourth Ashes Test at the picturesque Emirates Durham International Cricket Ground in the staid town of Chester-le-Street, the time was preordained for an idea unraveled by a battling Australian southpaw, an idea the stirrings of which was felt a decade and a half ago when it was decreed to be still born and deemed appropriate for a nondescript burial.

When Chris Rogers came striding to the crease after a Jackson Bird master class on setting up a tail-ender-for-the-kill had flummoxed James Anderson, few could have had an inkling of the noble idea that was being formed, fermented and fostered in his mind. An idea that was in all probability even older and frayed than the uncouth arm guard which has now become synonymous with the left hander’s identity at the crease.

A concrete and tangible glimpse of the idea peeped out at the world in general and at the English in particular, when with a minimum of fuss and an even more minimal back-lift, Rogers began his inimitable and unpretentious negotiation of various variations of deliveries being hurled at him by an egregious unit of humankind boasting a fine pedigree of swing and spin. But Chris Rogers had an unwritten tripartite contract involving his body, mind and heart. A contract which required him to be sensible, yet not susceptible, stationary, yet not a saviour and sagacious, yet not serene. Rogers in executing his part of the bargain was delectably immaculate.

As Australia’s tormenter-in-chief, Stuart Broad ran rings around a trio of baffled batsmen before snaring them with the sympathy displayed by one eradicating an endangered species, Rogers stood as firm as an ancient relic, scarred by time but never surrendering to circumstances. With splayed legs and ungainly prods he pushed, nudged and pinched every run that was on offer. The occasional poking, fishing and lunging constituted mere aberrations. With the score at 34 for two, Rogers got a bizarre and confusing reprieve when after a successful appeal by England for a caught behind decision, he decided to seek the succour of the dreaded Decision Review System (DRS). While the replays clearly showed the ball missing the bat, they also revealed that Rogers could have been declared out leg before on the basis of the umpire’s call as the ball brushed the pad.

At a time when the modest score of 238 posted by England was being made to look like a total of ominous proportions, Rogers supplanted lingering doubts with an enduring idea. David Warner’s demise, Usman Khawaja’s departure and Michael Clarke’s doom were all episodes that were to be relegated to the periphery as minor and even unavoidable bumps in an otherwise smooth virtual highway.

The stray full tosses were still ripe for the plucking and the odd ball pitched at the legs were begging to be flicked away. When 49 for three read 76 for four, Rogers knew that his idea was in desperate need of an ally, a perpetrator in crime who could both understand and relate to its broad and ambitious contours. Enter the out-of-form Shane Watson, a temporary human euphemism for a terminal disease which was symbolically ravaging the Australian team from deep within — apparently.

With Watson, after a quiet bout of settling in, playing the relative role of an aggressor, Rogers meticulously donned the mantle of an accumulator. His courage was ably supported by the proverbial fortune when inside edges viewed the stumps as untouchables and the English slip cordon metamorphosed into Good Samaritans with Graeme Swann showing the road to be taken. An edge was grassed by the brilliant off-spinner and the idea now began to take a full bodied shape.

A mixture of sustained caution, substantial gumption and selective aggression brought Chris Rogers to 96. Just when the idea seemed to have reached the brink of its culmination, at the point of manifestation into a beautiful outline, it seemed to have lost momentum, direction and focus. Buffeted by the guile of Graeme Swann and the bracing against the banter of an extremely vocal Matt Prior, the idea slackened, swerved, and shuddered as Rogers spent an agonising 20 deliveries trying to calm his nerves and collect his bearing. The faithful accomplice in the form of Watson also departed for a crisp 66 that was punctuated by some strokes that could only be described as “Watsonesque”.

Finally a full-blooded sweep, uncharacteristic in its selection and ungainly in its execution saw the ball make blissful contact with the square leg boundary. Ninety six was history and 100 was the present. As Chris Rogers, without displaying even the faintest signs of euphoria or exultation, and with just a trace of smile adorning his lips smeared with zinc cream, calmly proceeded to lift his bat up, remove his helmet and acknowledge the rapturous applause of the crowd, colleagues and competitors alike, he knew that in achieving his maiden Test hundred after notching more than 20,000 First-Class runs, the time had finally arrived for his idea, an idea whose sweeping wake was too powerful to be stopped either by the contrivance of fate or by the machinations of an aggressive bunch of Englishmen.