Shane Watson, despite his unexceptional batting in this series, has, at a push, all the attributes — particularly vis-á-vis the game's peculiar lack of admiration for him — to be the heir to Jacques Kallis's mantle as the world's leading fast-bowling all-rounder. 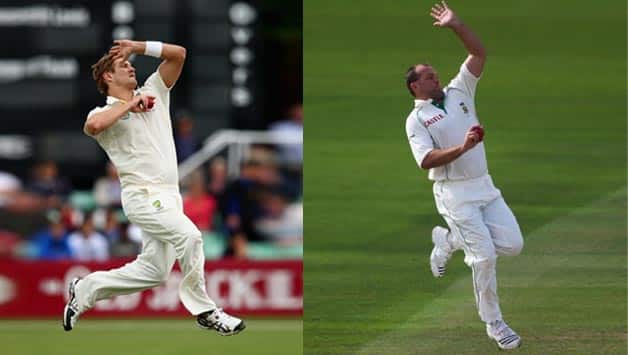 Shane Watson (left) and Jacques Kallis’s average and strike rate with the ball are broadly similar, but perception is everything © Getty Images

Shane Watson, despite his unexceptional batting in this series, has, at a push, all the attributes — particularly vis-á-vis the game’s peculiar lack of admiration for him — to be the heir to Jacques Kallis‘s mantle as the world’s leading fast-bowling all-rounder. With apologies to the superbly gristled Ryan Harris, there’s few, if any, cricketers bar those two who can lumber in like an articulated lorry whose brakes have failed on a mild downward incline and generate the sort of pace which can unsettle the likes of Kevin Pietersen. Watson and Pietersen had a bit of a chunter at each other in the early stages of the England genius’s innings of 113 in the third Ashes Test — if the clichés would be believed a clash of egos on a par with Nero versus Narcissus — but it soon subsided amid a mutual acceptance of worth, a situation probably aided by the plus 85mph bumpers that the hulking peroxide Han Solo sent whistling past Pietersen’s helmet.

Watson and Kallis’s average and strike rate with the ball are broadly similar, but perception is all. Watson has the pace, the line and the lift to discomfort even Pietersen, so why is it his bowling remains noted merely for its miserliness rather than its penetration? Perhaps Kallis’s ability to occasionally get enough swing to feature on The Great Gatsby soundtrack is a factor, but Watson himself relentlessly inhabits the corridor of uncertainty the way idiots inhabit a cinema for a Vin Diesel film. Somehow, however, this line just induces a kind of benign conservatism from the world’s batsmen rather than indecision and edges. It appears as if there’s been a tacit quid pro quo between the Queenslander and the opposition that the game will enter a netherworld of non-scoring and risklessness which even Geoffrey Boycott might consider mundane.

When Watson bowls full and straight this collective cynicism at his potential incisiveness seems to linger. He had Pietersen plumb on 62 before he went on to make 113 but Australia chose not to review Tony Hill’s verdict, a decision seemingly born of the general distrust of Watson’s bowling as a wicket-taking force, but perhaps more particularly from his own calamitous inability when batting to decipher that his front pad is often more adjacent to his stumps than Robert Mugabe is to global condemnation.

Nevertheless, regarding Watson as just appreciable is as much of a nonsense as it would be to regard Kallis as just a handy all-rounder. Only the Manchester weather, often even less reliable than DRS, knows if this latest slight on his abilities will prove fatal to Australia’s chances of reigniting their fires in this Ashes series.