After conceding the first two Tests in the ongoing Ashes series, Australia came out with a refreshingly positive intent and dominated the day’s play by ending on 303 for three. The day started with a confident-looking Chris Rogers going after the England attack and finished with one of the most valiant knocks from skipper Michael Clarke, with a bit of DRS drama in between. Prakash Govindasreenivasan discusses the talking points of the day. 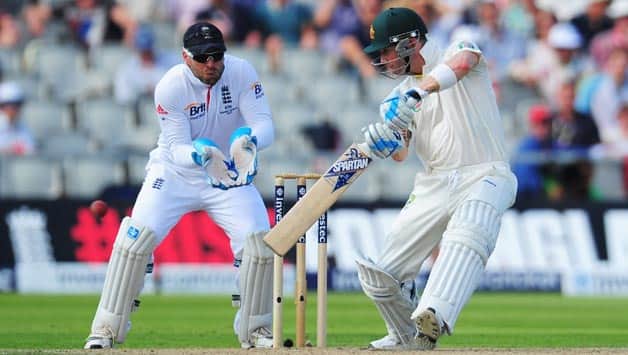 After conceding the first two Tests in the ongoing Ashes series, Australia came out with a refreshingly positive intent and dominated the day’s play by ending on 303 for three. The day started with a confident-looking Chris Rogers going after the England attack and finished with one of the most valiant knocks from skipper Michael Clarke, with a bit of DRS drama in between. Prakash Govindasreenivasan discusses the talking points of the day.

A good start for the dodgy visitors began right at the toss when Clarke won his first of the series and decided to bat. The wicket looked good to bat on but the pressure was on the Australian openers, Chris Rogers and Shane Watson. The duo responded brilliantly by putting on only their second 50-plus partnership in the series, with Rogers doing the bulk of the scoring. They played a few attacking strokes early on and unsettled the English bowlers. When Watson was dismissed in the 17th over, he and Rogers had already added 76 runs to the scoreboard.

After two back-to-back defeats, the Australian camp was sure to mull changes in a bid to arrest the slide and restrict the home side from taking away the Ashes in the third Test. In what came as a positive move, attacking batsman David Warner was picked at the back of a splendid knock of 193 against South Africa A in Pretoria. Many would have expected to see him at the top of the order, maybe even open the innings but from what has happened so far, it seems like he will come in later on at No 5 and be expected to essay the role of the aggressor that was portrayed effectively by Adam Gilchrist in the previous decade. One can expect some attacking strokeplay if he comes out on Day Two.

Opener Rogers took to the English bowlers and scored swiftly in the first session to nullify the impact of the new ball early on. He began to play his shots in the very first over when he came forward and guided a full delivery through gully for four. He did not let Anderson settle as he rotated the strike frequently and got the odd boundary when a loose delivery came along. He played some exquisite shots through the off-side and through midwicket on his way to less than a run-a-ball half-century. Rogers’s sense of timing and placement was inch-perfect. After scoring two boundaries off Tim Bresnan in the 15th over, he followed it by three in Anderson’s next. The third boundary of that over was his 10th of the innings and it brought up his fifty from 49 balls. Following Watson’s wicket, Rogers had to slow down a bit in order to lay the foundation for another big partnership. After adding 76 runs for the first wicket with Watson, he and Clarke put on a 47-run stand for the third wicket before he was dismissed by Swann. In an attempt to go after Swann, Rogers tried to play across the line and was trapped leg-before. He consulted with Clarke and decided to walk back without taking a review as it seemed pretty straightforward. He fell short of a century by 16 runs but he had laid a solid foundation with his fluent knock.

Usman Khawaja and the DRS howler

The Decision Review System (DRS) refuses to go out of the limelight as another poor judgement via the review took the sting out of what was turning into an intriguing day’s play. After Watson’s dismissal, left-handed Usman Khawaja walked out. Early on in his innings, he tried to prod at a delivery from Swann that was turning away from him and Matt Prior completed a catch behind the stumps. The Englishmen went up almost immediately and the umpire thought they had a reason to do so and ruled in their favour. Khawaja quickly walked towards his partner Rogers and his body language suggested that he was absolutely certain that his bat was nowhere near the ball.  He reviewed and the Hot Spot backed his sentiment as it was not conclusive that he had edged it. There was a definite sound when the ball passed the bat but it seemed like that of the bat brushing the pad on the way. After looking at a couple of replays, third umpire Kumar Dharmasena upheld the decision, much to everyone’s disbelief.

Skipper Michael Clarke walked out at No 4 with the score at 82 for two and converted a scratchy start into a magnificent century and finished unbeaten on 125 at the end of day’s play. Clarke, who enjoyed a glorious period in 2012 with the bat, wasn’t in form coming into the Test match. His perennial back injury had been a stumbling block for him in the recent past and it seemed as if his back was still stiff when he began his innings. However, he took the onus of rebuilding the Australian innings after Rogers provided a good foundation. After a brief period of nervous display of batting, he came into his elements and began to play his shots.

With Steven Smith for company, Clarke made the English bowlers pay on a day when things were not going their way. It was a captain’s knock from Clarke and there could not have been a better time for it to come. His unbeaten 125 has surely managed to generate some cheer among the Australian supporters who have had little respite in the series so far.

The best feature of Australia’s positive start to the third Test was their ability to finish it well at the end of the first day’s play. They lost three wickets but Clarke’s unbeaten 125 and a useful half-century from Steven Smith has ensured they finish the day on top.

This is probably the beauty of the rivalry between the two sides and the high stakes involved in a series as big as the Ashes. After a meek surrender at Lord’s, they have turned things around with a good display on the first day and have set the tone for four highly competitive days to follow. As for England, they would want to sleep over the below-par performance and start afresh on Day Two in a bid to bowl out the visitors as early as possible. Skipper Alastair Cook will expect his boys to forget the fact that they are two-nil up in the series and look to inspire them to walk out on Day Two and treat the game as a must-win encounter.

Can Clarke carry on and score another double ton? Or will Anderson & Co. trigger an early collapse and wrap up the innings inside the first session on Day Two? We will have to wait and watch.

Will Main Hoon Shahid Afridi be the Bhaag Milkha Bhaag for Pakistan?