The difference between the tails of England and Australia could prove decisive at Cardiff in the first Test.

England’s tail resembles that of a long and fluffy Maine Coon. Australia’s tail, on the other hand, looks a lot like a short and stumpy pug’s. With Moeen Ali coming in at No. 8 and the likes of Stuart Broad and Mark Wood in the mix, England have only one genuine tail-ender in James Anderson. Australia’s has the potential to be particularly tiresome, but somehow Mitchell Johnson and Mitchell Starc are more miss than hit as long as the opposition is not India, while Josh Hazlewood and Nathan Lyon cannot really be considered non-tail-enders. READ: Ashes 2015 1st Test at Cardiff: Australia must learn to thrive on flat decks

In England’s first innings, Moeen played an excellent hand to take his team from a middling 343 for 7 to a commanding 430. In contrast, Australia crashed from 262 for 6 to 308. The difference was telling. READ: The Moeen Ali conundrum

With England already 122 runs ahead, their batsmen perhaps got a tad complacent. Having reduced England to 240 for 7, Australia would have wanted to go in for the kill. Mark Wood then stepped up and played an entertaining cameo, giving the ball a fair whack to remain unbeaten on 32 off 18 with four boundaries and a six. READ: Australia’s ‘Dad’s Army’ leader Chris Rogers makes intention clear

Australia now have to score 412 to win the first Test of The Ashes 2015. The top order will undoubtedly be important, but in steep chases every batsman must be able to put their shoulders to the wheel. Even if the likes of David Warner and Steven Smith score hundreds and get out, the middle and lower-middle order will need to ensure that the top order is well supported. READ: Ashes 2015 no less than test of character for Clarke and Cook

Johnson and Starc have the ability to score useful runs at the end, but the manner in which they were dismissed in the first innings was a huge let-down for Australia: Johnson flicked one in the air to the fielder and Starc drove away from his body, edging to slip. READ: England wasting Joe Root at No. 5

Australia will hope their frontline batsmen are enough to pull off the chase, but in all likelihood the tail will have to make some contribution. Gone are the days when batting line-ups ended at No. 7; Johnson and co. will do well to take a leaf out of England’s book and show more heart with bat in hand. Complete Coverage: The Ashes 2015 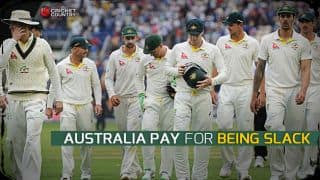 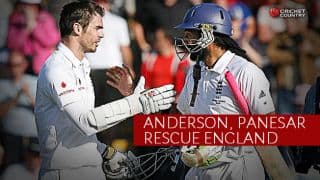