Amidst the abject surrender to England, Ravichandran Ashwin and Pragyan Ojha have achieved the unique feat of three consecutive twin bowling centuries. Arunabha Sengupta looks at records to find that this is a first by Indian spinners bowling at home. 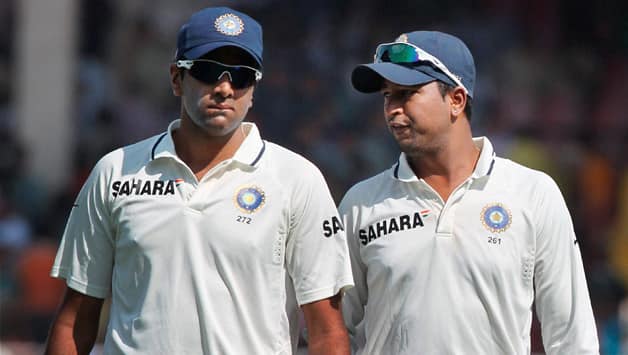 Amidst the abject surrender to England, Ravichandran Ashwin and Pragyan Ojha have achieved the unique feat of three consecutive twin bowling centuries. Arunabha Sengupta looks at records to find that this is a first by Indian spinners bowling at home.

In the midst of the despair of defeats, Ravichandran Ashwin and Pragyan Ojha have collaborated to etch their names in indelible, if somewhat dubious, characters in the glorious annals of Indian spin tradition. They have also set themselves up for an unbeatable record – provided they can carry on bowling in the same vein as they have done in the series till now.

This is the first time two Indian spinners have combined to notch up three pairs of bowling hundreds in successive Test matches at home in the 79-year history of Test cricket in India.

A pair of centuries against the name of spinners in the bowling analysis is not a rare feat as bowlers have often struggled against excellent visiting batsmen, or when wickets have not been that easy to obtain.

The first instance took place as far back as 1956 in Mumbai, when Jasu Patel, Vinoo Mankad and Subhash Gupte all registered hundreds while some tall scores were obtained by Neil Harvey, Jim Burke and Peter Burge.

Gupte and Mankad repeated the feat in 1959 against the rampaging John Holt, Joe Solomon and Collie Smith in Delhi.

Down the years, this has been repeated often enough – as many as 46 times. Various combinations of the famous spin quartet of the sixties and seventies have achieved it, followed by the likes of Shivlal Yadav and Dilip Doshi, Maninder Singh with Ravi Shastri and others. Anil Kumble and Harbhajan Singh, too, did it in on as many as 10 occasions, but generally they did have plenty to show in the wickets column for their efforts. Besides, never had the dubious twin tons been made with this amazing regularity.

Ashwin and Ojha have collaborated in five pairs of centuries in home Tests so far, the earlier twin hundreds coming against West Indies last year at Kolkata and Mumbai.

Hat-trick of twin centuries by Ashwin and Ojha


If the current spin twins can carry on their ‘good’ work in the remaining Test, they will create the unbeatable record of bowling centuries in every match of a series.

With five such dubious effort in the eight Tests they have bowled together at home so far, the two seem well and truly on the way to the landmark.

Given below is the list of all the twin centuries achieved by Indian spinners at home:


(Arunabha Sengupta is a cricket historian and Chief Cricket Writer at CricketCountry. He writes about the history and the romance of the game, punctuated often by opinions about modern day cricket, while his post-graduate degree in statistics peeps through in occasional analytical pieces. The author of three novels, he can be followed on Twitter at http://twitter.com/senantix)

Pakistan to convince Haroon Lorgat to be consultant for PPL

Boy beaten to death by cricketers for poking fun