In a must-win league encounter of the Asia Cup at Sharjah on April 9, 1995 Sachin Tendulkar scored an attacking hundred against Sri Lanka to bolster India s net run-rate at Sharjah and improve their chances of reaching the final. Sarang Bhalerao revisits Tendulkar s swashbuckling hundred. 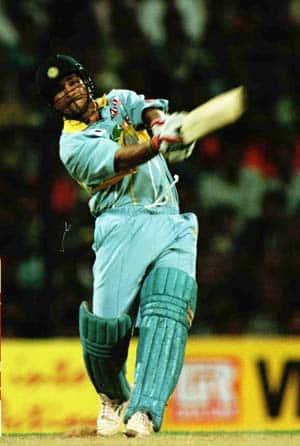 In a must-win league encounter of the Asia Cup at Sharjah on April 9, 1995 Sachin Tendulkar scored an attacking hundred against Sri Lanka to bolster India s net run-rate at Sharjah and improve their chances of reaching the final. Sarang Bhalerao revisits Tendulkar s swashbuckling hundred.

Champions have remarkable ways to respond to challenges. The greater the degree of difficulty before them, the more spectacular is their response. Sachin Tendulkar is a living example in the world of sport in a fairytale career spanning well over two decades. April 9, 1995 was one such day, after Sri Lanka labored to 202 for nine in 50 overs.

By the time Tendulkar took strike, the wicket had eased out or Tendulkar made us believe so. His first boundary was a graceful straight drive off Janak Gamage. In the next over Tendulkar meted out the same treatment to Chaminda Vaas, who was working up decent pace. The off-drive from Tendulkar, hit on the up, rocketed off to the boundary. Vaas continued to bowl just a tad outside Tendulkar s off-stump but the 21-year-old Indian sensation kept hitting the ball in the ‘V .

Gamage was made to look pedestrian. His length delivery was pulled towards mid-wicket for a couple of runs and then a similar delivery was caressed past covers for a boundary. Tendulkar, so far, was unruffled by the Sri Lankan bowling. Sri Lankan captain Arjuna Ranatunga employed a sweeper-cover to cut Tendulkar s boundary spree. The Indian made mockery of Vaas by smashing him straight down the ground. Ranatunga looked out of ideas. The allocated set of fielders as per playing condition was inadequate to stop Tendulkar.

Vaas changed his angle and came round-the-wicket to Tendulkar, who immediately used his supple wrists to hit the ball behind square-leg for a couple of runs. Vaas then bowled his usual line of attack (over the wicket) and Tendulkar employed a lofted shot which eluded the mid-on fielder. This was Tendulkar s first lofted shot of the innings. He was on 49, unperturbed by the challenge presented in front of him.

Champaka Ramanayake, Kumar Dharmasena, Sanath Jayasuriya and Aravinda de Silva all bowled in turns, but the Tendulkar-Prabhakar alliance was running away with the game. At the half way stage India were comfortably placed at 143 without any loss.

Tendulkar was dictating terms. He danced down the track and carted Jayasuriya for a straight six and swept the bowler past short fine-leg for another boundary. Tendulkar then savaged Vaas. Dabbing the ball towards point, Tendulkar hoisted his fourth hundred in One Day International (ODI) hundred as Ranatunga joined the crowd in appreciating the knock.

Tendulkar, who became the eighth Indian to score 3000 ODI runs, then pulled Vaas towards mid-wicket quite nonchalantly and finished the over with a vintage drive that pierced the off-side field. Vaas went for 18, as India motored along their target.

With the scores level, Tendulkar pulled Ramanayake towards long-leg for a boundary. Tendulkar s 107-ball essay produced 112 runs glittered by 15 boundaries and a six. India had won by eight wickets, with 100 balls to spare. That was a resounding win.

India s net run-rate was 4.85, behind Pakistan (5.22) and Sri Lanka (4.35) were third in the table. The feature of Tendulkar s batting were his carpet drives. Sri Lanka kept wondering what they could have done to arrest the flow of runs. But with Tendulkar in red hot form they could only one thing appreciate the genius.