While Atharva is earning quite a few plaudits for his match-winning performance in the Under-19 Asia Cup final, the journey to this point was not a cakewalk for the Ankolekars.

On Saturday, Vaidehi Ankolekar had to cut her trip short and rush back from duty to watch her son Atharva play in the final of the Under-19 Asia Cup. She could reach on time but India being bowled out for 106 in under 33 overs did not do much good to her mood. However, the tide was about to turn even as Bangladesh made India work for the last two wickets.

“Pahila tar vaatala navhtaa jinknaar mhanun. Pan jashee tyaachee bowling aalee, wickets gelyaa, tar jaraa hope aalelaa. (I did not feel that we could win. But as he started to bowl and India started taking wickets, there was some hope). However, it was not too clear as the last two wickets did not fall quickly,” Vaidehi tells CricketCountry after her son Atharva‘s five-wicket haul helped India Under-19 win their seventh Asia Cup title in Sri Lanka, beating Bangladesh by five runs.

Her son is earning plaudits for his match-winning performance in the final of the Under-19 Asia Cup – a tournament where he was the leading wicket-taker (12). But the journey so far has not been a cakewalk for the Ankolekars. Vinod Ankolekar Atharva’s father used to work with the Brihanmumbai Electricity Supply and Transport (BEST) as a conductor and played in the Kanga League. He lost his battle with malaria and passed away in 2010.

ALSO READ: Atharva Ankolekar: All you need to know about India’s hero at the U19 Asia Cup

Although Vaidehi, who took up her husband’s job in the BEST, says she does not understand much about the game, she did not stop Atharva or his younger brother, Parth, also a part of Mumbai’s Under-14 set-up, from pursuing their cricketing dream.

Quizzed if she faced any troubles and pat comes the reply. “Malaa jaasta kaahee cricketacha kalat naahee (I don’t know much about the game). He worked really hard and had his share of struggles. Mee khara tar tasa kaahee vishesh kela naahee pan tyaalaa kaahee kamee padu dila naahee. (To be honest, I did not really do anything special. (I) just saw to it that he gets what he needed). (I) Did not put any pressure on him, just gave him the freedom to do whatever he wanted. Pan pappancha swapnaa purna karaayche hey tyaanee thravala hota (But he had decided to fulfil his father’s dream),” Vaidehi says.

While she is happy with Atharva’s performance and deserves credit for his success, she does not forget highlighting how his school and college supported him as he followed his dream.

In pics, Under-19 Asia Cup Final: India Under 19 vs Bangladesh Under-19

“His school and college (Rizvi College of Arts, Science and Commerce) have a lot to do with this. They always stood behind him and supported him. I spoke with his teachers and they said that this is just a start for Atharva. He will go far. He has to play for India, in the IPL. His coach (at Parle Tilak Vidyalaya) Suren Ayre, his coach at MIG Prashant Shetty sir, who is currently in Sri Lanka, also messaged. Aru Pai sir helped us a lot. He used to take Atharva to his home in the afternoons, making sure he has his lunch, and then used to take him back to the ground for the training,” she concludes.

India U-19 beat Bangladesh U-19 by five runs to claim their record seventh U-19 Asia Cup title with Ankolekar returning 5/28. 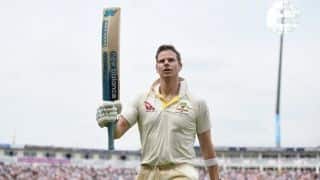