Atul Wassan: The workhorse who never got the run he deserved

Atul Wassan: The workhorse who never got the run he deserved

Atul Wassan was one of the seamers India had used between the fading out of Roger Binny and Madan Lal, and the arrival of Javagal Srinath.

Atul Wassan was born March 23, 1968. Abhishek Mukherjee looks at a hard-working medium-pace bowler who probably did not get as many chances as he deserved.

Atul Satish Wassan was one of the seamers India had used between the fading out of Roger Binny and Madan Lal, and the arrival of Javagal Srinath. Chetan Sharma did a good job for some time, but there was not anyone who lasted long enough to back up Kapil Dev and Manoj Prabhakar, especially overseas.

Wassan was certainly not the fastest of bowlers, but did make up for it with his tireless determination as he sent down over after over, especially at domestic level with unerring accuracy. On his day he could keep any opposition down and prove to be the perfect foil to the two new-ball bowlers.

Wassan’s limited exposure to international cricket has been baffling. For someone with a bowling average of 25.72 and an economy rate of 3.98, Wassan should definitely have played more than 9 ODIs. If we put a 10-wicket cap he ranks second among Indians in terms of both average and economy rate. He also played 4 Tests with relatively ordinary numbers of 10 wickets at 50.40.

Born and brought up in Delhi, Wassan represented Delhi at both school and university levels. He made his First-Class debut a couple of days short of his 19th birthday in the 1986-87 Ranji Trophy final. Coming on first-change in each innings he picked up a solitary wicket as Hyderabad clinched the title.

Delhi won the Ranji Trophy the next season but Wassan was not picked for the final. He got to play the Irani Trophy and played a crucial role in Delhi’s victory with five wickets in the match. In his next match, against Services, he had 5 for 59 and 5 for 66: his first five- and ten-fors.

Thrust into alien conditions, Wassan coped well: he managed a single wicket in the first match against Otago, but he jolted them with a short burst with the new ball in the second. Ben Harris, Kevin Burns, and Ken Rutherford were all back in the pavilion with 10 on the board, and Wassan finished with 3 for 25. He was selected for the first Test at Lancaster Park.

Wassan came on first-change and watched the hosts pile up 459. He bowled Mark Greatbatch and finished with a single wicket for 95. India were bowled out for 164 and 296 (Navjot Sidhu did not bat in the second innings due to a wrist injury and was ruled out of the tour) and lost by ten wickets. Coming out at 255 for 7 in the second innings Wassan remained unbeaten on 24.

The second Test at Napier was a rain-washed affair: it was not till the fourth morning that Mohammad Azharuddin could declare the innings closed on 358 for 9, and rain washed out the fifth day as well. New Zealand scored 178 for one before the rain came. Wassan had the wicket of Trevor Franklin, the only batsman to be dismissed.

Azharuddin won the toss and put the hosts in at Eden Park, and Kapil, Prabhakar, and Wassan bowled beautifully under humid conditions. Wassan, the wrecker-in-chief, removed Franklin, Greatbatch, Martin Crowe, and Rutherford, reducing the hosts to 85 for 6. Shane Thomson fell with the score on 131, which brought Ian Smith to the crease.

It was perhaps Smith’s savage attack that brought Wassan’s career to a premature end. He scored 173 in 136 balls in what was definitely one of the most brutal displays of batsmanship in history. He took 24 runs off a Wassan over (2, 4, 4, 2, 6, 6), equalling the then world record of most runs scored in an over by a batsman (Brian Lara and George Bailey currently hold the record with 28 each).

New Zealand reached 391, and despite the assault Wassan’s figures read 16.4-1-108-4: not the most economic, but a wicket every 25 balls was a decent show. Azharuddin then responded with a characteristically sublime 259-ball 192. Wassan walked out at 396 for 8 and went after them straightaway; he eventually scored a 58-ball 53 with 7 fours, dominating an 88-run partnership with Azhar.

Wassan removed Greatbatch again and finished with one for 80 as New Zealand set India an improbable 393. India finished on 149 without loss. The Indians had done abysmally with the ball, but Wassan had emerged as the highest wicket-taker with 7 wickets.

He made his List A debut in the Rothmans Cup Triangular Series on the same tour and was easily the most successful Indian bowler: he conceded 45 runs from 10 overs with the wickets of John Wright, Andrew Jones (for a golden duck), and by-now-his-bunny. He ended up dismissing Greatbatch 5 times in 5 matches across formats.

India did not reach the final of the tournament, but Wassan did not embarrass himself: with 6 wickets from 4 matches at 27.80 he had managed to impress everyone.

An English tour, and then back home

Wassan made it to the tour of England in 1990. He was 12th man for the second Test at Old Trafford, where Sachin Tendulkar made his maiden Test hundred (a fact he proudly remembers). He impressed the think-tank with figures of 6 for 89 against Glamorgan, and was selected for the Test at The Oval that week.

Azhar declared at 606 for 9 before England reached 92 for 1. It was then that Prabhakar and Wassan jolted the hosts, reducing them to 139 for 5; Wassan trapped David Gower leg-before and had John Morris caught-behind. Some excellent bowling from Prabhakar helped India bowl out England for 340.

Azhar enforced the follow-on, but eighties from Graham Gooch and Mike Atherton and a hundred from Gower saved the Test for them. Wassan removed Morris again, but England saved the Test and clinched the series. Strangely, just when he was beginning to look good, Wassan’s Test career came to an abrupt end.

Wassan played 5 more ODIs on his return, four of which were against Sri Lanka (yes, India used to play them frequently even then as well); he returned figures of 10-0-28-3 in the Asia Cup match against Sri Lanka at Cuttack, but played only one other match — the final at Eden Gardens. He never played for India again.

Wassan kept on playing domestic cricket till 1997-98. He also played Minor Counties League Cricket and often turned up for World XIs. He shared accommodation with a teenaged Tendulkar those days under the agreement that the fast bowler would cook, while the youngster would have to do the cleaning-up. He was also a common name in the Hong Kong Super Sixes.

In the 1991-92 Ranji Trophy quarterfinal against Bengal he had a partnership with Vivek Razdan, adding 130 for the ninth wicket before Razdan fell for 101. Still not content, he smashed his way to a career-best 110, adding 61 for the last wicket with Vemulapally Arvind: Delhi won by an innings.

Two seasons later he (then captain of Delhi) scored an unbeaten 104 against Haryana at Kotla, and opening batting in a Ranji Trophy List A match against Services he top-scored with 106 — his only List A hundred. His form never really waned, and between 1993-94 and 1996-97, Wassan had 127 First-Class wickets at an impressive 24.38.

However, he hung his boots up after a solitary match in 1997-98 — against Haryana: the spearhead of an ensemble attack that consisted of Ashish Nehra, Robin Singh Jr, Nikhil Chopra, and Rahul Sanghvi, Wassan finished with 2 for 55 and 1 for 61 before calling it quits.

He did continue to participate in the Hong Kong Super Sixes, and as late as in 2010-11, he turned up for India Masters in the Cricket Legends of Barbados Cup. However, he did not play competitive cricket anymore.

Wassan went on to become a popular commentator after his retirement, and was also appointed the Chairman of Selectors for the Delhi Ranji Trophy side. He got married to his teenage romance Sonu in his earlier days, and she has stood by him ever since. In an interview to The Telegraph, Wassan had called the wedding “the best decision I’ve made in my life.” The Wassans have two children, Aayushmaan and Aavantikaa.

Wassan had also set up a business of mobile phone accessories. He made it to the headlines in July 2011 when he was allegedly assaulted at a Delhi-Gurgaon toll plaza by the bodyguards of a Minister: he had tried to overtake the Minster’s car. The incident had caused a great amount of stir in the media. 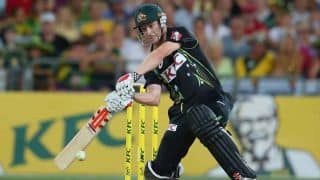