In the 'Simon Katich camp’ you have those that would happily get to grips with Pup’s neck over a song. Rumours that that altercation was due to Clarke skipping tracks past Aqua’s Barbie Girl, a Katich favourite, are unfounded. 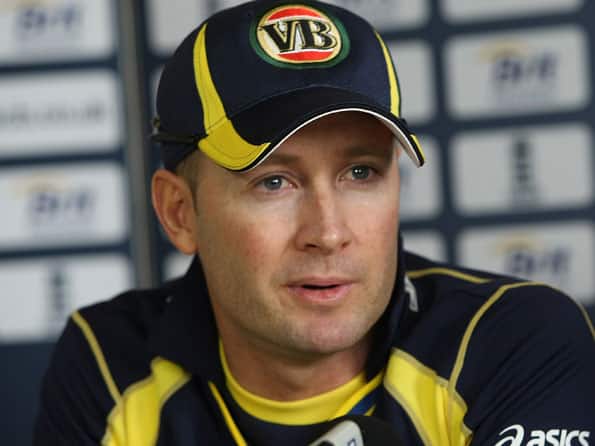 In the ‘Simon Katich camp’ you have those that would happily get to grips with Pup’s neck over a song. Rumours that that altercation was due to Clarke skipping tracks past Aqua’s Barbie Girl, a Katich favourite, are unfounded.

In the other corner you have those that can look past the tattoos, the earring, the model girlfriend, the horse at the wedding etc and realise that we actually have a bloody good cricketer in our midst.

I was as delighted as everyone else to see Australia’s Test dominance come to an end, culminating in Michael Beer getting a Test cap after the dropping of Xavier Doherty – possibly one of the best “yep, we’re shit” acknowledgments seen since the West Indies included Floyd Reifer and Rawl Lewis in the same side. From the start, it was clear that Michael Clarke meant business. Even if that business included wrongly spelled Arabic tattoos.

However, out of the shadow cast by Ricky Ponting’s considerable head, has come a new Michael Clarke.

His ascension to the national captaincy and the upturn in his batting provided plenty of cliché ammunition for lazy journos such as ‘Pup Becomes a Dog’ etc. But for those of us not paid to write, let alone not paid to write utter drivel, Clarke playing cricket at the next level is a begrudging joy to watch. His 151 in South Africa (which was followed by the 47 all out was an innings that combined delicate strokeplay with a bloody-mindedness to see off an otherwise bloodthirsty and irresistible trio of Dale Steyn, Morne Morkel and Vernon Philander.

His captaincy has come in for praise too, though that is not difficult when you take over from a man as tactically astute as a sheep. Bringing Michael Hussey on for one over to dismiss a set Kumar Sangakkara on the first day in Pallekele was galling as a Sanga fanboy but utterly beautiful as an example of partnership breaking and finding a way back into a game.

It is surprising to realise that Michael Clarke is already 31 years old. Was it really that long ago we first set eyes on a kid with a stupid haircut and singled him out for long lasting ridicule? He himself has stated that he perhaps only has a handful of years left in him, before he of course hands over the captaincy in all forms to the man, the mystery Steven Smith and calls it quits in the international arena.

As much as we want to see him burst into tears at a post-match press conference, or getting roundhouse kicked in the face by Jesse Ryder as New Zealand bat out a draw, in all likeliness we will have to face facts, sit back and watch a bloody talented cricketer make the mark on the modern game he has been promising to do for some time.

(The above article is written by Half-Tracker, a student who can’t play cricket to save his life, so he spends way too much time watching and writing about cricket, Hampshire Cricket in particular. The article is reproduced with permission from AlternativeCricket.com. AlternativeCricket is currently developing a scholarship for young Afghan cricketers. You can follow them on Facebook (facebook.com/alternativecricket) and Twitter (twitter.com/altcricket)