Australia Under-19 was outplayed by Afghanistan Under-19 in the group stage.

Former England cricketer, Graeme Hick has now moved all the way to Australia to don the hat of coaching and mentoring role. One of the most prolific batsmen in county cricket, Hick now is a High Performance Coach in Australia and is currently in charge of their side at the ICC Under-19 World Cup 2014. In an exclusive chat with CricketCountry, Hick talks about his move to Australia, his approach to coaching youngsters and much more.

CricketCountry (CC): Having played for so long, how difficult was your transition into a coaching role?

Graeme Hick (GH): I had retired nearly five years ago, so the playing side was well out of my system. I started doing a bit of coaching at the national centre. I sort of slowly got into the role. I am fortunate to be given this job of looking after the Under-19s and helping out at the [High Performance] Centre.

CC: But, how did the move to Australia come about? Moving all the way from England…

GH: As a family, we thought we wanted to make a lifestyle change. We have been very fortunate over the years to travel all around world. We also spent six months in Brisbane in 1991. We decided we wanted to try something different, so we packed out bags and moved to Australia.

CC: In your younger days, you moved from Zimbabwe to England. That could have helped you adjust here as well…

GH: Yes, I suppose. I’ve got a wife and two kids — who are 18 and 21 now. No problems in moving young kids and we are lucky they have settled down very well. It was tough emotionally, as my wife left her family in England. But, they’ve been to Australia a few times, and enjoyed their visits.

CC: And now travelling has become a part of modern day cricket coaching…

GH: Yes. There are coaches who have coached national teams other than their own. That has changed and the game is also moving forward especially, since the advent of Twenty20 [T20] cricket. Every game develops and moves on. The boundaries are there to be challenged and players always challenge them.

CC: How difficult is it for you as you can only watch when the game goes on instead of being involved in the action in the middle?

GH: It is different. Especially when they are batting, they are 19-year-olds, and you feel they are going a bit hard or should be playing a bit safer or taking different options. You’d like to think that if you were out there, you’d be doing those. But, I am sure as a 19-year-old kid, I also made mistakes. It is a good age for them to learn and the quicker they learn from mistakes, the better it is.

CC: How much of your role is about being a mentor?

GH: Yes, very much so. I met them really for the first time at the airport. It is a new role for me as well. It would be unfair of me to come in, having not seen them play that much, to try and change things. So, we’ve just tried to provide a good environment and a happy dressing room for them to play their cricket, so that they express themselves. Along the way, throw questions at them, so that they can think for themselves and see whether they are making the right or wrong decision.

CC: Australia suffered a setback by losing to Australia, but since then this team has gelled well. What did you as a coach to turn things around?

GH: We played okay in the first game. Afghanistan outplayed us that day. To be honest, I didn’t have to say much to the group. They realised they had messed up, they didn’t play the game they were capable of. They were disappointed of themselves and they didn’t need much to get up for the next challenge. They put in a good performance against Bangladesh that got them through. That was a crucial win for us.

CC: Are you happy with the quarter-final victory? West Indies were 70 for eight and then Nicolas Pooran took it all the way to 208.

GH: Of course, I am very happy with the performance. It was one of the best innings you’ll see in Under-19 cricket. He was very composed at the crease, his shot selection and to bat through right till the end was a tremendous effort on his part. Obviously, you feel a little bit frustrated that you let them get 200. But, seldom do you actually run through a team and bowl them out, especially a quality team like the West Indies. There is always a partnership somewhere. I would have been disappointed had we given them a couple of lives, dropped chances etc. But, he played beautifully and sometimes you’ve got to accept that. We were fortunate that they got about 200 and on that wicket, we were confident that as long as we didn’t get bowled out, we’d chase that down. 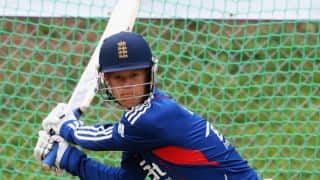