Justin Langer added 51 while Matthew Hayden had remained scoreless at the other end!

November 26, 2001. Following the spectacular finale at Brisbane and a quick detour of Adelaide, the teams moved to Hobart for the second Test. New Zealand handed a Test cap to a 26-year-old Christchurch policeman, who would emerge as one of the finest yet unfortunate fast bowlers in the history of the nation. Shane Bond’s debut, however, will be remembered for a bizarre opening stand between Justin Langer and Matthew Hayden. Abhishek Mukherjee looks back at a remarkable day in a rain-washed drawn affair at Bellerive Oval.

Everything was going to be anticlimax after the maniacal last day of the first Test at Brisbane. While there was no doubt that Australia were the better of the two sides, New Zealand’s spirit was hailed by all and sundry.

Unfortunately, two of New Zealand’s new-ball bowlers, Shayne O’Connor and Dion Nash, had headed back home with injuries. While the tourists had Daryl Tuffey and Chris Martin to support Chris Cairns, they summoned a young policeman called Shane Bond as reinforcement.

All three fast bowlers played in the tour match against South Australia. New Zealand were set 196 despite solid performances from Greg Blewett and Darren Lehmann. However, on a turning track (Daniel Vettori took 9 for 140 in the match) New Zealand were bowled out for 178 in the fourth innings by the leg-breaks of Peter McIntyre.

There were, however, a silver lining for the tourists amidst the gloom of defeat: despite the fact that conditions were not in their favour, Tuffey had match figures of 4 for 91 while Bond had 3 for 78. In the second innings Bond was given first over: he responded with a wicket in the first ball of the innings, and another in his fifth over, both bowled.

Despite his excellent performances at the top, there was no doubt that Justin Langer was the more sedate of Australia’s newfound opening pair, while Matthew Hayden was the generally accepted destroyer.

Once again Stephen Fleming put Australia in, and held Bond back as Cairns and Tuffey shared new ball.

Langer did not take time, unleashing his trademark extra-cover drive in the second over. JL fans of can probably visualise the shot with eyes closed: the front foot reached the pitch of the ball; for a second it seemed the bat would not make it, or even if it did, Langer would snick it; then the bat came down, the wrist coming into action at the last moment, converting a caress into a resounding thump.

Langer was 7 when Hayden got his first run. Then, in Cairns’ third over, Langer’s short-arm pull made it to the fence. Cairns pitched up the next ball, and Langer responded with a fluent cover-drive for four. A fuming Cairns bounced three balls later: Langer hooked him behind square for four.

Australia raced along, reaching 31 after 6 overs. Langer had 27 of these.

Two overs later he went after Tuffey: the first ball was a fortunate escape through a vacant gully; the fourth and fifth sped to the cover fence. They ran a single, and Langer dispatched Cairns through cover first ball.

Fleming summoned his youngster. Cairns was quick, but there was no doubt that Bond was quicker. Over time Bond would emerge as the finest New Zealand fast bowler since Richard Hadlee, but on this day he was more erratic than he would have wanted to be.

Bond’s second ball was quick and slightly short, a shade outside off. Langer was on to it in a flash. It was not the kind of ball most would have pulled, but Langer did, to the mid-wicket fence. Young Bond did not have the greatest of welcomes.

His fifty came up three balls later, with a single to square-leg. It had taken him 49 balls. Hayden walked up to shake his hand. Not every day do you reach fifty, leaving your partner stranded on a solitary run!

He kept going, driving Cairns for four and taking those ones and twos. He eventually reached 57, which meant that he had added fifty while Hayden had remained scoreless at the other end!

He ran a single next ball. Then, after watching Langer add 51 at the other end, Hayden got his second run. Curiously, he had remained scoreless for a mere 12 balls, which was certainly not unexpected of an opener at the beginning of his innings.

Once the spell was broken, however, Hayden cut loose in an attempt to make up for lost time. By the time Langer holed out to Vettori at cover off Cairns for 123, Hayden had raced to 85, which meant he had scored 84 to Langer’s 65 during the phase.

Three times in three innings had Langer scored a hundred as opener.

Hayden, too, got to 91, but Ricky Ponting stole the show with 157 not out. There was a collapse eerily similar to Brisbane, where Australia were reduced to 263 for 6 after they Langer and Hayden had put on  224. They added 223 here before Australia slipped to 267 for 5, Vettori taking 3 of the wickets. Bond got his first Test wicket when he trapped Steve Waugh leg-before.

This time Ricky Ponting stepped up with an unbeaten 157, adding 69 with Adam Gilchrist, 145 with Shane Warne, and 77 with Brett Lee. Waugh declared at 558 for 8 as soon as Lee fell (he became Vettori’s fifth wicket).

New Zealand had a stop-start response due to rain, eventually finishing on 243 for 7 after being 100 for 4. Having played two Tests without a result, the teams travelled cross-country to Perth for a fitting climax. 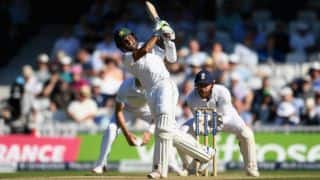