Australia vs New Zealand 2015 series shows DRS is not faulty; the need is for efficient operators and interpreters

Australia vs New Zealand 2015 series shows DRS is not faulty; the need is for efficient operators and inte

The first pink ball Test left many pink faces around — some in anger and some in embarrassment.

Day Two of the historic first-ever day-night Test at Adelaide Oval, and New Zealand had turned the tables on Australia to dominate proceedings. Debutant Mitchell Santner, bowling the 54th over of Australia’s first innings, got Nathan Lyon to sweep one. The ball took a feather-edge on its way to slip. Umpire S Ravi did not think so, but a confident Brendon McCullum reviewed it. When the Hot Spot showed a nick, even Lyon himself started walking. He knew it was out, as did the Black Caps and the millions around the world watching. Everyone, that is, but the man who mattered; third umpire Nigel Llong ruled it not out. That changed the course of the game to Australia’s favour. FULL CRICKET SCORECARD: Australia vs New Zealand, 3rd Test at Adelaide

The first pink ball Test left many pink faces around — some in anger and some in embarrassment. The decision sparked off an unneeded controversy with the cricket fraternity criticising the Decision Review System (DRS). Ian Chappell, Matthew Hayden, Shane Warne, Scott Styris, Ravichandran Ashwin, and many others expressed their disappointment at the decision.

Enough evidence? Lyon walks off as soon as he sees the mark on the back of the bat #AUSvNZ #WWOS pic.twitter.com/ruOi3rDKGA

Warne said on Twitter, “Horrible five minutes of cricket and a terrible decision by 3rd Umpire Nigel Llong, clearly Lyon was out and not to mention the fact Lyon walked off!” Warne was bang-on; the question here is whether Test cricket can afford to further slow down. And even if it does, is it worth it if there is a wrong decision taken at the end of it?

The dreaded index finger of the umpire was one of the charms of the game. A loud ferocious appeal from the bowler and the batsman having his heart in the mouth watching the umpire as if it was death knell has now made way for the frequent ‘T’ signs. That has further slowed the game, but if the change is for the better one should accept it. DRS has definitely added another dimension of excitement to cricket: suspense. With DRS the percentage of correct decisions have gone up and it must stay

The Board of Control for Cricket in India (BCCI) for long has opposed the use of DRS and many from the BCCI’s school of thoughts have now jumped with their sharpened knives on how the board was right to oppose it long back. But that is not the case.

DRS should stay: Back in the early 2000s, we did not wait for a mobile with 4G technology to launch before grabbing the then-smart Nokia 6600. We moved on from steam engines to a super fast Rajdhani Express, not waiting to only switch when a super fast 500kmph train arrives.

Technology will always evolve and it makes sense for teams to accept it as it is and that is the same with DRS. Reason being, the accuracy of decisions have improved significantly. During the Ashes in 2013, ICC CEO Dave Richardson laid emphasis on figures stating that the use of DRS had helped correct decisions by 5.5 per cent.

Technology will always get better and to wait for the fool proof solution does not make enough sense. Earlier this year, India would probably have won the Galle Test against Sri Lanka had they had the option of DRS. Post India’s defeat at Galle, former Sri Lankan captain Mahela Jayawardene had written in his Times of India column, “I sympathise with some of the BCCI’s concerns about the accuracy of DRS, especially ball-tracking, but on balance, the use of the system has clearly reduced umpiring errors and improved the game. India would have won had DRS been used in Galle.”

Current scenario: The technology is available and it must be used to ensure maximum correct decisions while not consuming too much time. The rules too have made it a gamble and in the first Test between Australia and New Zealand at Brisbane, we saw Brendon McCullum unable to challenge a decision from umpire Llong as his side had already used their two reviews. McCullum, who was batting brilliantly on 80, had to walk back. FULL CRICKET UPDATES: Australia vs New Zealand, 3rd Test at Adelaide, Day 2

Technology cannot be relied on to make decisions, and ICC should allow umpires to sometimes take a subjective call. Having done so they must also ensure the men making decisions are efficient enough.

Coming back to Nathan Lyon’s controversial decision, when umpire Llong asked for the ball-tracking, a wrong footage was displayed of the batsman. It was from a different ball. In the recent times, it is not the first instance this happened. Something similar happened during the Mohali Test too when a no-ball denied Ravindra Jadeja AB de Villiers’ wicket.

These instances are quite bizarre in today’s world when everything is available at the press of a button. These goofs are unpardonable. Lyon’s decision has once again sparked off a debate with most from the cricket world signalling the ‘T.’ Yes, time to review the system (not the technology) and also the ones operating and interpreting it.

Ashwin got it bang on when he tweeted, “Do we need more to show that Nathan Lyon actually top edged that. Using technology is one thing, while interpreting ‘it’ is another.” 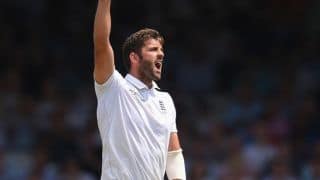