Let us take a look at how the players from both Australia and Pakistan performed in the five-match series, starting with the winning side:

Australia ended the summer with a comprehensive 57-run victory over Pakistan in the final ODI at Adelaide Oval, bolstered by a record stand from David Warner and Travis Head for the first wicket. Warner and Head added 284 runs, which is now the second highest opening stand in ODI cricket and Australia s best for any wicket. Warner scored 179, whereas Head contributed with 128, which was also his maiden century in ODIs. Warner was adjudged the Man of the Match for the final ODI as well as the Man of the Series, having scored 367 runs throughout the series.

In retrospect, Australia played quality cricket throughout the series, of course, barring the second ODI, in which they exhibited an ordinary show with the bat; and a spilled catch from their captain resulted in a 6-wicket defeat. Australia began with a 92-run win at Brisbane. After the setback at Melbourne, they won by the third ODI 6 wickets and the fourth by 86 runs.

Sharjeel Khan finished with 250 runs and Babar Azam with 282. Hasan Ali, however, claimed a five-for and took his wicket tally to 12.

Let us take a look at how the players from both Australia and Pakistan performed in the five-match series, starting with the winning side:

David Warner (9.5/10): The run-machine had an ordinary start to the ODI series with scores of 7 and 16 in the first two games. But Warner bounced back with a rapid 38-ball 35 with 5 boundaries, at Melbourne. He returned to Sydney, hammering his 12th ODI century and first of the series against Pakistan, despite the innings being slower than his hundred in the New Year’s Test at the Sydney Cricket Ground (SCG). Warner ended the summer with a career-best 179, setting up himself well for the road ahead. Warner scored 367 runs at 73.40, with two centuries.

Travis Head (8/10): His 128 in the final ODI pushed his overall tally to 270 runs in 5 matches, at 67.50. However, it will be tough to say it was as belligerent as his 36-ball 51 at Sydney, laced with 4 sixes. This series, however, will be remembered as the first in which Head made a strong mark. He also chipped in with 4 wickets.

Usman Khawaja (3/10): Dropped for the final game, Khawaja did not see any change in his reputation as a limited-overs batsman. He got several strong starts, with Khawaja rotating the strike well and finding the gaps as easily as he himself had set the field. However, 56 runs in 3 ODIs certainly do not prove this.

Chris Lynn (4/10): The BBL star got only one match in his debut series, as he bowed out due to a neck injury. He made a positive start in the first game, coming out to bat at No. 4 and showing intent right from the beginning.

Steven Smith (8/10): The skipper fought hard at Melbourne, but his grave mistake of dropping an early catch of Mohammad Hafeez in the second ODI proved to be regressive. Smith roared back in the third game at Perth with an unbeaten hundred in Australia’s chase. Smith was spot on with the selection of the team, resting Josh Hazlewood and Mitchell Starc, as well as the rotation in batting order of Head and Peter Handscomb. Smith scored 221 at 55.25 with one century and a fifty.

Peter Handscomb (7/10): He rode on two lifelines in the Perth ODI to score an 82, but could manage only one run in the next two games, batting only once. His 82 was a reminiscent of how well he batted in the Test series, using the depth of the crease and relying more on rotation of the strike.

Mitchell Marsh (0.5/10): Australia s preferred all-rounder scored 4 runs in 2 games, and bowled 12 overs for 1 wicket. Marsh bowled out due to an injury that paved a way for Handscomb to come into the side. It remained a mystery why he was selected at first and even for the trip to India despite failing on plenty of opportunities across formats.

Glenn Maxwell (7/10): This series marked the rise of Maxwell back into prominence. In the first ODI, with Australia s back pressed firmly against the wall, Maxwell bailed them out of the jail with a quickfire 60, leading their fightback. In the fourth ODI, he helped Australia seal their series win with a marvellous 44-ball 78. Maxwell did not bowl in any game.

Matthew Wade (7/10): After two poor Test series with the bat, coming out to score a century in the last over of the innings, leading the team s fightback was more than remarkable. Wade s century powered Australia to a win in the first game. Even in the second ODI, he contributed with 35.

James Faulkner (5/10): His four-wicket haul in Australia s first ODI win remained the most special performance from the all-rounder. Faulkner, however, disappointed with the bat when he failed to utilise a chance of getting some crucial runs in the second game despite having plenty of overs in the bank.

Mitchell Starc (5/10): He had an ordinary series. In the final match, Starc finished with a 4-wicket haul that took his tally to 9 wickets in 5 matches, which happens to be Australia s best bowling performance.

Pat Cummins (5/10): He claimed 7 wickets in the series, but most importantly, he did not face any fitness issues and featured in all 5 games. Cummins 7 wickets came at 32.57, but his economy of 4.88 remained impressive.

Josh Hazlewood (5/10): He finished with an impressive 3 for 32 in the third ODI at Perth, which set up a good platform for Australia s win. He was able to keep a lid on the nervous Pakistani batsmen, who found scoring against him tough, but could not keep Sharjeel Khan quiet. Sharjeel got runs easily off Hazlewood on more than one occasion.

Adam Zampa (4/10): Featuring in the last two games, Zampa made an ordinary start to 2017 after finishing as the highest wicket-taker in the previous year. He returned with 3 for 55 off 10 overs at Sydney. In the final ODI, Zampa was plundered for 1 for 61 off his 10 overs.

Marcus Stoinis: Drafted into the side in place of the injured Mitchell Marsh, Stoinis remained on the bench.

Let us now take a look at the performances of the Pakistani cricketers, keeping in mind they suffered 4 defeats but also rewrote history books with their win at Melbourne.

Azhar Ali (2/10): The Pakistani skipper failed to carry his Test form into the ODI series. He missed two games, one in which Pakistan registered an impressive win and the next in which they disintegrated. He managed a mere 37 runs in the rest of the 3 ODIs, and did nothing notable as a captain to inspire his team which remained mediocre. Among the many Pakistani cricketers, Azhar too made errors in the field.

Sharjeel Khan (7/10): The explosive batsman lived up to his reputation with 250 runs in 5 matches, with the highest of 79 that came in the final ODI. Sharjeel showed no nervousness against anything that Australia threw at him and smacked 3 fifties in an otherwise disappointing series for Pakistan.

Mohammad Hafeez (6/10): The ODI series witnessed two different forms of Hafeez. The first was seen in the second ODI when stepping in for Azhar; he fought tooth and nails with the Australians to guide Pakistan to their first win in Australia in 12 years. Expectations remained high from Hafeez for the remainder of the series, but it ended up in disappointment. Hafeez got 123 runs in 5 matches at 24.60, and remained wicketless on his return to bowling in international cricket.

Babar Azam (8/10): Putting behind a disappointing series, Babar top scored for Pakistan with 282 runs in 5 matches at 56.40. He scored a gritty century in the final ODI, but had missed out on one when he fell for 84 in the third ODI. He got starts in other games but failed to convert.

Shoaib Malik (5/10): The venerable cricketer in the Pakistani ranks played a handy knock in their historic win at Melbourne, but he remained guilty of failing to convert starts. He scored 138 runs in 4 games with the highest of 47. Malik claimed 1 wicket as a part-time spinner.

Asad Shafiq (2/10): With 18 runs in 2 games, Shafiq let himself down in the ODI series after having a successful run in the Test series.

Umar Akmal (3/10): Playing in his first match since the 2015 World Cup, Akmal did nothing noteworthy to make his selection count. Akmal scored 131 runs in 5 games at 32.75, which remained poor numbers for a batsman as experienced as him in a series that had almost all wickets as haven for batsmen.

Mohammad Rizwan (4/10): Pakistan missed their experienced campaigner and fighter in Sarfraz Ahmed dearly. Rizwan filled in for the first-choice Sarfraz, got a poor 51 runs in 4 innings and made no mistakes behind the wickets.

Imad Wasim (4/10): A player with such rich reputation should ideally have had at least one good game, but Imad showed his limitations as an all-rounder. He was able to strangulate Australians in a couple of matches early on with his disciplined spin, but he let his team down many a times with the bat.

Wahab Riaz (2/10): The most experienced Pakistani pacer made most mistakes throughout the tour. Riaz was plundered for 104 runs in 16 overs that he bowled in 2 games.

Mohammad Aamer (7/10): After an ordinary Test series, Aamer showed his mettle with the white ball, creating a lot of worries for the left-handed opening pair of Warner-Khawaja as well as Warner-Head. He was very effective against Warner early on and ended the series with 8 wickets in 5 matches.

Junaid Khan (5/10): Making a terrific comeback into the Pakistani side, Junaid had a topsy-turvy ride. He claimed 2 early wickets in the second ODI, setting the tone for his team s win. However, far too many mistakes along the road spoiled his party, and Junaid finished with 5 wickets in 4 matches.

Hasan Ali (7/10): He became the first Pakistani since Shoaib Akhtar to take a five-for in ODIs in Australia since June 2002, but in the same match the fourth ODI at Sydney Hasan dropped two easy catches that took the sheen off his effort. Hasan, however, finished with 12 wickets in 5 games, which is the best performance from any bowler from either side.

Rahat Ali, Sarfraz Ahmed and Mohammad Irfan: Rahat remained out of favour having featured in the first Test. On the other hand, Sarfraz and Irfan were forced to return home due to their family emergencies and did not take part in the ODIs. 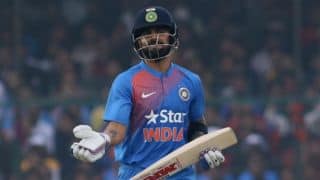 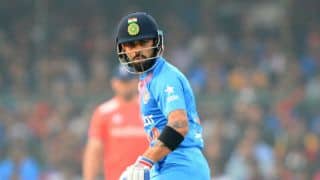 Virat Kohli: I have no urge to open, I play at No 3