The final Test between Australia and South Africa at Adelaide is taking interesting turns as it progresses. From Faf du Plessis century to Usman Khawaja s resilient knock, Day Two saw Australia take commanding position over Proteas at Adelaide Oval. One could also witness a very composed captain Steven Smith leading from the front and complimenting Khawaja, even as he continues to face criticisms from the former cricketers over his captaincy. South Africa, on the other hand, experimented with their bowling unit, achieving success at regular intervals. However, the honours were taken by Australia with Khawaja s unbeaten 138 and tail-ender Mitchell Starc s gritty 16. Australia managed to take a decent lead of 48 runs to stay ahead of South Africa. FULL CRICKET SCORECARD: Australia vs South Africa, third Test, Day One at Adelaide

Apart from the usual heroics, the game witnessed some interesting moments too. Some were delightful, some were heartbreaking and some were entertaining. We already saw du Plessis proving his mettle with his century after a turbulent week the captain had. But the tactics pink-ball can compel the captain to enforce can be funny. From Australian legend Richie Benaud s face on Australian coins, Khawaja the lone warrior, South Africa s surprise package and Peter Handscomb s fine fifty, Day Two saw it all. Here are the pick of the moments:

Kyle Abbott-Dean Elgar clash with Australia: The new ball was taken on Day Two afternoon. After declaring the innings for 259 for 9 on Day One, South Africa were in a fix as the hosts opening batsmen Khawaja and Matt Renshaw continued with their gritty stand. Adding 19 runs for the opening wicket, Australia lost their first wicket of Renshaw for 10. Abbott was the bowler brought into attack and a dive towards his right by Dean Elgar at the third slip, was enough to achieve South Africa s first breakthrough.

New No.3 batsman David Warner s delayed entry had already left the Australian s fuming. Warner, known for his aggressive approach, was knocked out too soon with no boundaries to his name. Warner was caught in similar fashion by Elgar at the third slip and was taken by Abbott. Rare occurrences that happen during Tests!

Usman Khawaja the lone survivor: Had it not been for Khawaja s patient and resilient knock, Australia would have been unable to build the required lead with the fall of wickets. Khawaja on his path to his fifth century built 50 or more runs stand with few of his teammates. From Smith s century stand to 99-run stand with Handscomb and now unbeaten 35-run stand with Starc, Khawaja saw it all. Yet he has carried the bat until end of Day Two and is still going strong on 138.

Khawaja has also been the highest run-scorer for the side despite Australia s troubled series. He has a tally of 307 so far in this series. Can Khawaja be the man to turn the tides for Australia in the final Test?

Hashim Amla s sloppy moment: When was the last time one saw Amla going past the fifty-run mark? His recent score in the series against Australia read: 0, 1, 47 and 5 and raise questions on the cricketer s consistency. Apart from consistency, Amla was also sloppy with his fielding skills at the slip. One of the deliveries came flying towards Amla s right, bounced off the palm and the chance was missed. Another chance after the ball bounced off the palm and slight imbalance led to dropping a crucial wicket.

Amla has been disappointing in the series barring the Hobart innings. If there is anyway Amla can recover, it will be in the final innings of South Africa.

Temba Bavuma can bowl? Yes, you read it right. One was astonished when du Plessis was compelled to bring this weapon against the mighty Australian batting unit. Interestingly, Bavuma bowled the perfect length and was going at 112 kph with his deliveries. In his first spell he only conceded a run.

What the fans, who thrive on cricket, found funny was Bavuma, who struggles to celebrate with his teammates on fall of wickets and jumps to hi-fi his counterparts, was seen bowling medium-pace. It was indeed a moment that brought smile to many faces.

Handscomb has spectators rooting for this moment. While his mother shed happy tears, girlfriend Sarah along with friend Daniel Forbes applauded on this special occasion. However, this struggle was nothing in comparison to mental struggle the youngster was going through. His family is just few days away from observing his father’s first death anniversary. John Handscomb, who passed away due to cancer, had been keen watcher at Junction Oval. He would often watch his guy skate to new level at St Kilda.

Surprisingly, his girlfriend Sarah is a talented equestrian rider and had all the opportunity to take it big at Rio. Sadly, due to a horrific horse injury, it just remained a dream.

Richie Benaud impersonators : Amidst the serious match going around, some members in Adelaide crowd were trying various methods to entertain the fellow spectators. On Day One, a group named Richies was seen dressed up as the former Australian cricketer and watching the play at twilight from the Adelaide Oval RoofClimb. Also known as voice of cricket by many, Benaud found his face on new Australian 50 cent coins inspired by his statistical career. 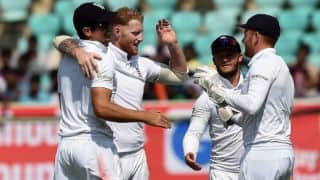