If there is an effusion of AB de Villiers' ethereal talent, then Australia will have to figure out unorthodox ways to combat his flawless batting abilities.

Australia and South Africa will lock horns in the third One-Day International (ODI) of the Tri-Nations series on Tuesday. The venue is Providence Stadium in Guyana. It is the first time when these two teams will face each other in the series. Australia will be sanguine after their 6-wicket victory over West Indies in the previous game. South Africa, on the other hand, lost the series opener against the Caribbeans by 4 wickets. Australia and South Africa are both touring sides which will negate the crowd factor to some extent. Bhaskar Narayan takes a closer look at the 11 players, who are most likely to feature for the Proteas in this crucial clash. Full Cricket Scorecard: Australia vs West Indies, Tri-Nation Series 2016, Match 3 at Guyana

Top-order: Quinton de Kock and Hashim Amla will continue to open South Africa’s innings with Rilee Rossouw coming one-down. All three of them got starts in the match against West Indies, but could not carry on from there on wards. Though Rossouw scored a half century, he could have certainly got to three figures with some better application on his part. It is of paramount importance for the Proteas this time around that at least one of them scores a century. This will ease the pressure on the middle-order batsmen.

Middle-order: AB de Villiers, the South African skipper, widely considered as a divinely gifted batsman, perhaps the best of the current era, will bat at No. 4. If there is an effusion of his ethereal talent at Guyana, then Australia will have to figure out unorthodox ways to combat his flawless batting abilities. Sometimes this appears to be easier said than done, since it’s the Aussies. Things might get difficult for them if de Villiers is able to pull off his idiosyncratic blend of both conventional and out of the ordinary strokes.

JP Duminy will come next in the batting order. The left-hander’s skill at executing a variety of strokes coupled with his handy off-break bowling is always an asset for the team. Farhaan Behardien is likely to be dropped from this match in favour of Tabraiz Shamsi. This could have weakened the batting, but owing to Behardien’s poor form, it appears to be the right decision. Bowling all-rounder Chris Morris and pacer Kyle Abbot will ideally bat at No. 6 and 7 respectively.

Bowling: Abbott and Kagiso Rabada will share the new ball while Morris is likely to be the first change. Imran Tahir might be introduced before Morris if Australians get off to a good start, or the pitch offers some brilliant assistance to spin bowling. Aaron Phangiso with his slow left-arm orthodox bowling will complement Tahir. The spinner took a three-wicket haul in the previous game, and is expected to play a key role in the game against Australia as well. With Shamsi in the playing 11, South Africa have two chinamen in their side, which will be beneficial against those Australian batters who find it difficult handling left-arm spin. Duminy will pitch in the middle overs like he did in the last match. 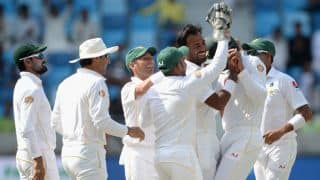